Army murders and the burning of state property along Ratchadamnoen Road (above) took place in 1992, as Thai people fought for their democratic rights in a traumatic uprising known as Black May. (Bangkok Post file photos)

Thammasat law lecturer and Nitirat group leader Worachet Pakeerut has warned against appointing an outsider prime minister after the election, saying the country should have learnt its lesson after the bloodshed of Black May in 1992.

Referring to reports some political groups, as well as a majority of respondents in a new poll, would support Gen Prayut Chan-o-cha to return as prime minister, Mr Worachet said the country should remember what happened in 1992.

The lecturer also mentioned he is not confident that the election will be held in February as promised by the prime minister. "Everything depends on the group of people holding power," said Mr Worachet. "But the election can't be postponed indefinitely. In the end it must be held."

The Black May incident came after Gen Suchinda Kraprayoon, then army chief and a key coup leader, was chosen by parliament to become the country's 19th prime minister in 1992.

Earlier that year, the pro-military Samakkhi Tham Party won the most House seats in the March 22 general election and joined four other parties to form a coalition government.

But Samakkhi Tham leader Narong Wongwan's hopes of becoming prime minister were shattered when the US State Department denied him an entry visa to the US owing to his alleged links with the drug trade; a scandal which led to Gen Suchinda, who was not an MP, being chosen as premier.

While the coup-sponsored constitution of 1991 did not prohibit a non-elected outsider from becoming prime minister, Gen Suchinda's decision to assume the premiership was regarded as an attempt to prolong the military's grip on power.

As a result, those who disagreed with the appointment took to the streets, prompting anti-Suchinda rallies which began in mid-April of the same year.

The protesters were met with a military crackdown, which resulted in the deaths of more than 40 demonstrators, a similar number missing and 1,000 wounded.

Gen Suchinda resigned on May 24, after only 47 days in power. 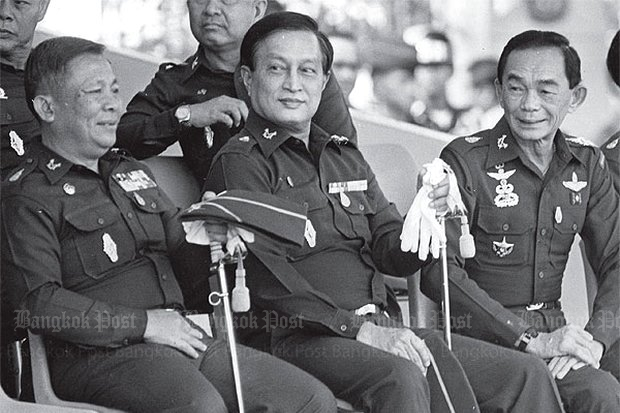 Coupmaker Gen Suchinda Krapayoon (centre) became too smug and overplayed his advantage when he tried to become prime minister, sparking the Black May revolution. In the photo, Gen Suchinda is flanked by fellow members of the junta, then known as the National Peacekeeping Council (NPKC), Gen Sunthorn Kongsompong, right, and Gen Issarapong Noonpakdee.

Many groups which have registered as political parties have made clear that they would not shun the possibility of supporting an outsider to become the prime minister.

According to the charter's Section 88, before general election campaigns begin, every party must declare up to three prime ministerial candidates to the EC.

However, in the event the Lower House cannot reach a consensus on who should be prime minister according to the list of candidates, Section 88 can be exempted if at least half of the MPs petition the Senate and the House. MPs can then nominate someone not attached to any party to lead the nation.

Meanwhile, Gen Prayut on Monday shrugged off a National Institute of Development Administration (Nida) poll which revealed that he was the most popular choice for prime minister among the respondents.

The opinion poll, which surveyed 1,250 people across the country, was conducted from March 15-16.

Speaking during a meeting with a group of Thais in Australia while attending the Asean-Australia Summit at the weekend, Gen Prayut also said parties would be called for talks in June to give their thoughts on the country's development.

This proposal, however, has drawn flak from the Pheu Thai Party.

Key Pheu Thai figure Noppadon Pattama said the regime would be better off lifting restrictions on political activities, so that the parties can prepare for the election.

After the political ban is lifted, parties will be able to present their policies directly to the people for consideration, he said.

The regime's main duty is to ensure the election will be free and fair, he noted.

Referring to the prime minister's comments on efforts to ease political division, Mr Noppadol said the regime has made little progress in fostering national reconciliation over its past four years in office.

The regime should allow people to have the space to voice their views, avoid using hate speech against politicians and give parties a chance to get their affairs in line with the roadmap, he said.

Somkid Cheukong, a former Pheu Thai MP for Ubon Ratchathani, said he was suspicious as to why the regime would call such a meeting, saying all parties already have their own plans to take Thailand forward.

Also Monday, another four people attending a pro-election gathering in front of Central shopping mall in Pattaya on March 4 were summoned by police.

Three others -- political activist Sirawith "Ja New" Seritiwat, Wanchaloem Khunsaen and Chidapha Thanahatthachai -- were earlier summoned by police and they reported to officers on Sunday to acknowledge a charge of violating the ban on political gatherings.