Around 600 trained counter-protest police, including from the Border Patrol Police (BPP) and other elite units, were brought in to handle last Saturday's largest-ever public protest against the regime in a peaceful manner. (Photo by Apichit Jinakul)

Prime Minister Prayut Chan-o-cha has ordered security forces to closely monitor political groups which are currently launching campaigns to unseat the National Council for Peace and Order (NCPO), according to a government spokesman.

Lt Gen Sansern Kaewkamnerd, speaking Sunday, said he was quoting the response of Gen Prayut, who is head of the NCPO, to anti-military activists who have stated that they will stage a prolonged rally in May to oust the regime ahead of the fourth anniversary of the May 22, 2014 coup.

Their announcement was made after Saturday night's rally by two emerging political groups -- the Democracy Restoration Group (DRG) and Start Up People.

The DRG is led by Rangsiman Rome while Start Up People is headed by Sirawith Seritiwat. Both are politically active university students who hold an anti-military stance. The two were among several political activists released on bail after leading recent rallies against the NCPO despite the ban on political gatherings of five people or more.

On Saturday, in a bid to challenge the NCPO, the protesters broke through security barriers and gathered in front of the Royal Thai Army headquarters on Ratchadamnoen Avenue to demand that the election be held this year.

Closely monitored by 600 police and security officers, around 400 activists had marched from Thammasat University's Tha Prachan campus to the army headquarters, calling on the army to stop supporting the regime. 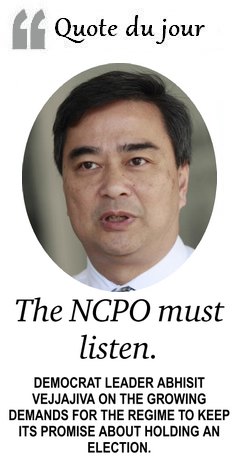 Gen Prayut reportedly ordered security forces and ant-riot police to use "extreme caution" when dealing with these activists.

"The PM also said that people are beginning to worry that those haunting old scenes [of political unrest] are recurring, so he is encouraging everyone to think twice about what they should and shouldn't do to keep the country moving forward," Lt Gen Sansern said.

"The government and the NCPO will try their very best to not to allow the nation to slip back into the same vicious circle," Gen Prayut was quoted by Lt Gen Sansern as saying.

Gen Prayut also admitted that are currently some groups attempting to stir up unrest and that their activities are expected to escalate.

"I believe most people now understand well that Thailand is heading towards an election as planned in the country's roadmap. The important mission of the NCPO, which stepped in to take on a caretaker role, is now to do its utmost to get the country back to being a 'complete democracy'," Gen Prayut was quoted as saying.

"So, if the unrest continues to rage, is it likely an election can proceed smoothly?" asked Gen Prayut.

Maj Gen Piyaphong Klinphan, chief of the 11th Military Circle in his capacity as a member of the NCPO's spokesman team, said security officials are gathering evidence and witness statements to take legal action, if necessary, against those who took part part in the protests.

In response to the two points raised by the groups, Maj Gen Piyaphong insisted an election will "definitely" take place according to the roadmap, and rejected calls for the army to withdraw support for the NCPO saying the two are "inseparable".

On Sunday, Democrat Party leader Abhisit Vejjajiva said that the NCPO should listen to the protesters and avoid excessive use of its Section 44 powers.

The education minister has instructed state agencies to launch a probe into a school director and a teacher who allegedly cut students' hair as punishment.

The police and the Department of Land Transport signed a memorandum of understanding on sharing electronic data to bolster law enforcement against those who fail to pay fines.