The two were charged with breaking Section 61 (2) of the law when they wore “Vote No” T-shirts and handed out leaflets on “7 reasons why we shouldn’t accept charter”, an infographic prepared by the New Democracy Movement (NDM), at Phu Khieo fresh market in Chaiyaphum province on Aug 6, 2016, one day before the referendum vote.

The offence is punishable by a jail term up to 10 years.

The activists were also charged with disobeying an order of 2006 coupmakers when they refused to be fingerprinted when asked by officials, punishable by six months in prison or a fine not more than 1,000 baht.

The Phu Khieo court on Thursday found the two defendants did hand out the leaflets but the distribution was in line with the exercise of rights and freedom under Section 7 of the public referendum law.

Their acts were not considered inciting the public and were just an expression of opinions allowed under the law, the court said.

The content of the leaflets was also not distorted, just opinions, the court added.

For these reasons, it dismissed the charges against the two defendants.

The court's opinions are different from that of constitution writers and election commissioners, who decided in July 2016 the NDM document contained lies and distorted information and could not be handed out in public places.

For the fingerprint charges, the court found them guilty and fined them 1,000 baht each, halved because they confessed.

Jatupat is serving a 2½-year jail term in Khon Kaen for lese majeste.

Below: The '7 reasons why we shouldn't accept charter' infographic handed out by student activists Jatupat Boonpattararaksa and Vasin Prommanee in Chaiyaphum on Aug 6, 2016. (FB/Rangsiman Rome) 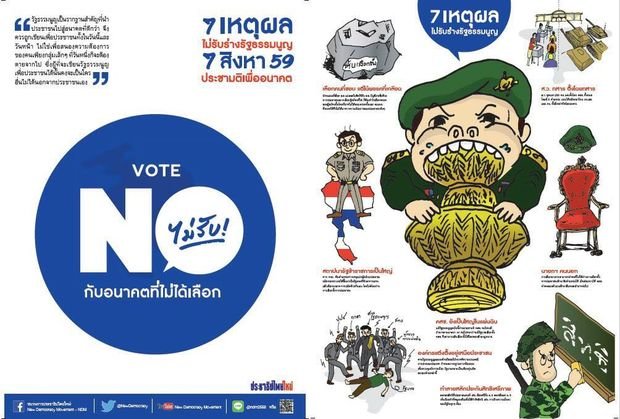