The army chief has insisted that the military is not using its resources and personnel to help the government score political points. 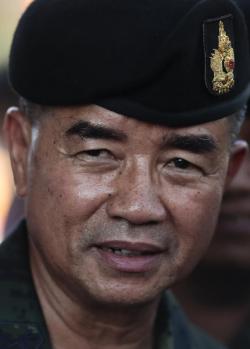 Army chief Chalermchai Sitthisad, who also serves as secretary-general of the National Council for Peace and Order (NCPO), said yesterday there was nothing political about the army's campaign to publicise the government's work in the provinces.

He denied that the army was mobilising to help Prime Minister Prayut Chan-o-cha gain the upper hand over political rivals as reports once again emerged of a pro-regime political party being formed to back Gen Prayut to return as prime minister in the next election expected to be held in February next year.

Gen Chalermchai said the army's campaign is not aimed specifically at publicising the government's Thai Niyom Yangyuen development programme, but for promoting projects aimed at restoring national unity as well as advertising the army's activities such as military conscription.

It is incumbent upon the army to support national development efforts, the army chief said.

"It is a long-term strategy which I have conceived and I want it to continue over a span of five to 10 years. It is not merely for the sake of the Thai Niyom programme,'' Gen Chalermchai said.

Under the campaign, teams of army personnel responsible for handling civilian affairs will be sent to meet local people, listen to their problems, explain what the government has done and find ways to improve their livelihoods, he said.

The Internal Security Operations Command will then work with the army's 35 military circles nationwide to finalise details regarding budget allocations and action plans that will suit the different natures of the problems facing each particular province, the army chief said.

The regulations will be forwarded to the EC for consideration after the organic bill on the election of MPs takes effect. Currently, the bill, which earlier cleared the National Legislative Assembly, is now with the Constitutional Court which has been asked by the lawmakers to rule on its legality.

Mr Dusadee also said the EC will have to draw up separate regulations regarding the protection of witnesses in election fraud cases and the concealment of their identities.

After the regulations are announced, a committee will be set up to determine the rates of reward, depending on how tough the handling of each particular poll fraud case will be, he said.

Government spokesman Sansern Kaewkamnerd yesterday said the prime minister had not given any special instructions to keep a close watch on the movements of parties.

Lt Gen Sansern said politicians who are pressuring the government over the election should be patient as the countdown to the poll will begin in the next few months.

This dialogue will be essential for accommodating the needs of all political parties and removing obstacles that might prevent the poll from being held by the February deadline, he said.

The parties have urged the NCPO to lift the political activity ban which they say is hindering their preparations.