The National Council for Peace and Order (NCPO) has pressed four charges against Pheu Thai Party members for holding a press conference in Bangkok Thursday during which they spoke out against the regime over its four-year stint running the country.

Makkasan police officers were dispatched to the party's headquarters on Phetchaburi Road to issue a warning that it was in violation of Order No.3/2015, which bans political gatherings of five or more people, among other transgressions, but the conference went ahead anyway.

Next Tuesday marks the fourth anniversary of the 2014 coup the NCPO engineered.

According to Col Burin Thongpraphai, chief of the NCPO's legal team, the party was also charged with violating Order No.57/2014, which bans parties from conducting political activities; Section 116 of the Criminal Code for sedition; and the Computer Crime Act, by publicising the event on its official website.

After hearing the police warning the party cut the number of speakers to three and officers were assigned to listen in. The three speakers were Chusak Sirinil, Chaturon Chaisang and Watana Muangsook.

Mr Chusak said the party was confident it had sufficient grounds on which to defend itself because the constitution guarantees it the right to freedom of expression. The party has organised similar activities in the past without incident, he added.

At the conference, the party said the NCPO had failed in its bid to reconcile the nation since it rose to power in a bloodless coup in 2014.

It also blamed the regime for failing to restore democracy, as promised, by continually delaying the general election and invoking a law to weaken the power of existing political parties.

As a final blow, Pheu Thai said the NCPO has failed to protect the basic rights of the public, as it put together an argument that the regime was resetting the rules to prolong its grip on power.

Mr Chusak said the NCPO vowed not to extend its use of absolute power but it appears to have reneged on this promise, which was made shortly after it seized power on May 22, 2014.

It has also been insincere in its efforts to foster unity while becoming embroiled in multiple conflicts of its own, Mr Chusak said.

He said the NCPO pledged to restore democracy within 15 months but now four years have gone by and people are still speculating as to whether the poll scheduled for next February will materialise as promised. The election has been delayed four times.

The new constitution, which was promulgated last year, a law on political parties and some other government orders were designed to undermine the power of existing parties, Mr Chusak said. 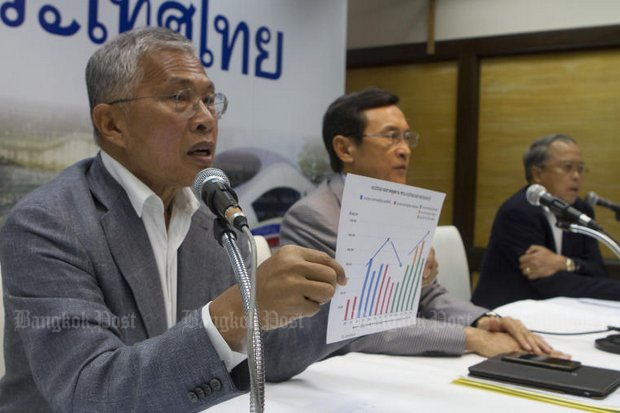 Warned that a meeting of more than four was illegal, Pheu Thai proceeded with three core members leading the discussion. From left, Watana Muangsook, Chaturon Chaisang and Chusak Sirinil. (Photo by Pawat Laopaisarntaksin)

Mr Chaturon said the public's rights and freedom have been infringed upon. He accused the NCPO of using undemocratic means to potentially try and stay in power after the election.

Mr Watana said the conference was intended to inform the public about the NCPO's performance. It should be subject to scrutiny but is instead resorting to tactics to silence its critics, he added.

Responding to such criticism, Deputy Prime Minister Prawit Wongsuwon said the NCPO has restored order and brought an end to disunity in the country.

It has also attempted to solve a number of pressing economic problems through various initiatives, he said, citing projects that offer jobs to local communities and the restructuring of the agricultural sector.

Gen Prawit, who is also the defence minister, said the ban on political activities will not be fully lifted in June -- as was hoped -- when the NCPO is due to meet with parties to discuss the matter.

"It cannot be 100% revoked. We have to consider allowing the parties to resume their activities on a gradual basis," Gen Prawit said.

A poll conducted by the Ministry of Public Health shows more than half of Thais are confident in the government's measures to deal with a second wave of the Covid-19 pandemic, yet are worried about the public letting its guard down.