Chusak Sirinil (centre) and other key Pheu Thai Party members speak to reporters at the Crime Suppression Division in Bangkok on Monday. (Photo by Apichit Jinakul)

Three politicians from the party ousted by Thailand's generals were charged on Monday with sedition for holding a press conference, as dissent grows before the fourth anniversary of the junta's 2014 coup.

The military filed a case after senior Pheu Thai figures railed against the coup organisers at their party's headquarters last week, blasting the generals for breaking repeated promises to restore democracy, despite a police warning not to proceed.

On Monday Pheu Thai's Watana Muangsook, Chaturon Chaisang and Chusak Sirinil were all charged with sedition for speaking at the press conference, while five other party leaders were charged with violating the ban on gatherings for attending.

"They were summoned to hear charges that were filed by the (junta) on Thursday," said deputy national police chief Srivara Rangsibhramanakul.

The Pheu Thai veterans kept up their criticism of the military as they cut through a crowd gathered outside the police office and shouting "Fight, fight!" in support.

"This government abuses the laws. They use laws to prevent people from investigating (them)," said Pheu Thai's secretary general Phumtham Wechayachai, adding that nothing they'd done had broken the law. 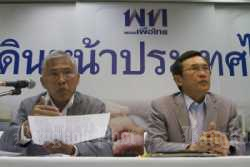 “Only three of our party members spoke about the government's performance for the last four years and how unsuccessful they are. Why would that be counted as an overthrow (of the government) or an incitement? To give us trouble and dissolve our party? I don't think that the government dares to do so under the watchful eyes of the people,” he said.

Junta leader Prayut Chan-o-cha, who staged the coup and is now prime minister, has said elections would be held in February but he is not widely believed after repeatedly reneging on promised poll dates.

Tuesday is the fourth anniversary of a coup that was initially welcomed in some quarters as a circuit breaker to months of street protests. But even former coup supporters are increasingly dissatisfied with the junta as corruption scandals and broken promises of reform and reconciliation pile up.

Since the coup, the junta has dominated political life, banning political party activities and outlawing any political gathering of five or more people.

Pheu Thai is allied with Thaksin Shinawatra, the billionaire populist prime minister who was ousted in a 2006 coup and lives abroad in self-imposed exile. His younger sister, Yingluck Shinawatra, had headed the government ousted in 2014.

At the news conference, party members attacked the junta for failing to solve economic problems, violating human rights and paying lip service to promises to combat corruption and heal the country's deep political divide. It is the duty of all Thais to “not allow dictatorship to destroy our democracy,” they said.

The pro-democracy movement, which is led by a dedicated cohort of student activists, said they have come under increasing surveillance before their planned march.

In a statement the activists said their sound technician was taken to a military camp on Sunday night.

He was released on Monday, according to a group of human rights lawyers, who say more than 50 people have been visited, called or monitored by security officers since May 17.

A junta spokesman could not be reached for comment.

Titipol Phakdeewanich, a politics professor based in Thailand's rural northeast, said officers had been visiting local activists in the region, a Pheu Thai stronghold.