An image captured from a video clip taken at the first meeting of Future Forward party on May 27. (Facebook@TheFutureWeWantPage)

The army chief has dismissed a claim by Future Forward that the party's members were intimidated by authorities and challenged the group to come up with evidence.

The progressive party posted a statement on its Facebook late on Monday urging authorities to stop harassing the attendants of its inaugural meeting on May 27 at Thammasat University Rangsit Campus. 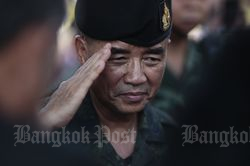 Some 3,000 people joined the gathering during which 700 co-founding members voted on the ideology, principles, policy guidelines and regulations and elected party executives, according to the statement.

"In addition to police who came to provide security, plainclothes and uniformed officials mingled with the crowd and took a lot of photos during the meeting. They also took snapshots of the licence plates of cars parked around the gymnasium.

"A few days later, several founding members were visited by officials and intimidated," the statement read.

"Nobody has done such a thing. If there is evidence authorities behaved that way, they can take photos and report to us so we can take punitive action." he said.

However, Gen Chalermchai, who is also secretary-general of the National Council for Peace and Order, admitted some units might have been there to gather intelligence as part of their routine jobs but there was no cause for intimidation.

"I understand Future Forward stands opposite us. The more we use absolute power [against it], the more popular it will become so we have to tread carefully. New parties generally need to find dramatic ways to attract attention and compassion regardless of whether [their claims are] true or false so the media should not fall for it," he said.