Deputy Prime Minister Somkid Jatusripitak has ordered the Ministry of Transport to complete the auctions of all the ministry's planned transport projects before the general election tentatively scheduled for next February.

The bids for transportation development projects need to be rolled out urgently before the end of this year, Mr Somkid told officials during his visit to the ministry on Wednesday.

"Thailand must be a main hub among the CLMVT [Cambodia, Laos, Myanmar, Vietnam and Thailand] countries, and this is why all these transport projects must be put up for bidding within seven to eight months before we [the current government] leave," Mr Somkid said.

"Rail transport will be the key player here. All projects must be completed as soon as possible, with countrywide connectivity the main goal," he added.

Mr Somkid pushed the ministry to press on with the bidding for the planned high-speed railway from Bangkok to Hua Hin in Prachuap Khiri Khan province, which forms part of the government's much-touted "Thailand Riviera" project. 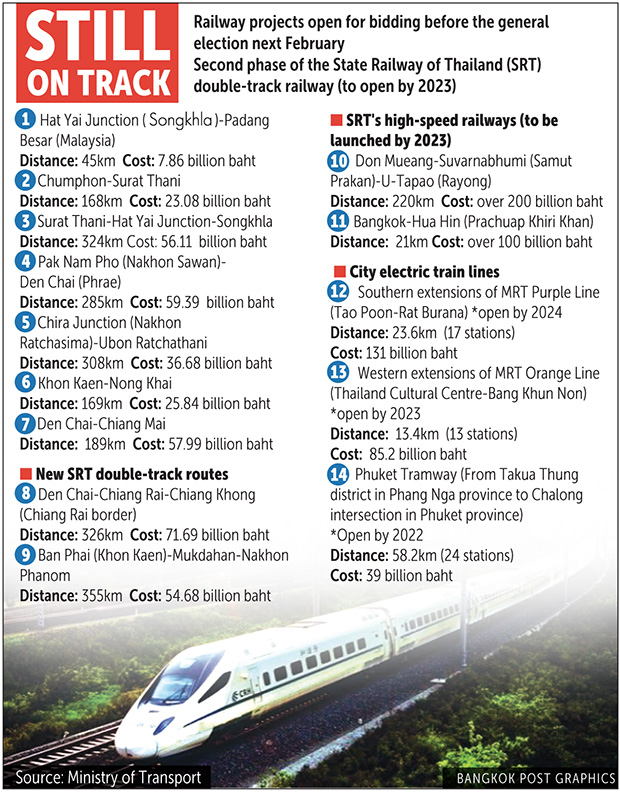 The plan involves a high-end tourism campaign through commercialising land and coastline on the west coast, from Phetchaburi to Chumphon.

The 211km Bangkok-Hua Hin high-speed railway has been valued at over 100 billion baht, and hopes are that it will be operational by 2023.

The project is currently under review by the Public-Private Partnership board. The State Railway of Thailand planned to start the bidding for the Bangkok-Hua Hin route in the middle of next year.

Mr Somkid suggested the route be extended from Hua Hin to Surat Thani to maximise its potential.

Transport Minister Arkhom Termpittayapaisith said during the visit that the ministry is looking to submit plans for nine double-track railway routes to the cabinet for approval by the end of the year.

Mr Arkhom explained that the State Railway of Thailand had to revise part of the design for the routes after a request from the National Economic and Social Development Board.