Prime Minister Prayut Chan-o-cha took the cabinet to Amnat Charoen province on Monday, where he spoke to a meeting of local residents. (Photo courtesy Government House)

Prime Minister Prayut Chan-o-cha vowed Monday to visit the provinces even more frequently -- in the name of educating voters ahead of the next general election.

Gen Prayut has been accused of exploiting a recent series of mobile cabinet meetings to various parts of Thailand to canvass support for a new political party that may support the regime.

But the premier dismissed such talk as groundless.

"As the poll draws near, I'll need to make more trips to the provinces to improve voters' understanding of the coming election," the prime minister said while visiting the northeastern province of Amnat Charoen for a two-day mobile cabinet meeting that also takes in Ubon Ratchathani. It wraps up Tuesday.

"When the country has a new elected government, it will have to be the kind that can travel everywhere. Wherever there are people who hate me, I will visit them, too," he said.

He blamed society's ills on the public choosing "the wrong leaders" and suggested in future they select a more "responsible" prime minister.

Gen Prayut said he has received investment proposals from provinces in the region totalling 10 billion baht but stressed that he would not be "giving away" millions of baht from state coffers to woo voters.

Areas covered include new railways, roads, the tourism industry and water management projects, he said, adding that he would sift through them all and prioritise those that address real problems.

His remark was greeted with a stern reaction by politicians, who said Gen Prayut had now become a "real politician".

Samart Kaewmeechai, a former Pheu Thai Party MP for Chiang Rai, said anyone who intends to enter politics should not abuse their position as a state official for political gain at the expense of rivals, and referred to the regime's long-held ban that prohibits parties from engaging in political activities. 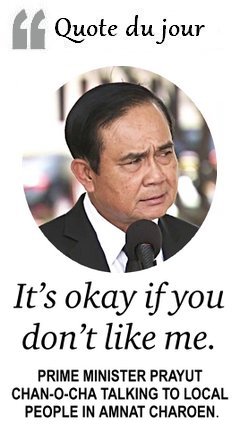 He described the current situation as unfair as it appears to be giving the regime an advantage everyone else is legally prohibited from enjoying.

"Let's make it a fair deal. I don't think that's too much to ask for. Just lift the ban and allow political parties to resume their normal activities," he said.

"Give us, too, the chance to visit rural folk and improve their understanding."

The ban means they can't convene meetings of party executives or formally recruiting new members, among other restrictions.

Wirat Kalayasiri, part of the Democrat Party's legal team, echoed Mr Samart's call to terminate the ban that was put in place by the National Council for Peace and Order.

All political parties need to hold a formal meeting of their executives to amend their party regulations so they can recruit new members, which is key to preparing for the next election, Mr Wirat said.

"Anyone who wants to enter politics should make their intentions known rather than trying to keep them a secret. We always welcome newcomers," he said.

A large crowd of about 1,500 people mobbed a local zoo just to get a glimpse of the premier, including Supol Fongngam, a former Pheu Thai MP, and 14 other former MPs from the same party.

They refused to speak to reporters when asked about their possible defections to a pro-Prayut political camp, saying briefly that nothing was clear at the moment and the new election constituencies have yet to be organised.

They said they were invited by provincial administrative officials to take part in the event.

Wutthipong Nambutr, a former Democrat MP for Ubon Ratchathani, said he was also invited by local administrative officials to the zoo during Gen Prayut's visit.

Mr Wutthipong said he will contest the upcoming poll under the Democrat Party's banner.

Deputy Prime Minister Gen Prawit Wongsuwon previously rejected rumours that efforts were being made to court former MPs, particularly from Pheu Thai, into the fold of the newly formed Phalang Pracharat Party.

Gen Prawit also hinted that the government did not mind if politicians wanted to meet the prime minister during his current trip but said no such meetings were on the agenda.

In previous trips it was the politicians who requested a meeting not the government, Gen Prawit said.