Workers weld rails during the construction of the Jira-Khon Kaen double-track railway at Ban Kradon station in Muang district, Nakhon Ratchasima province, on March 30 this year. The construction is part of the 23.4-billion-baht 187km railway project in collaboration with China. (Photo by Patipat Janthong)

The general election hasn’t even been scheduled yet, but several top politicians are already making China a campaign issue.

Growing Chinese investment has led military leaders to think they can boost wealth without a return to democracy, Thanathorn Juangroongruangkit, a former business executive who now leads the upstart Future Forward party, said in an interview on Wednesday. 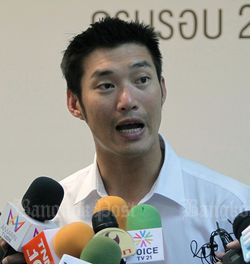 Prime Minister Prayuth Chan-o-cha said last week the election should take place on Feb 24, adding: "If we can’t do it, we will discuss that later."

The government in a January letter to the UN said it supports and values freedom of expression within the boundary of the law.

As Thailand’s relations with Western countries like the US have suffered since the 2014 coup, China’s embrace of Gen Prayut’s government has helped to strengthen bilateral ties between the two countries, seen by regular high-level visits and side meetings between senior officials.

While Thailand still participates in annual training exercises with the US, a number of key defence equipment purchases from China has also strengthened military ties between the two countries. Last year Thailand approved the purchase of 34 armoured carriers from China, as well as 28 Chinese VT-4 battle tanks, and signed a deal to buy three Chinese-made S26T submarines each worth 12 billion baht.

The government is also seeking Chinese investment to help realise a 1.7-trillion-baht development plan on the eastern seaboard. The value of foreign direct investment applications from China approved by Thailand, for the eastern economic corridor and beyond, jumped almost 1,500% in January through March from a year ago.

Government spokesman Sansern Kaewkamnerd said he could not comment on specifics of Chinese investment.

"Of course it concerns us," Mr Thanathorn, who turns 40 in November, said of China’s growing clout. "When can China best increase it’s influence? It’s here and now in Thailand."

"If we are democratic, it will open doors for all stakeholders, domestic or otherwise, to win the resources, to win the hearts and minds of the people," he said.

Mr Thanathorn said his party is confident of winning up to 40 seats in the new 500-seat lower house of parliament. He resigned all positions associated with the Thai Summit Group, an auto parts manufacturer founded by his late father. His family’s fortune was estimated at around $800 million several years ago.

People were fed up with the ruling National Council for Peace and Order, as the junta is formally known, Mr Thanathorn said.

"Everywhere you go and talk to the people, you get this kind of feeling," he said. "It’s intangible, it’s in the air, you can feel it, you can smell it."

Bhumjaithai Party leader Anutin Charnvirakul also took a shot at China in a separate interview on Thursday. His party won 11% of the vote in the 2014 election, and he expects to win a minimum of 55 seats in the new parliament. 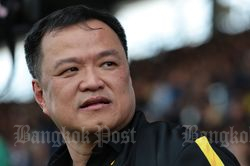 "I’m the first guy who will go against the high-speed train in this country," says Mr Anutin said. (Photo by Wichan Charoenkiatpakul)

One of his biggest priorities would be to push for Thailand to delay its involvement in expensive high-speed rail projects that would link Bangkok’s two international airports with another near the tourist hot-spot of Pattaya and another that would be part of a link to China.

"I’m the first guy who will go against the high-speed train in this country," Mr Anutin said. "It’s not the time yet."

Mr Anutin added he was yet to be convinced about the merits of the Eastern Economic Corridor. He said Thailand could follow Malaysian Prime Minister Mahathir Mohamad in cancelling China-backed projects.

"Why can’t we?" Mr Anutin said. "Using the same reason, that it is not in the best interests of our country. Things can always be altered."