Demands are rapidly escalating for the resignations of new Palang Pracharath Party leader, Industry Minister Uttama Savanayana (above) and cabinet colleagues who have openly declared as politicians campaigning for the ruling National Council for Peace and Order (NCPO). (Post Today photo)

Calls are mounting for Prime Minister Prayut Chan-o-cha and the four cabinet ministers who are at the helm of the Palang Pracharath Party to step down due to a potential conflict of interest in the lead-up to the election.

However, Prime Minister's Office Minister Kobsak Pootrakool, who was chosen as the spokesman and executive of the party, has claimed the four ministers will not abuse their authority during the campaign.

The party held its first general assembly on Saturday.

It chose Industry Minister Uttama Savanayana as party leader, Science and Technology Minister Suvit Maesincee as a deputy leader and Commerce Minister Sontirat Sontijirawong to be secretary-general along with Mr Kobsak.

The camp is widely believed to support Gen Prayut's return as prime minister after the poll, expected to take place on Feb 24 next year.

Former EC member Sodsri Sattayatham said the cabinet positions afford the four ministers the opportunity to act improperly in their own interests.

"Although they are not legally required to step down, it is political etiquette that they should resign from ministerial posts when deciding to step into politics," said Ms Sodsri.

She said the mobile cabinet meetings could be seen as a form of canvassing for votes while other parties have not yet been granted permission to campaign at all.

Key Pheu Thai figure Noppadon Pattama said the four hold government positions in which they have the power to transfer officials, consider budgets and capitalise on government resources.

"It has to be accepted that this government is the result of a coup and it would be politically graceful for those who lead the party to resign from their posts," he said, but conceded there are no laws that require them to do so.

Mr Noppadon stressed it would be good if Gen Prayut would elaborate on his political future, although he believed the premier is unlikely to announce anything soon for fear of facing a backlash.

Former Pheu Thai MP for Samut Prakan Worachai Hema said that now the Palang Pracharath Party has been unveiled, Gen Prayut should come out and lead the party by himself.

"He should not hide behind the scenes any more," said Mr Worachai.

Former Pheu Thai deputy secretary-general Chavalit Wichayasut said it is ridiculous that Gen Prayut can hold on to the premiership position, and consequently his Section 44 powers, all the way up until a new government is established, especially given that Palang Pracharath has made it clear it will support his return as the premier after the poll.

"Gen Prayut has a conflict of interest in the prime minister's position and this goes against political ethics," he said, adding: "This is not justifiable at all".

Mr Chavalit said he has given up hope of fair play from this administration but can help the pro-democracy camp achieve a landslide victory in the election.

Pheu Thai bigwig Chaturon Chaisang stressed that now the ministers have announced they will run the party, they must refrain from disbursing money in ways that might seem as though they are attempting to gain political support, as well as stop approving long-term projects and stall transfers of officials.

Mr Chaturon also called on Gen Prayut to stop using the Section 44 power as that too could have an impact on the election. 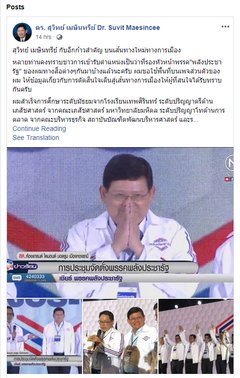 Particularly defiant of the calls to resign was Mr Suvit. He posted a lengthy political article on his Facebook page (right) on Sunday, complete with a collection of blatantly political photos from the PPP convention on Saturday.

He wrote that he intends to make the Palang Pracharath Party an attractive option for all voters regardless of previous political affiliations.

He said he decided to join the party so he would have a chance to pursue policies he has already laid the foundations of as part of the current regime.

"National development cannot be finished in a short period of time. It needs time and joint efforts by the government and people," said Mr Suvit.

"People must dare to change. As the world is changing, Thailand must adjust to it."

Responding to the calls for the four ministers to step down, Mr Kobsak reiterated Mr Uttama's statement given earlier that "when the time is right, we will wear only one hat, which is that of the Palang Pracharath Party".

The acting party spokesman also brushed aside concerns that the four ministers might be tempted to take advantage of their current office.

"On this issue, I am confident we will make behave in a transparent and accountable manner," Mr Kobsak stressed.

Mr Uttama and Mr Sontirat could not be reached for comment Sunday.