The Future Forward Party says it will kick off its campaign to amend the 2017 constitution on Feb 25, the day after the planned general election.

The party, one of the eight new entrants endorsed so far by the Election Commission, started recruiting members on Saturday at the Thai Summit Tower on New Phetchaburi Road in Bangkok.

It also began sales of souvenirs, ranging from T-shirts, shopping bags and caps to mobile accessories, all bearing the party’s logo, to raise funds as allowed under the Political Parties law.

Among the well-known people applying to be members was Charnvit Kasetsiri, a former Thammasat University dean, and a number of ex-politicians.

Party leader Thanathorn Juangroongrungakij said he was glad to see so many people showing up to support his party.

The former auto-parts tycoon reiterated that Future Forward would field candidates in all 350 constituencies. “We aim to be a national party. Without enough MP candidates, we won’t be able to achieve our goals.”

The party, he added, would focus on both party-list and constituency votes. “Some believe we will win only party-list MPs but our own estimates show our candidates have potential in several constituencies.”

As a new player, Future Forward is viewed by some as benefiting from the new mixed-member apportionment system to be used in the coming election, as it counts all votes for all parties regardless of who wins in a constituency. (continued below) 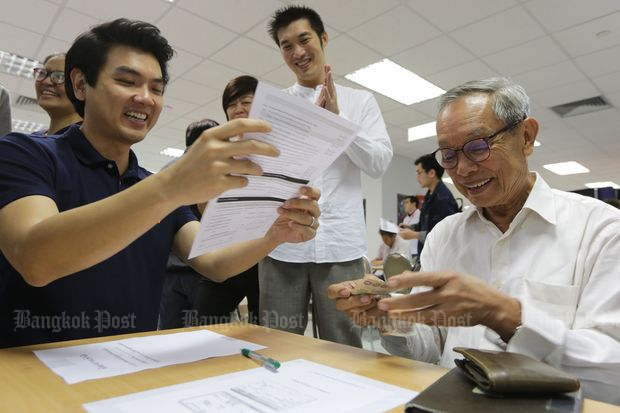 Mr Thanathorn declined to say how many MPs his party hopes for.

“It’s too soon to tell. We’ve gone to the provinces to disseminate our ideology and campaign for votes. We’ve done everything by the book.

“We pledge to comply with the rules whatever they are. We’d like a clean win in the NCPO’s game to avoid any problems in the future,” he said, referring to the National Council for Peace and Order.

Future Forward has set up branches in six provinces: Chiang Mai for the North, Khon Kaen for the Northeast, Rayong for the East, Ayutthaya for the central region, Nakhon Si Thammarat for the South and Narathiwat for the three southernmost provinces, he said.

The law requires a party to have branches in at least four regions.

In mid-October, party leaders will go to the six provinces to recruit members and raise funds. One of its goals is for the party to be self-sustaining, without the need to rely on funds from wealthy patrons. This alone would set it apart from many parties.

“Our vision of Thailand2x -- equality and modernity -- is our compass and all our policies will be based on these two core concepts,” said Mr Thanathorn.

“I’ve never said anything about joining the government. I’d like to stress here that ideology and votes are the same thing. We don’t want only power. Our three goals are to stop the power succession by the NCPO, to rewrite the constitution and to eliminate the legacy of coup makers.

“In order to do so, I must be the prime minister. But we don’t dream of having power for power’s sake. We need power so we can use it to change society. Being prime minister is not a goal. It’s a means.”

Starting on Feb 25 next year, a day after the general election if the current timetable isn’t changed, Future Forward will start a campaign to change the constitution, which requires a third of the 250 appointed senators to approve.

After the cabinet is sworn in, the NCPO will be dissolved. “If millions of people rise, the pressure can force the senators to side with people and vote for the amendment,” the Future Forward leader said.

“Votes are not enough for change. Instilling ideology must be done hand-in-hand with campaigning for votes,” he added. (continued below) 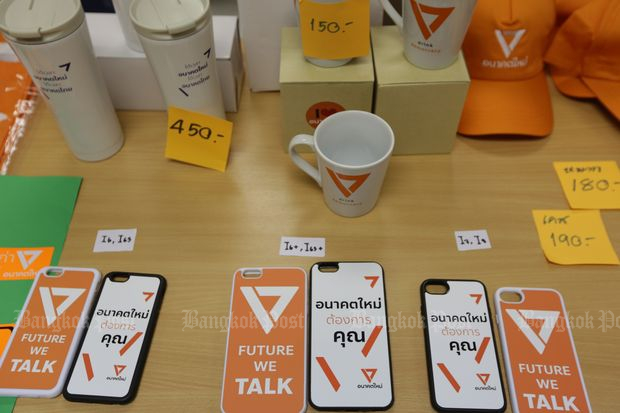 Some of the souvenirs sold at Saturday’s event to raise funds.

“Given the 86 years of democracy in the country, I know my work won’t be finished anytime soon. Future Forward is here for the long haul. We may fail this time but we’ll continue our work. Those who don’t work in Parliament will work continually outside to propagate the ideology and democratic values.”

Aware that action is louder than words, Future Forward will disclose its accounts for public scrutiny every quarter and the first disclosure, for the fourth quarter of this year, will be made in the latter half of January.

Asked about the four ministers who joined the pro-regime Palang Pracharath Party without resigning from the cabinet, Mr Thanthorn said the Prayut Chan-o-cha government used lack of governance and unrest as a pretext to stage its 2014 coup, but now it had become clear that there is no good governance in this government.

“When a government that preaches about these values every day does not set an example, I won’t interfere. But politicians must set an example for society. They must set standards for Thai society,” he said.

Somkiat Santakorn, 58, a vendor who travelled from Chumphon with his family to register as members of the party, said he liked its policy ideas and had faith in the democratic stance of the party.

“What I want Future Forward to do quickly is [work on] the economy. People haven’t had more money in their pockets over the past few years. Next, I want to see changes in the laws and constitution for equality of rights.”

Passakorn Suttadham, 36, a company employee, said he signed up because the party’s ideology matched his. “Its stance is clear. It doesn’t try to play both ways. I wholeheartedly agree with the three goals or coups will keep happening.”

He would like to see changes in the constitution because it aimed to block certain groups and take advantage politically, citing appointed senators.

He also likes the idea of increasing opportunities and equality. “For example, beer can only be produced in large quantities, which limits the possibility only to a handful of wealthy groups. I also like to see hyperloop in Thailand. It should bode well for transport.”

Member registration can also be done online for people residing in Thailand at the party's website starting on Sunday. The fees are 100 baht for one year and 2,000 baht for life. 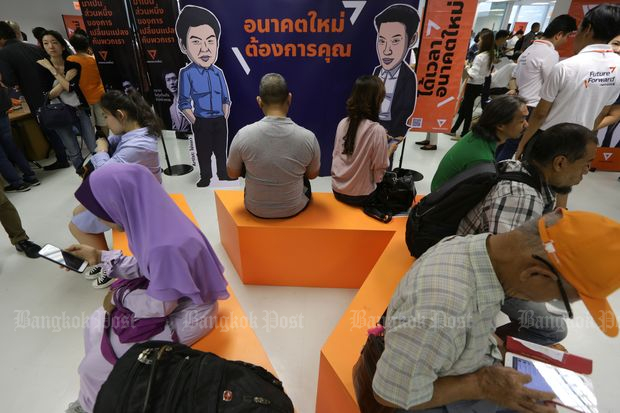 IP shield for medicines in the works

The Intellectual Property Department has teamed up with the Thai Traditional and Alternative Medicine Department under the Public Health Ministry to develop a central database for Thai traditional medicine recipes and Thai traditional wisdom to prevent profiteering and patent or trademark registrations by foreigners.