Just months after the National Council for Peace and Order (NCPO) eased the political ban allowing parties to recruit new members and select candidates, parties have now begun to float ideas about how to attract the support of first-time voters.

Several parties are recruiting younger faces in a bid to appeal to a generation set to visit the polling booth for the first time next year.

The number of first-time and young voters in the upcoming election scheduled to take place on Feb 24 could be significant, as people between the ages of 18 to 25 account for over 10% of eligible voters.

The Department of Provincial Administration says there were about seven million Thai citizens in this age group in 2017. The Election Commission, meanwhile, has estimated the total number of eligible voters will be around the 50 million mark.

Although the sight of a ballot box may be a distant-but-familiar memory to most, Thais will finally be able to cast their votes after a spell of more than four years without a poll, amid so-called peace and harmony following the coup staged on May 22, 2014.

For some, this will be the first time they have been able to affect change. The Bangkok Post asked a number of young Thais what the election means to them and whether they thought their generation could help steer the nation towards a brighter future. 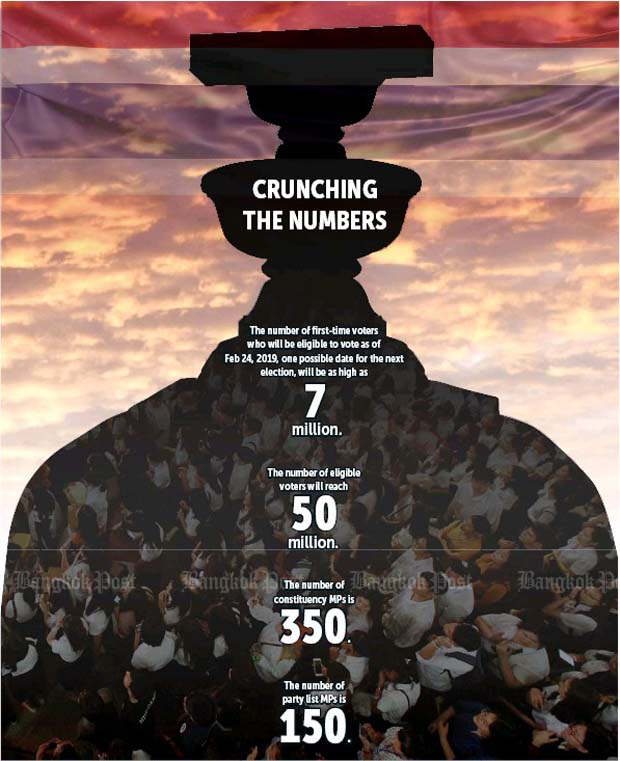 Source: The Department of Provincial Administration and the Election Commission

As large parties scramble to get at least half of the 500 seats available, this group will be crucial to the power of a party -- or any supposed alliances among parties -- in the next parliament, says Prajak Kongkirati, a political scientist and lecturer at Thammasat University.

"I have never believed the younger generation isn't interested in politics. The more you prevent those in this age group from doing something, the more they will want to do it," he told the Bangkok Post.

"Many may think the coup has made the younger generation indifferent to politics because of all the political restrictions.

"The roads may be quiet at night, but heated political debate has simply shifted from public protests to cyber-activism online," he added.

Mr Prajak said this election's first-time and young voters will comprise university students and those who have just started working.

According to Mr Prajak, the most well-known parties -- namely the Democrats, Pheu Thai and Bhumjaithai parties -- do not normally court first-time voters, since they already have strong support bases nationwide. 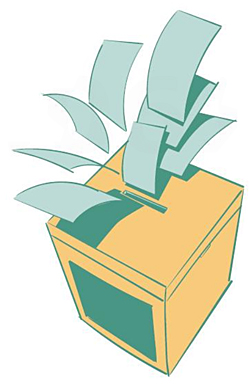 However, he says that "every vote will actually count this time", and this can be credited to a new electoral system set to be used in the upcoming poll.

The voting system was introduced as one of the political reform policies under the NCPO, through its constitution-drafting committee headed by legal eagle Meechai Ruchupan.

It involves the use of only one ballot for a constituency MP and his or her corresponding party.

The previous system, used most recently in 2011, comprised two ballots, one for an MP from the voter's constituency, and the other for a party of the voter's choice.

The new, single-ballot system is said to encourage diversity in parliament because it incorporates every vote cast to elect constituency and party-list MPs instead of focusing on the winning candidates and disregarding the votes of those who come second, third, fourth and so on.

Mr Prajak said this will benefit medium-sized parties but cause problems for both well-established and new parties.

"This is where first-time voters will be valuable to parties," he said.

"These young people have the power to deeply influence their friends during the formative stages of their ideological development, and a little goes a long way through word-of-mouth.

"All it takes is for a student to join as a staff member at a political party event and tell their friends about their experience," he added.

He also said this age group will be crucial to the strength of parties in future elections, given that they will act as the main pillars of the workforce as they age.

"These people will be the ones taking care of us when we retire," Mr Prajak said, citing the well-documented issues of Thailand's ageing population.

"The pressure to find good jobs with high salaries to take care of their loved ones is all on them, so they will surely be interested in who runs the country,'' Mr Prajak said.

However, the political scientist criticised the government and its Election Commission (EC) for not clearly explaining the new electoral system and for failing to encourage people to vote.

According to him, most of his students do not know about this new system.

Mr Prajak encouraged the government and EC to come up with more pro-election campaigns in the few months it has before the vote, "if they really want to elicit any kind of change in the country."

With a pocketful of hope, a young generation of voters are eager to cast their ballot, feeling that this is their chance to change the political landscape of Thailand and determine their country's future.

Nattapon Srichan, a 22-year-old geography major student from Chulalongkorn University's Faculty of Arts, said he and his friends are up to the task.

Although he believes everybody deserves to have their voices heard, he thinks the young may have trouble being heard as politics in the country is still very much a realm dominated by older voices.

Therefore, the power of the young is still relatively low compared to other groups, he believes.

Still, Mr Nattapon said he has faith in democracy and is eagerly awaiting the chance to cast his first-ever vote.

"I want to know what an election, assuming it's fair and transparent, can yield,'' he said.

Discussing the prospect of another coup which could undermine the result, he said that due to the power of digital media he is no longer afraid of this scenario as he believes his generation is now more sophisticated at using modern methods of communication to prevent further discord in society than they were in 2014.

However, what concerns him most is the challenge of debunking so-called "fake news" before it has a chance to influence those without the means to check its authenticity, most likely those from the older generation in rural areas.

Mr Nattapon says he believes that democracy is the only way to develop a new cycle of peace and prosperity.

"We have to accept that elections are a political game, and if we are not satisfied by the result we still have to accept it because the majority will have decided. It's only four years, after all, until we can choose a new party to take over if we don't like the results,'' he said.

Mr Nattapon thinks that one reason for the historical political friction in Thai society is that not everybody's voice was heard.

Coming from the Northeast region, he feels that those from provincial areas are not as respected as people from Bangkok or who have "more well-to-do backgrounds".

"The voices of everybody, regardless of their socioeconomic status, should all be better reflected in the political landscape otherwise there will only be more conflict.

"Some people feel powerless. Everyone should all be encouraged to speak their mind and express how they feel. That will improve the political atmosphere,'' he said.

Phakanon Aonlamun, 22, a fourth-year student from the of Faculty of Education, Chulalongkorn University, said he has been waiting a long time for this election to finally happen.

"I am excited because it's the first time in my life that I will get a chance to choose representatives to run the country.

"I want the opportunity to choose the most capable people to develop the country and move it forward. I want the country to rid itself of all the old problems and make a fresh start," he said.

However, he is still not sure whether he and his peers will have the chance to cast their votes due to the date having already been repeatedly changed.

The latest tentative date of Feb 24 also clashes with the date of the National Test (GAT/PAT), which makes him believe it may be pushed back until later in the year.

Yet while many first-time voters are eagerly awaiting there first trip to the polling booth, many second-time voters have already become jaded and hold out little hope that this time will be any different and real change will be brought about.

Chairaweepat Teerapanuchaikul, 24, who has cast her vote once, seven years ago, said she feels that it's about time for an election. However, she said that her faith in elections and politics has plummeted in recent years.

"I don't particularly believe in elections in Thailand because people are still attached to individuals rather than the policies of each party. Therefore, the parties that win don't usually bring about the development the country really needs,'' she said.

However, she still wants the chance to cast the ballot because at least she can choose a new party that might run the country more effectively.

"I want to change the prime minister,'' Ms Chairaweepat said, saying she is unhappy with the government's performance.

Businessman Panithi Chaiwattanachai, 24, said he fears the regime is doing all it can to give itself an advantage should it seek to retain power after the election.

However, he still believes that the election will push the country forward.

"Although the election may not directly solve many problems we are now facing, at least Thai people will get the chance to exercise their right [to vote],'' he said.

Still, Mr Panithi said it remains to be seen whether the election will truly be free and fair.

To date, Thailand has gone through 13 military coups since it became a constitutional monarchy in 1932.

It has held 27 elections so far, although two, in 2006 and 2014, were declared invalid due to political turmoil.