A secret vote was held during the assembly on Sunday to elect the 15-member executive committee. The vote results were announced at about 2pm.

The names of the new executive committee will be forwarded to the Election Commission for approval before taking effect. 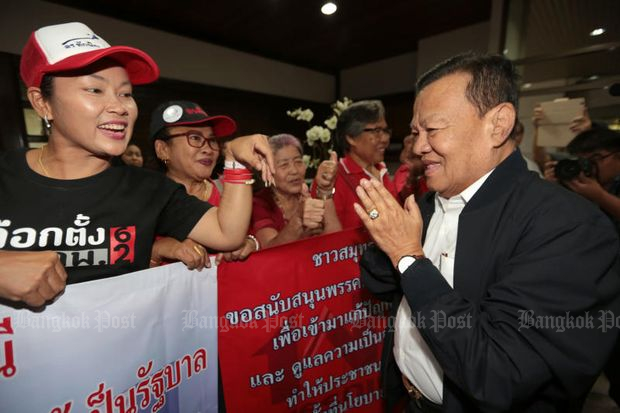 Khunying Sudarat was additionally named chairwoman of the party's strategic committee to formulate party policies. In this position, she is said to be entitled to be listed as one of the party's three candidates for the post of prime minister.

What I have to do now is to gather all the capable people in the party and bring out their best to work for the people," Khunying Sudarat told reporters at the assembly.

"We will now go and talk to the people and consult them to formulate our party's policies," she added.

Newly elected party executives said it was too soon for the party to nominate its candidate to contest for prime minister and instead will focus on working out the party's policies first.

Mr Phumtham said that in recent years, the country has faced many problems while Pheu Thai has been subjected to various forms of intimidation.

Without being specific, he said Pheu Thai has been targeted for destruction by numerous people and groups, but the party has been saved by the people.