Calls for probe into document leaked

The Election Commission's (EC) announcement of an electoral boundary redrawing has divided opinions of politicians with some viewing it is as providing an unfair head-start to a pro-regime party contesting the next poll.

However, several parties believed the redrawing of the constituency lines was generally acceptable.

The EC's announcement of new electoral boundaries in 350 constituencies was published in the Royal Gazette on Thursday. (See map below)

The announcement came after an unverified copy of it was leaked in politicians' chat rooms and went viral on Wednesday. Earlier, gerrymandering fears spread after the regime issued an order giving the EC more time and immunity in redrawing the electoral map.

Somkid Chuakhong, a Pheu Thai member and former MP for Ubon Ratchathani, said constituencies in some provinces were redrawn to fit with the wishes of those in power.

He said the EC was wrong not to announce the new electoral map sooner.

Problems arose when the National Council for Peace and Order (NCPO) issued the order to extend the announcement, he said.

Mr Somkid said the order was meant to give a certain party, understood to be the Palang Pracharath Party (PPRP), an unfair advantage while the EC's image and neutrality was also damaged as a result.

The EC must rebuild its image as an organisation that is not overshadowed by the NCPO, he said.

The PPRP has made it clear it will support Prime Minister Prayut Chan-o-cha in any bid to reclaim the premiership after the poll. "What the EC needs to do now is restore its reputation by supervising the upcoming election straightforwardly, and not favour anyone. The EC must ensure that it is not under the shadow of the NCPO," Mr Somkid said.

It does not matter how constituencies are redesignated because Bhumjaithai focuses its priorities to formulating and presenting policies, he said.

Tewan Liptapanlop, leader of the Chart Pattana Party, said changes had been made to a number of constituencies not based on the models announced earlier by the EC, possibly due to complaints. Constituencies in Nakhon Ratchasima, the party's stronghold, were changed.

"But if the EC performs its duty and we are confident it's impartial, we must accept them," he said.

Nikorn Chamnong, director of the Chart Thai Pattana Party, said he appreciated the EC announcing the new constituencies earlier than expected following the NCPO order. However, the party will still have to examine whether the redraw will affect its poll candidates, Mr Nikorn said.

Tawee Suraritthikul, a political scientist at Sukhothai Thammathirat University, said the divisions of electoral boundaries will result in both political advantages and disadvantages in an election.

"Those who know best are former MPs. Let's wait and see in the next few days if anyone will step forward and complain or if anyone will resign from the PPRP because they do not get what they want," Mr Tawee said.

On Nov 16, the NCPO invoked Section 44 to issue an order that gives the EC more time to address complaints from parties and voters, saying the earlier drawing of constituencies failed to take public input into account.

The NCPO's order No.16/2018 permits the EC to make changes to boundaries until Dec 11 when the bill on the election of MPs takes effect, which is much later than earlier expected. Some politicians and critics fear it may be an attempt by the regime to interfere with the poll preparation process.

Also on Thursday, former election commissioner Somchai Srisutthiyakorn, a new member of the Democrat Party, posted on Facebook, calling on the EC to explain why the EC's electoral map was leaked prior to its announcement.

Mr Somchai said the document was leaked despite it having not yet being signed by EC chairman Ittiporn Boonpracong. The EC must launch an internal probe to find out who leaked such an important document, Mr Somchai said.

Parties which know details in advance such as the constituency redraw will have an edge over other parties in the upcoming election tentatively scheduled for Feb 24, he added. 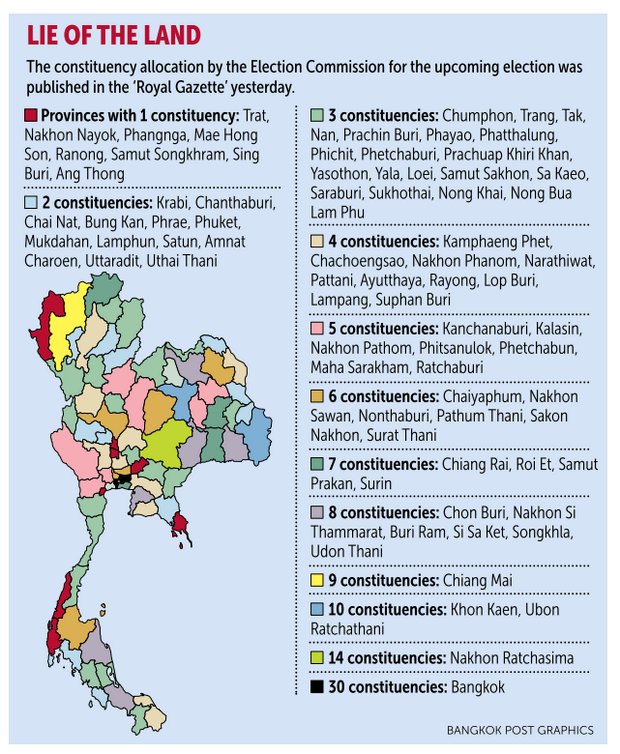 The Department of Industry Promotion (DIP) expects to generate 1.2 billion baht in economic value for Thailand with its plan to help entrepreneurs modernise their businesses through industrial cluster development.