This billboard in Bang Phae district of Ratchaburi province appears to break the regime's law banning all election advertising. (FB/arthit.ourairat.9)

A giant billboard next to the main highway in Ratchaburi province is the target of complaints that supporters of Prime Minister Prayut Chan-o-cha are breaking the laws on election campaigning.

Activist Veera Somkwamkid said he will take proof of the billboard to the Election Commission and file a formal complaint on Thursday.

In a savage post on his Facebook site (screen capture below), Mr Veera directly linked the billboard to Gen Prayut's professed "zero tolerance" for corruption.

He called the billboard "campaigning without fear".

The billboard openly supports Gen Prayut to stay on as prime minister following elections which could take place next year.

The billboard was first spotted by Rangsit University president Arthit Ourairat, an ex-politician. He posted the photo above to his Facebook account on Wednesday.

Chaturon Chaisang, a leading opposition politician and core member of the Thai Raksa Chart Party, said the billboard was an obvious violation of the election laws.

The origin of the billboard was unclear. It appears to be an obvious violation of the order by Gen Prayut's National Council for Peace and Order (NCPO) that forbids all electioneering.

The prime minister has called a meeting of all political parties for Friday at the Army Club, site of his May 22, 2014, coup d'etat.

Democrat Party leader Abhisit Vejjajiva said his party won't be joining the NCPO-organised meeting on Friday, as the NCPO said the meeting is on how the poll would be carried out.

"This is not a stage where opinions on the election are being sought," he said.

Also on Wednesday, Pheu Thai Party core member and likely prime minister candidate Khunying Sudarat Keyuraphan stopped just short of demanding that Gen Prayut step down from the government if he decides to become a candidate in any election that might take place.

She said the decision on whether to resign from the government rests with Gen Prayut's conscience.

"This is hard to say. It is a matter of individual conscience. I cannot speak on behalf of others," said Khunying Sudarat.

She was reacting to a statement by the Palang Pracharath Party (PPRP) that expressed interest in nominating Gen Prayut as the party's prime ministerial candidate. The premier has hinted that he would support parties with policies that are in line with his administration's, if he decides to enter the political fray.

The PPRP is widely seen as a vehicle created solely to make it possible for Gen Prayut to try to extend his political power after elections.

The head of Pheu Thai's strategic panel said the government is pouring money into the Pracharat scheme, which bears the same name as the party that is expected to nominate Gen Prayut as its prime ministerial candidate. 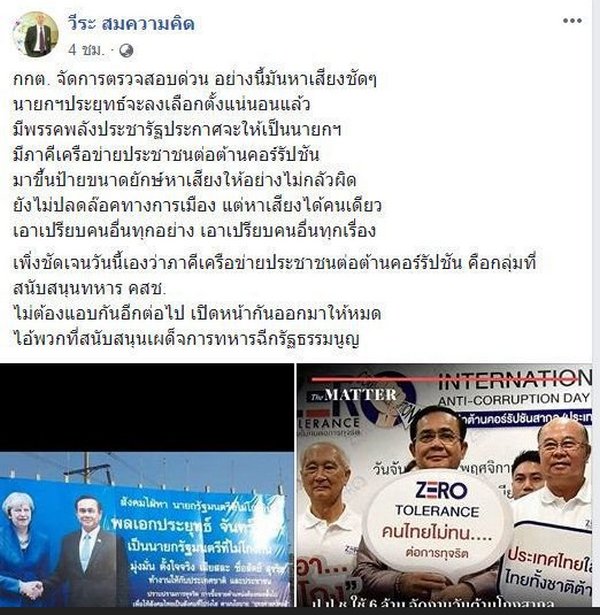 At Friday's scheduled Army Club meeting, Gen Prayut's NCPO plans to invite the Election Commission (EC), political parties and other related organisations. The meeting is likely to include a discussion to lift the ban on political activities ahead of the election, which could take place on Feb 24.

Khunying Sudarat said her party is always present at election-related meetings organised by the EC, but said she was surprised to see the NCPO stepping in to handle the poll itself.

According to her, the election would only be free and fair if the EC is allowed to proceed with its work independently, without the influence of the NCPO.

Currently, Industry Minister Uttama Savanayana is serving as the PPRP's leader, with Science and Technology Minister Suvit Maesincee as its deputy leader.

The four ministers have faced mounting pressure to step down since forming the PPRP. However, Deputy Prime Minister Wissanu Krea-ngam and former EC president Supachai Somcharoen have said the ministers are not obliged to resign from their posts after joining the party.

Chousak Sirinil, the head of Pheu Thai's legal advisory team, said that although this is not legally required, it is a matter of ethics.

The setting up of a party with the same name as a government policy, and the possible nomination of the NCPO chief as a prime ministerial candidate indicate conflict of interest, he said.