The Democrat Party says it is doubtful that Prime Minister Prayut Cha-o-cha can turn the country around if he makes a successful comeback as premier after the general election, as his regime's efforts to tackle key issues such as economic stagnation and corruption have fallen short.

Questions surrounding Gen Prayut's capacity to lead began to surface, following his recent remark on his status as a politician -- which is widely seen as a hint that the regime leader is ready to enter the political fray as the general election approaches.

Prior to his remark, the pro-regime Palang Pracharath Party (PPRP) had expressed an interest in nominating Gen Prayut as its prime ministerial candidate.

A spokesman for the Democrat Party, Thana Chirawinit, said that the public would like to know Gen Prayut's strategy to advance the country, should he decide to be premier again. 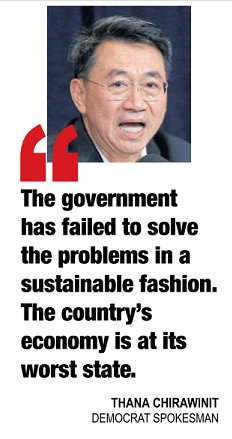 "Despite the fact that the Prayut administration has been in power for more than four years, it has failed to address corruption, the economic slowdown, and promote good governance," he said.

When the public demanded a probe into the scandal, the prime minister called on the media not to make too much of a fuss about Gen Prawit's wealth, Mr Thana said.

The prime minister also bowed to pressure from members of university councils who threatened to resign en masse, by backtracking on the new asset declaration regulation, he noted, before saying that the regime's decision reflects the government's complacency in stamping out graft and corruption.

The spokesman said the fact that Gen Prayut's cabinet members refused to step down from their posts upon joining the PPRP indicates bad governance on the part of the regime.

He also said that most of the regime's economic stimulus packages are not sustainable as they were intended simply to woo votes, before criticising the regime's mobile cabinet meetings as an excuse to get a head start in vote canvassing.

Mr Thana also said that the tumbling prices of several key crops and increasing household debts are clear indications that the government's efforts to solve its economic problems have failed.

"The government has failed to solve the problems in a sustainable fashion. The country's economy is at its worst state," he said.

According to Mr Thana, the government has accrued overwhelming powers over the years but it has still failed to turn things around.

"This leaves the question of whether Gen Prayut can make a difference when he enters politics," he said.

Government spokesman Buddhipongse Punnakanta said the government would rather focus on its work rather than countering politicians' criticisms.

"As Thailand enters election mode, political parties have come out to attack the government and say how their policies are better," he said.

"The government would rather focus on its work and on real issues that have an impact on the people's well-being and society."