The future of Thai Raksa Chart is now in the hands of the Constitutional Court after the Election Commission recommended that it dissolve the party on Wednesday. (Post Today photo)

The Election Commission (EC) on Wednesday decided to recommend that the Constitutional Court dissolve the Thai Raksa Chart Party (TRC) for nominating Princess Ubolratana to be its prime ministerial candidate. 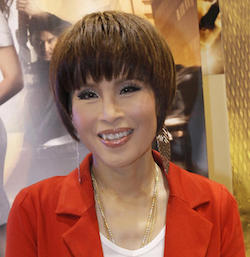 Princess Ubolratana poses for a photo during her visit to promote Thailand's film industry at the Entertainment Expo Hong Kong Filmart on March 24, 2010. (AP photo)

"The act is deemed hostile to the constitutional monarchy," he said.

Section 92 states that after obtaining credible evidence that a party has committed an act deemed hostile to the constitutional monarchy, the EC must propose the dissolution of the party to the Constitutional Court.

EC chairman Ittiporn Boonpracong, who acts as the registrar, forwarded the case to the court as soon as the decision was made.

The court said it will decide tomorrow whether to accept the case.

'It’s likely that the court will dissolve the party after this recommendation,' said Paul Chambers, a lecturer at Naresuan University’s College of Asean Community Studies in northern Thailand.

'We’ll be asking the court to exercise our rights under the constitution,' Preechaphol Pongpanit, TRC party leader, told reporters. 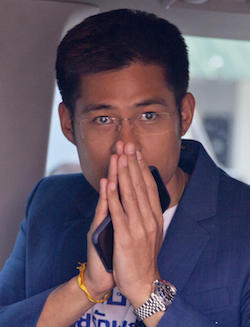 'We still don’t have the details of the allegations or what’s being submitted to the court. What we did started with good intentions, not bad intentions. I still stand by our position that we’re innocent.'

The EC move followed TRC's registration of the princess to be its candidate for prime minister on Friday morning. His Majesty the King issued a royal command on Friday night stating members of the royal family should not be drawn into politics (see unofficial translation).

The princess was disqualified from running for PM on Monday.

The party on Wednesday tried in vain to ask the EC to give it a chance to defend its actions before the poll organising office made a decision.

Thai Raksa Chart is linked to exiled former premier Thaksin Shinawatra. Dissolving it could anger his supporters and boost junta leader Gen Prayut Chan-o-cha’s push to stay as prime minister after the general election due on March 24. The furore shows that political divisions are erupting again in Thailand ahead of a poll to end almost five years of military rule.

Foreign investors have sold a net 3 billion baht of Thai stocks since the political storm first broke last week, while the baht has weakened about 0.1% against the dollar.

Thaksin or his allies have won every election since 2001, only to be unseated by the courts or the military. Thai Raksa Chart and Pheu Thai are among the parties linked to the former premier. Regulators have suspended a television channel linked to him for 15 days.

The dissolution of Thai Raksa Chart would leave the election strategy of Pheu Thai and other Thaksin-aligned parties in tatters.

Thai Raksa Chart was planning to field 108 party-list candidates and run in 175 constituencies. Pheu Thai has apparently chosen not to field candidates in many of these constituencies to boost the chances of its perceived spinoff parties, including TRC -- a strategic move that may now be seen as disastrous to its overall objective of preventing the continuation of military-backed rule.

Princess Ubolratana on Tuesday night posted an Instagram message saying she was "sorry" for the problems that have arisen from her "sincere intention" to help the country.