The digital TV station is now airing normal programmes online via its website and social media, but has been banned from broadcasting on air.

The NBTC order was also denounced by the Southeast Asian Press Alliance (Seapa).

According to the Thai media associations, the NBTC's decision affects employees unrelated to the programmes in question. Any controversial programmes should be dealt with case-by-case, they said, adding the NBTC went too far in suspending the station's broadcasting licence.

People who may have been defamed in TV programmes already have the right to sue in accordance with the law, according to the media corps. They also said the order conflicts with the constitution and deprives the media and people of rights and liberties, particularly during political campaigning ahead of the election.

The group called on the media to act cautiously in reporting political news to ward off criticism they are acting in favour of any particular political parties. Additionally, they need to avoid any reporting or rhetoric that could spur divisions, according to the group. 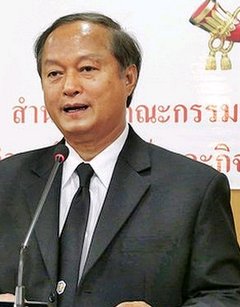 Meanwhile, Seapa said: "Such perceived risk is unwarranted and could only be construed as yet another unmistakable curtailment of press freedom by the ruling junta."

Saying the broadcaster had aired content causing confusion and inciting divisions, the NBTC board on Tuesday suspended the operating licence of Voice TV, which belongs to the Shinawatra family, effective on Tuesday, said Lt Gen Perapong Manakit, a member of the NBTC subcommittee governing TV content and programming.

The NBTC said it had acted on 34 rule breaches committed by the TV station since 2015 and had issued several warnings and suspensions during that time. Critics say it has acted too close to the election.

Voice TV chief executive officer Makin Petplai said the TV station will lodge a case with the Central Administrative Court to seek a temporary injunction against the order and it is prepared to sue the NBTC for more than 100 million baht in damages.