Defence insists it is a lean outfit
Thailand
Politics

Defence insists it is a lean outfit

Battle of the songs as activists, cops meet

The Defence Ministry has leapt to the defence of its spending, producing budget figures yesterday as proof of its "transparency" amid a furore over a proposal for defence budget cuts put forward by the Pheu Thai Party as its campaign policy.

Meanwhile, small groups of critics and supporters of the military staged a peaceful 'battle of the songs'.

Earlier this week, army chief Gen Apirat Kongsompong responded to Pheu Thai's pledge to cut the defence budget and end conscription by recommending party chiefs listen to the song Nak Phandin -- a strident right-wing song associated with the massacre of students and activists on Oct 6, 1976.

This drew strong criticism, and demands for the army commander-in-chief to stay out of politics. 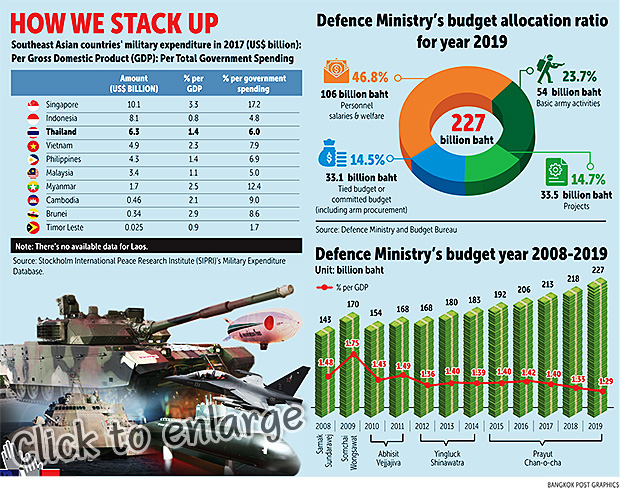 Lt Gen Kongcheep said some parties were spreading incorrect information about the military's spending. He said the armed forces experienced hardship during the economic crisis in 1997 when defence budgets were slashed to only 6.5% of the budget, compared to an average of 12.7% between 1993 and 1998.

As a result of the defence spending cut, there was not enough money for military training, fuel and maintenance of military equipment, he said.

Since the economic crisis, defence budgets have continued to increase by about 7% of the budget each year, Lt Gen Kongcheep said, adding there was nothing special about such increases.

He said the Defence Ministry's budget proposals followed normal procedures and were approved by parliament. They were transparent and there was nothing secretive going on, he said.

He said the ministry has spent its budgets in line with regulations while arms procurements are conducted on a government-to-government basis.

"If our house contains valuables, we will need fences and guards to protect those assets. Likewise, it is necessary to strengthen the armed forces to protect the country's interests. But there are still some people who ask why there should be fences," the spokesman said.

Chulalongkorn University political scientist Panitan Wattanayagorn told the Bangkok Post the issue involving the proposed budget cuts has been over-dramatised to pit pro- and anti-military groups against each other.

Mr Panitan, adviser to Deputy Prime Minister Prawit Wongsuwon, said army chief Gen Apirat spoke out in response to the proposed defence budget cuts because he intended to defend the interests of rank-and-file soldiers who would be affected by any spending cuts.

Mr Panitan said the ministry's budget was less than 1.6% of GDP and efforts were being made to slash the budget to 1%.

Writing on Facebook yesterday, deputy Democrat Party leader Korn Chatikavanij said that while defence budgets increase almost every year, this must be seen in relation to GDP. Budgets for other ministries also rise in proportion to higher GDP. After taking account of GDP, defence spending has continued to decline under the National Council for Peace and Order (NCPO), Mr Korn wrote.

Small groups from both sides gathered outside army headquarters yesterday, with activists and police also engaged in a brief song battle.

Among them, activist Prit Chiwarak called on army chief Gen Apirat to stop playing Nak Phandin on the army's many radio outlets and at army units. He said the lyrics accused political opponents of undermining society.

Another anti-regime activist, Ekachai Hongkangwan, played the anti-regime song Prathet Ku Mee (What My Country's Got).

Later a pro-military group from the Thon Buri area of Bangkok took its turn. Leading the group, Bancha Panwiwat said the military protected the country and supported the military.