PM 'must be neutral' in debates
Thailand
General

PM 'must be neutral' in debates

Prime Minister Prayut Chan-o-cha is the cover subject (inset) of a new 160-page book by Palang Pracharath Party (PPRP) detailing his achievements since the coup.

Deputy Prime Minister Wissanu Krea-ngam, however, remained insistent that it is important for Gen Prayut to maintain his neutrality.

EC chairman Ittiporn Boonpracong said Monday the commission had not yet received a letter from the PPRP seeking clarification over whether Gen Prayut can join policy debates as the party's prime ministerial candidate.

The EC will consider the issue if and when the letter reaches the commission, he said. The PPRP had earlier expressed its intent to seek clarification on the issue.

However, according to the EC's regulations on campaigning, leaders and members of parties, and prime ministerial candidates can join in policy debates organised by the commission, Mr Ittiporn said.

He also said the EC will consider whether Gen Prayut, as the chief of the National Council for Peace and Order (NCPO) is qualified as a candidate for prime minister under the law on the election of MPs and the constitution.

On Feb 15, Winyat Chatmontri, secretary-general of the United Lawyers for Rights and Liberty, asked the EC to disqualify Gen Prayut.

Mr Winyat cited Section 14 of the law on the election of MPs which stipulates that those who are nominated as prime ministerial candidates must meet certain qualification requirements.

Mr Winyat said that Gen Prayut, as a salaried state official, should, therefore, be barred from being a candidate under the constitution. 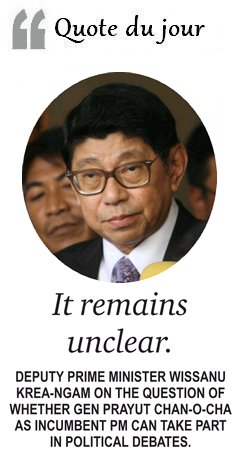 Deputy Prime Minister Wissanu that the PPRP had made the right decision to ask the EC for clarity about whether Gen Prayut can take part in policy debates.

Mr Wissanu said that state officials are required by law to maintain neutrality. If Gen Prayut takes part in policy debates and talks only about government policies, this means he must remain neutral.

"The [government's] policies may be similar to those of other parties, but it is important to avoid embracing other parties' policies," Mr Wissanu said.

"In light of this, it may be difficult for Gen Prayut to participate in debates, but other prime ministerial candidates from other parties will have no problems because they are not public office holders as Gen Prayut is.

"If Gen Prayut takes part in debates, then he has to maintain his neutrality. It will be okay if he can. But if he cannot, there will be a risk. If he discusses the policies of other parties, then he will be seen to be biased," he said.

"If he is careful with what he says, this will not breach the rule of impartiality on the part of state officials. But if not, this will be risky."

Gen Prayut can mention the term "Pracha Rath", which is the government's people-state partnership development programme, but there will be a danger if he mentions the term "Palang Pracharath", the name of the political party, Mr Wissanu said. 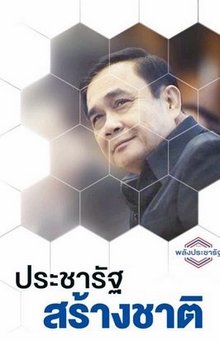 Asked if Gen Prayut, as the NCPO chief, is prohibited from being a prime ministerial candidate under Section 98 (15) of the constitution, Mr Wissanu said that Gen Prayut's role as head of the NCPO does not fall under prohibitions stipulated in that section.

"Those who receive state salaries are not necessarily state officials as defined by the section," Mr Wissanu said.

He added that the National Anti-Corruption Commission (NACC) ruled in 2014 that members of the NCPO are not required to submit declarations of their assets and liabilities to the NACC because they are not state officials and the NCPO is only a temporary organisation.

"The people will benefit from the opinions expressed during such debates," Khunying Sudarat said.

She also said that the PPRP's election candidates who are part of the current cabinet can publicise the government's policies, but they must not spend the government's budget in a way that canvasses for votes through government projects.

Mr Abhisit stated that politicians who use a one-way method of communication to address the people do not give themselves an opportunity to take on board feedback or answer questions from the public, he said.