Lt Gen Phongsakon Rotchomphu, a deputy leader of the Future Forward Party (FFP), has been summoned to meet police investigators over his role in sharing fake news about Deputy Prime Minister Prawit Wongsuwon on Facebook.

"Lt Gen Phongsakon is one of six people we are calling in for questioning," Immigration Bureau chief Pol Lt Gen Surachate Hakparn said in his capacity as deputy director of Thailand's Action Task Force for Information Technology Crime Suppression (Tactics) on Monday.

They have been accused of violating the computer crime law for spreading a report accusing Gen Prawit of spending 12,000 baht of the Defence Ministry's budget on a cup of coffee.

Lt Gen Phong­sakon is the Future Forward Party's designated expert on military affairs, and would be the likely nominee for defence minister in a FFP government.

He confirmed he had received the summons requiring him to meet investigators next Monday. 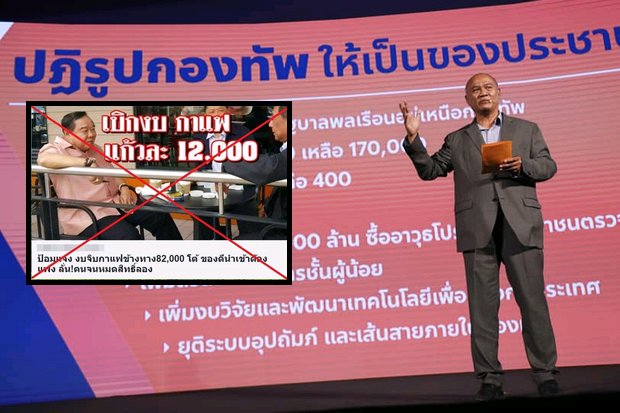 Lt Gen Phongsakon, seen campaigning for Future Forward, re-posted and then deleted a fake report on Gen Prawit's trip to Chatuchak market. He was summoned to a police interview next Monday.

He insisted he shared the news on Facebook in good faith, without paying too much attention to it as he trusted the news agency publishing it.

As soon as he became aware the news was not genuine, he deleted it from his Facebook timeline and posted a message saying he had not intended to spread false information, he said.

The police complaint was filed against him by the legal team of the National Council for Peace and Order.

"I'm not worried about this -- it's amusing to see more and more of these last-ditch attempts to win the [election]. I believe the pro-democracy camp will win in the end," he said.