A supporter waves a placard to show their support for the Palang Prachararth Party at the introduction of 30 MP candidates for Bangkok on Jan 30. (Photo by Wichan Charoenkiartpakun)

The Palang Pracharath Party has unveiled new key policies, including a minimum wage hike to 400-425 baht a day and personal income tax cuts, in the last stretch to the general election.

Most of the policies are reminiscent of the Pheu Thai Party’s pledges ahead of the 2011 poll, which were criticised as populist. The current military regime is running a high fiscal deficit of 450 billion baht, and plans to balance the budget within the next few years have been abandoned.

At a briefing in Bangkok on Thursday evening, the pro-regime party said that if it formed a government, it would increase the minimum wage to 400-425 baht a day. The basic wage was set at 300 baht a day nationwide by the Yingluck Shinawatra government in 2011 but after the 2014 military coup, it was changed to vary by seven groups of provinces. Rates now range between 308 and 330 baht a day.

As well, the party will cut the personal income tax rates by 10% in all brackets. Details remain sketchy at the moment and the income range for each bracket will have to be revised. But party leader Uttama Savanayana said earnings of less than 200,000 baht a year would be tax-exempt, up from the current tax-free threshold of 150,000 baht. The chart below shows the current personal income tax rates: 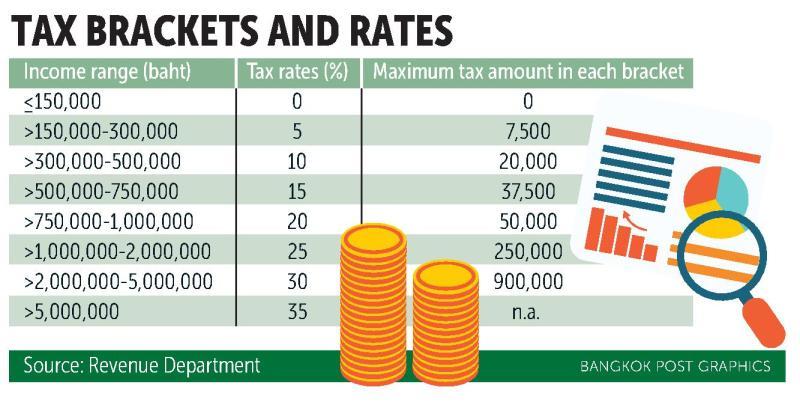 For new bachelor’s degree graduates, personal income tax will be waived for five years, Mr Uttama added. Online vendors would be exempted for two years while SME operators will have access to low-interest loans.

The former industry minister also said family shop owners would be able to compete through the use of technology and to increase their bargaining power with manufacturers. They will also receive a credit line of 1 million baht each to adjust to the new business environment.

The party also promised minimum prices for six crops but did not say how they would be funded.

"Thais shall be rich in peace, happiness and hope,” Mr Uttama declared.

The party says it can create sustainable growth by increasing national revenue to 19 trillion baht by 2022 while tourism revenue would be 4.5 trillion baht and the grassroots economy would be worth 2 trillion baht.

"All these will leave us with 1.24 trillion baht in additional funds a year to be used in other areas,” Mr Uttama said.

He stressed all of these policies have been carefully thought through. “We know how to raise money and we have done that.

“This is the overall picture of what our future looks like. Thailand must be rich through Pracha Rath power,” he said, referring to the government’s Pracha Rath policy which focuses on cooperation between the government and the private sector to help the needy.

“We respect constitutional rules and the Election Commission, the basics to peace. We won’t divide people," he said. "More importantly, we won’t pardon wrongdoers and would do everything to bring them to justice to maintain the credibility of the judicial process. ... This is how we will be rich in peace.”

Debt suspension will be allowed for village funds and more funds will be added.

“Our ‘Pracharath Mothers’ programme would also take care of children from womb to old age,” he said.

The policies, while appealing to some voters, have drawn criticism from other political parties and the business sector.

Mingkwan Sangsuwan, leader of the New Economics Party (Setthakij Mai) and a former deputy prime minister in the dissolved People Power Party-led government in 2008, warned of the consequences of the wage hike.

“If that happens, we’ll see a bowl of noodles costing 100 baht each because inflation will go through the roof. We might end up like Venezuela. Please don’t do it,” he wrote on Facebook.

Supant Mongkolsuthree, chairman of the Federation of Thai Industries, said a government or political party should not use the minimum wage hike as a campaign pledge as it is equivalent to pushing the burden on the private sector or using the private sector money to gain votes.

“They should instead aim to boost the economy. A good economy brings more revenue for companies and wage hikes would naturally follow, which would in turn bring in more tax revenue,” he said.

On the 20,000-baht minimum salary for new bachelor’s degree graduates, he said the compensation should be based on qualifications and skills. “The government should make sure new graduates have skills that meet the demand of the private sector. If they can work immediately without having to be trained first, the private sector is ready to pay more for them.”