Pulling away from the possible
Business

Pulling away from the possible

Candidates register for the March 24 election, and within days were right back on the hustings making promises the country can't keep. (Photo by Chanat Katanyu)

Populism is circling back in Thailand's political arena as campaign promises clog streets nationwide and candidates vie for popularity before voters head to the polls on March 24.

Populist policies are nothing new in Thailand, as the country's substantial wealth gap and social inequality create ripe conditions to pander to the masses.

The now-defunct Thai Rak Thai Party came to power in a landslide in 2001 by touting populist policies such as the 30-baht universal healthcare scheme, village microcredit and extended debt moratoriums for farmers.

On the other end of the political spectrum, the Democrat Party adopted populism while leading a coalition government in 2008, as seen by price guarantees for farm crops, free service on third-class buses and trains, and subsidised diesel, household electricity and LPG cooking gas. 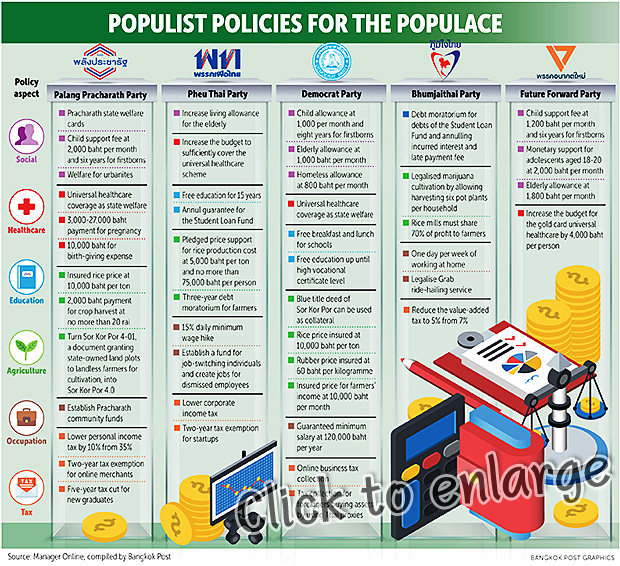 Fast forward to 2019 and the Pheu Thai Party (the third incarnation of Thai Rak Thai) and the Democrat Party are still wielding populism to gather votes, while the pro-junta Palang Pracharath Party has adopted a similar strategy to charm the masses.

While populism may be music to the ears of many, spending to cover populist policies may result in government coffers running untenable deficits -- a potential recipe for disaster.

No matter which political party prevails, the next administration needs to be cautious because global economic conditions are on the cusp of a slowdown, said Arnond Sakworawich, an associate professor at the Graduate School of Applied Statistics at the National Institute of Development Administration (Nida).

Campaigns hinging on populist policies are accompanied with debt obligations, which raise the question of how the next government can fund these policies given lower public revenue streams in the future, he said.

"[Before] devising policies that have massive budget commitments, the first thing each political party should do is use actuarial science to forecast the budget obligations of each policy every year," Assoc Prof Arnond said. "These estimates have to be assessed based on the population involved with a specific policy on an annual basis. This would evaluate whether the country has sufficient budget to implement a policy, and the source of revenue has to be identified." 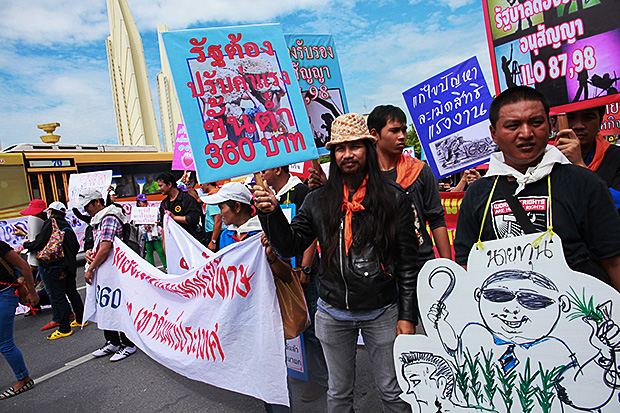 Labour activists march from Democracy Monument to Government House for anincrease in the minimum wage. (Photo by Panupong Changchai)

For instance, the Democrat Party's policy to provide a child allowance of 1,000 baht per month for firstborns until eight years of age would incur a cost of 96,000 baht per firstborn, according to Nida.

"I believe that no matter which political party is the new government, there is not sufficient budget to implement campaign populist policies during an economic slowdown," Assoc Prof Arnond said.

Campaign policies are not expected to see the light of day, the source said, because an anticipated coalition government will have to compromise and choose between campaign promises.

Apart from an obligation to ensure financing sources, any future minister delivering a policy will be fiscally and criminally liable for any policy errors, Mr Suchart said. 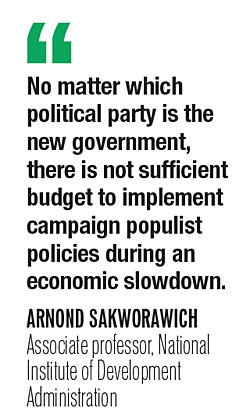 "This will make future politicians more sensible, despite all their campaigning, when it comes to policy execution," he said.

The State Financial and Fiscal Disciplines Act of 2018, publicised in the Royal Gazette in April 2018, is meant to prevent future governments from getting carried away with populist policies, requiring that cabinet members strictly comply with financial and fiscal discipline and veer away from conduct that would create unwieldy public finance burdens.

The new law requires setting up a committee on state fiscal and finance policies, whose members include the prime minister, finance minister, permanent secretary of finance, secretary-general of the National Economic and Social Development Board, Budget Bureau director and Bank of Thailand governor.

According to the law, all public expenditure must not push public debt above 60% of GDP, the government's debt ratio in an annual budget must not exceed 35%, and the proportion of public debt denominated in foreign currency must not be above 5% of income from exports of goods and services.

Piti Srisangnam, a professor at Chulalongkorn University's Faculty of Economics, argued that the law was drafted for optics, as there is no quantitative indicator of what can be done in various scenarios and to what extent the budget deficit and debt are allowed.

In any case, the new government must stick to the fiscal 2019 budget as passed into law, said Dechapiwat Na Songkhla, the Budget Bureau director.

But the new government could make changes to the fiscal 2020 budget, which is being formulated, Mr Dechapiwat said.

He said the new government could manoeuvre budgets already allocated to a ministry or department elsewhere, but the change should not impact the overall integrated development plan.

For instance, shifting budget allocated for water management could affect farmers, therefore the plan has to be scrutinised thoroughly.

Populist policies being promised by political parties can be classified into two categories: spending policies and tax reduction policies, according to Assoc Prof Arnond.

Spending policies will affect the government's fiscal discipline when the government has to seek loans to continue campaign policies, as there is insufficient budget for the expenditures, he said.

But tax reduction policies warrant utmost concern, with the reduction in the value-added tax (VAT) from 7% to 5% promised by the Bhumjaithai Party seen as the most perilous.

This is because almost half of the annual fiscal budget is derived from VAT revenue collection, which would imperil the country's fiscal status if the policy materialises, Assoc Prof Arnond said.

The government garnered net revenue of 588 billion baht during the October-to-December quarter, the first period of fiscal 2019, with 572 billion going to the Revenue Department, the Excise Department and the Customs Department.

Businesses will have to resort to relocating their production bases or shutting down manufacturing sites to offset the higher wage burden, he said. And out-of-the-blue wage hikes could cause inflation to rise swiftly and prompt manufacturers to replace unskilled human labour with robots.

The proposal will eventually exacerbate the fund's worsening financial condition, he said, rendering future students who seek loans for education unable to do so.

The controversial legacy of the rice-pledging scheme under the Yingluck Shinawatra government continues to haunt, with opposition parties arguing that the scheme was rife with corruption, incurring damage as high as 600 billion baht.

Different iterations of the programme have been implemented by several governments in the past, but none pledged prices that were so much greater than market quotes.

Somporn Isvilanonda, senior fellow at the Knowledge Network Institute of Thailand, said that the campaigns hinging on populist policies, especially those that use state subsidies to raise agricultural product prices, will increase financial and fiscal budget burdens.

The most worrying and terrifying policy, he said, belongs to the Pheu Thai Party, whose campaign in the Northeast promises payment for farmers' ploughing and harvesting expenses.

"There are 30 million tonnes of paddy rice produced per year across 64 million rai of rice plantation," Mr Somporn said. "There is no limit [on the subsidy], and this is expected to cost the state subsidies of at least 100 billion baht."

The Bhumjaithai Party plans to use a profit-sharing policy to increase income from agricultural products, which is impossible in practice, he said.

For example, sugar-cane and sugar subsidies have already proved problematic, with Brazil suing Thailand in a World Trade Organization case, alleging that Thai subsidies for sugar producers have dragged down global prices and enabled Thailand to capture a larger market share at the expense of Brazilian producers.

Mr Somporn noted that what hasn't been considered is increasing farm income with non-price policies such as land and water resources development to increase capacity, reduced production costs and production efficiency to strengthen farmers' earnings.

Thailand has been running budget deficits for several years, while the fiscal 2020 budget, estimated at 3 trillion baht, has just 18-19% set for investment, with the rest earmarked for daily budget expenditure, said Somjai Phagaphasvivat, an academic at Thammasat University.

Normally a country's budget deficit should not be above 3% of GDP, Mr Somjai said.

If the next government can reallocate the budget allocated for defence, the budget deficit could be lowered to some extent, he said.

The Future Forward Party has addressed a new economic model, he said, but it remains to be seen whether the party can live up to its promise to restructure Thailand's business monopolies.

"Hardly any party has emphasised tax reforms," Mr Somchai said. "Whether Future Forward can actually implement campaign tax reform measures remains to be seen, but the party will face mounting pressure if it wants to end existing monopolies from the public and private sectors, as well as [large] businesses and the military.

"If half of the campaign policies are implemented after the election ends, that would be good."

The fiscal 2020 budget is based on real economic growth of 4% in 2020, excluding inflation.

Under the plan, the government must increase tax collection and reduce infrastructure spending through public-private partnerships and the Thailand Future Fund.