The Pheu Thai and Palang Pracharath (PPRP) parties are already manoeuvering for the lead in forming a coalition government with the election still too close to call.

Late on Monday afternoon, the Election Commission announced that so far Pheu Thai's unofficial tally of constituency seats stood at 137, compared to PPRP's 97.

Khunying Sudarat said the party will approach other parties which also oppose the prolongation of the junta's rule over the country.

Pheu Thai needs help from other parties to garner the 251 votes for the right to nominate the prime minister -- who is then subject to a vote from the 500 MPs together with the 250 senators. Only the Future Forward Party shares Pheu Thai's explicit aim to end the power of the National Council for Peace and Order. But with only 80 seats projected for the FFP, that would not be enough. Other allies would be needed. (continues below) 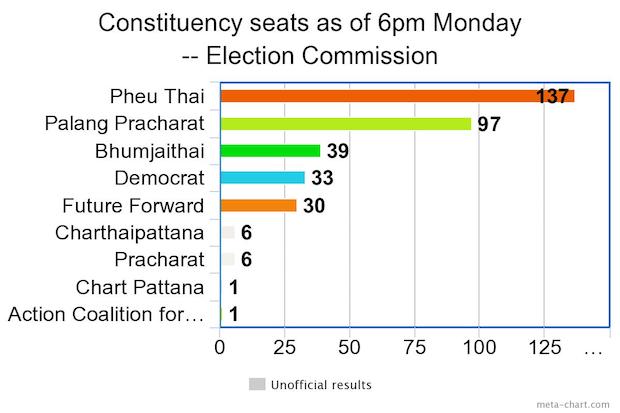 Pheu Thai secretary-general Phumtham Wechayacha repeated the message that the party with the most seats should be allowed to form a coalition government.

Although PPRP is second to Pheu Thai on the total number of constituency seats, the pro-regime party edged its rival on the popular vote, with 7.9 million against 7.4 million.

PPRP spokesman Kobsak Pootrakul claimed the party's winning the popular vote was justification enough to approach other parties to join in a coalition and set up a government. (continues below)

But Palang Pracharath is winning the popular vote

PPRP leader Uttama Kobsak Pootrakul told the Inside Thailand programme on Monday that the party needed around 280 seats to ensure the stability of a new government.

The Bhumjaithai Party, with 51 seats in the bag, is a key party - not having committed itself either way.

Democrat Party leader Abhisit Vejjajiva said after announcing his resignation on Sunday night that the future direction of the party would be decided by the executive board.

Mr Abhisit has made clear on several occasions that the Democrats will not join hands with Pheu Thai.