Future Forward Party leader is greeted by supporters before entering the Pathumwan police station to hear charges against him on Saturday morning. (Photos by Wichan Charoenkiatpakul)

The politician on Saturday was charged with sedition (Section 116 of the Criminal Code), helping a suspect escape (Section 189) and assembling of more than 10 causing unrest (Section 215). If convicted, he is liable to jail terms of up to seven years, two years and six months respectively.

He denied the charges and would give his written testimony on May 15.

As a result of the sedition charge which involves national security, Mr Thanathorn will be tried in the military court, a point he admitted he was slightly worried about.

The charges had been filed against him by the National Council for Peace and Order.

Police said the complaint dates back to 2015, when Mr Thanathorn, who was running his family's auto parts empire at the time, allegedly "provided assistance" to a leader of protesters against the 2014 military coup who violated a junta ban on gatherings of more than five people.

On Saturday morning, many people, carrying flowers and placards, gathered outside the police station to give him moral support. As soon as he arrived, the cheering crowd moved closer to greet him.

Some in the crowd waved placards with messages “We Save Thanathorn”, “Thanathorn poses no threat to national security, but a threat to PM’s seat of Uncle Tu’’ and  “End of dinosaur era’’. Many shouted “Save Thanathorn’’ "Fight Fight!’’ 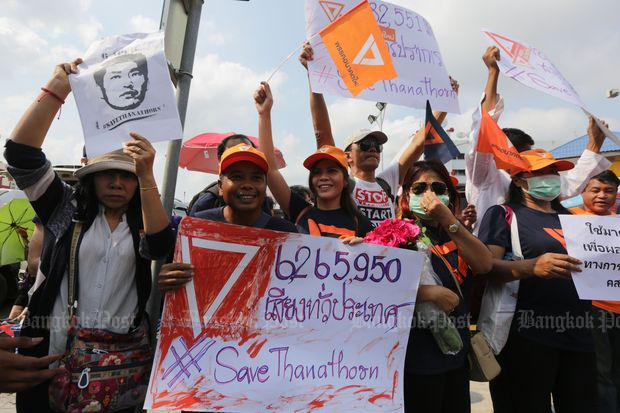 Fans show their support at the Pathumwan police station on Saturday morning.

The former tycoon used a police loudspeakers to thank his supporters.

"I deeply thank you for the support and encouragement. We, Future Forward Party, don’t want anyone to use this opportunity to create a situation. Therefore, I appeal to everyone here not to go inside. Please note that the police are performing their duties. Nobody wants to see what happens today used as a tool for some ill-intentioned group. Everyone should wait outside peacefully. After the procedures, we’ll meet again’’ said Mr Thanathorn.

He also met and thanked diplomats from the US, Britain, France, German, Netherlands and Finland, as well as UN officials, who came to observe the situation, Thai media reported.

Col Burin Thongprapai, the NCPO’s legal affairs chief who filed the complaint, said on Wednesday about 20 demonstrators were at the Pathumwan police station after a rally that year and some of them fled in a white van. Officials found out later that the van belonged to a company where Mr Thanathorn’s mother was a director, said Col Burin.

Mr Thanathorn told Thai media this week the incident involved the demonstration by the New Democracy Movement of mostly students in front of the Bangkok Art and Culture Centre on June 24 that year. A long-time activist since being a student, Mr Thanathorn joined the rally. Police later rounded up the core protesters for violating the junta’s ban on assembly of more than five and took them to the Pathumwan police station but did not detain them.

As Mr Thanathorn’s van left, he saw one of the core demonstrators, Rangsiman Rome, walking alone on Rama IV Road. Although he didn’t know Rangsiman personally, he stopped the van and asked where he was going and offered to take him to his destination. “He definitely was not fleeing and I took him to Suan Ngern Mee Ma, a meeting place of a social volunteer group where we talked more with others.”

Mr Rangsiman later joined FFP and ran in the March 24 election under its banner.

Mr Thanathorn also faces a separate cybercrime charge over a speech he made on Facebook criticising the junta in July. Prosecutors will decide on April 26 whether to put him on trial for the cybercrime charge.

His FFP, which came third with 6.3 million votes in the March 24 election, is part of the anti-coup alliance that declared its wish to form the government in a direct challenge to parties which want Gen Prayut Chan-o-cha to continue as prime minister.