A view across the Chao Phraya River of the new Parliament still under construction in early March. New senators and MPs will have to convene either at the meeting hall of TOT Plc on Chaeng Watthana Road or the Thammasat University auditorium at Tha Prachan. (Photo by Pornprom Satrabhaya)

Several cabinet ministers and prospective senators have started resigning from public offices and company boards, and their names will be submitted for royal approval by Friday, according to a deputy prime minister.

Under the constitution, senators’ names must be submitted to the King for approval within three days after the Election Commission endorses 95% of the 500 elected MPs, expected by Thursday.

Deputy Prime Minister Wissanu Krea-ngam said on Saturday that some ministers had already submitted their resignations because they would become senators.

Deputy Prime Minister Prawit Wongsuwon, who chaired the senatorial screening committee, had sent 400 names to be shortlisted by the National Council for Peace and Order (NCPO), Mr Wissanu said.

He said the NCPO had already gone through more than 80% of the names and was checking the remaining nominees to see whether they were qualified and willing to accept positions.

“Some ministers have quit because they have been told they would be appointed. They will now have to make sure they comply with the qualifications and prohibitions for senators,” Mr Wissanu said.

The weekly cabinet meeting on Tuesday might be the last for several of them, but definitely not for the the government, which will stay on until a new cabinet is formed, he said.

Mr Wissanu neither confirmed nor denied that he would be one of the senators.

According to unconfirmed reports in Thai media, most of the future senators are people from the so-called “Five Rivers” that have been running the country since the 2014 military coup — the NCPO, the National Legislative Assembly (NLA), now-defunct National Reform Steering Assembly (NRSA), the cabinet and the Constitution Drafting Committee.

The 250 senators will join lower house members to vote on the appointment of the next prime minister when Parliament convenes later this month.

Some ministers who have reportedly submitted their resignations, effective before Thursday are:

NLA president Pornpetch Wichitcholchai also submitted his resignation as a member of the Council of State. The letter reportedly cited taking up a position as a senator as the reason, although Mr Pornpetch has not resigned as the NLA president yet.

Other NLA members who reportedly received text messages from the NCPO informing them that they were among the lucky ones are vice-presidents Surachai Liangboonlertchai and Peerasak Porchit, as well as members Somchai Sawangkarn, Wallop Tangkananurak.

At least two of the former members from the defunct NRSA, which was in charge of national reform plans — Kamnoon Sidhisamarn and forensic pathologist Khunying Pornthip Rojanasunand — have not been forgotten either.

As well, some generals who were board members of listed companies resigned from the firms last week, apparently in preparation for a move to the upper chamber, in line with rules to avoid conflict of interest. Among this group are:

Gen Prawit has kept the full list of appointees secret, reportedly to ward off political lobbying. 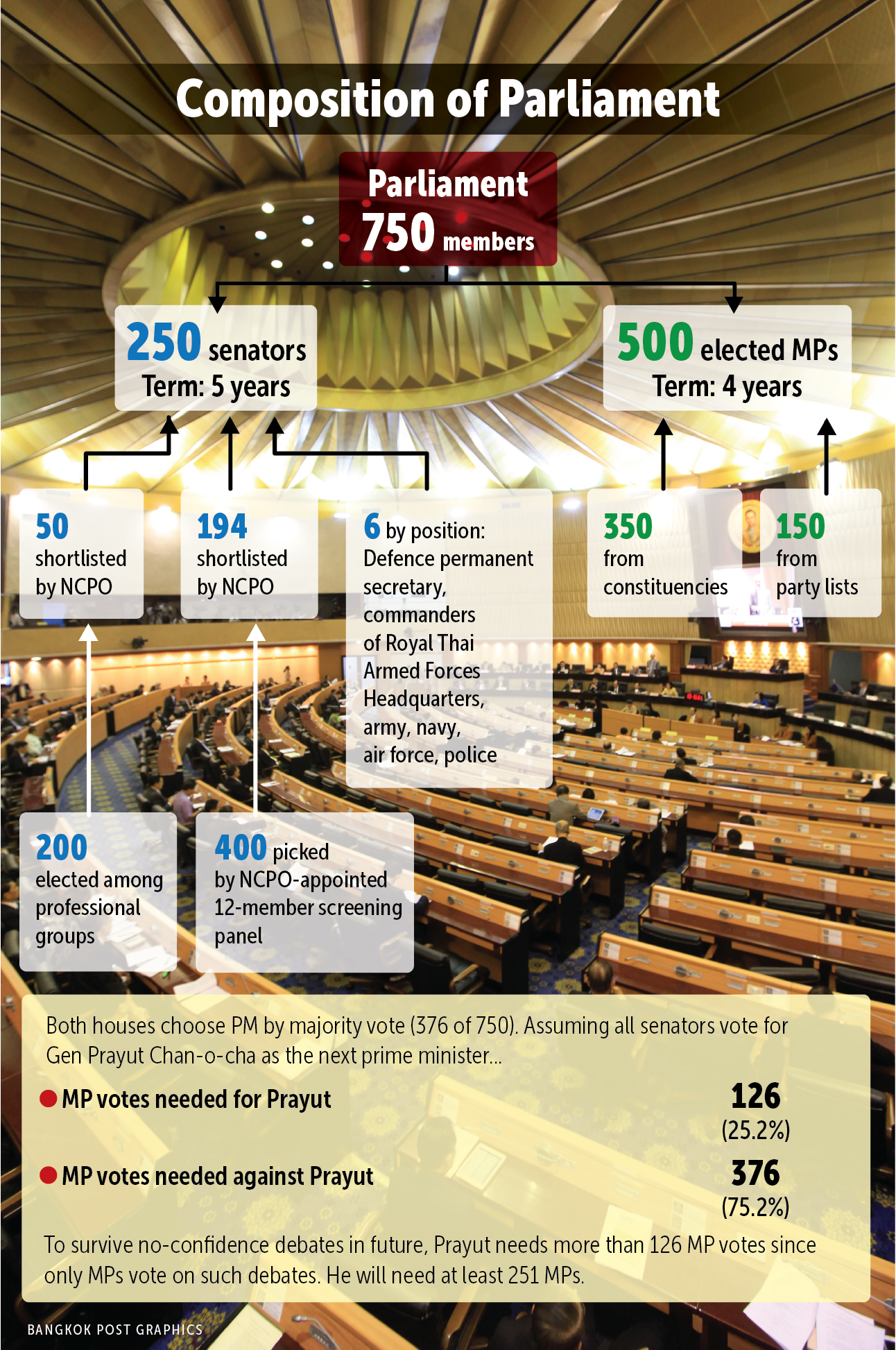