Representatives of the Pheu Thai Party and its allies announce their coalition plan in Bangkok on March 27. (Photo by Prakrit Janthawong)

The Pheu Thai-led alliance's hope of forming a coalition government look dashed after the Election Commission (EC) endorsed 149 party-list MPs on Wednesday, which effectively reduced the number of seats garnered by the bloc to 245.

After the poll agency decided to award one party-list seat to 12 small parties, the Palang Pracharath Party (PPRP) is now moving at full speed to form a rival coalition, and key factions within the party have already begun to discuss the allocation of cabinet seats among its members, said a PPRP source.

The source said that the Bhumjaithai and Democrat parties will be given six seats each in the cabinet, while the Chartthaipattana Party will get two seats.

Veteran MP for Chachoengsao, Suchart Tancharoen, is tipped to be nominated as the House Speaker.

Meanwhile, the Pheu Thai Party and its core ally, the Future Forward Party (FFP), are prepared to challenge the election results which were announced several hours after the Constitutional Court ruled unanimously in the morning that Section 128 of the organic law on elections of MPs is constitutional. 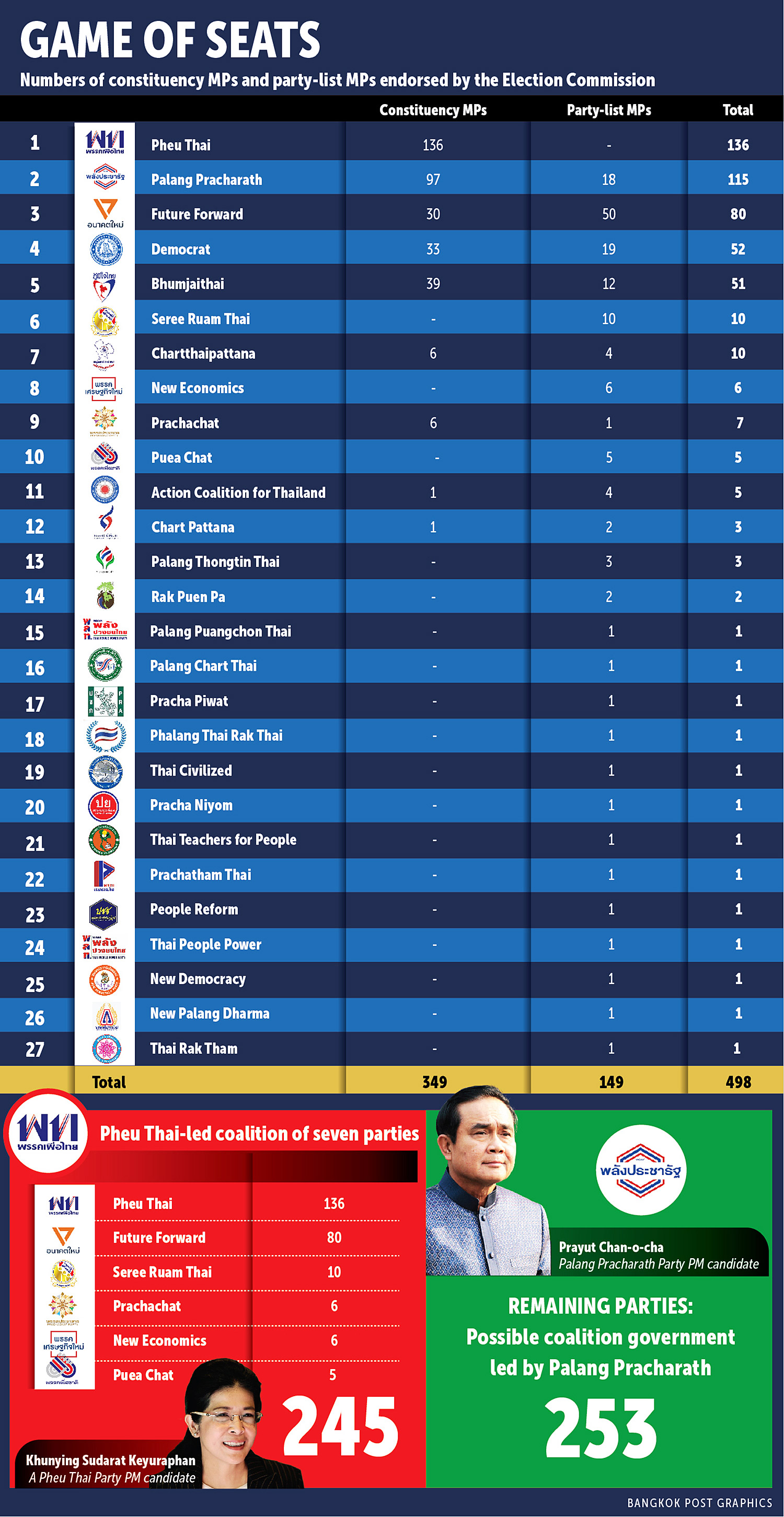 After the court's ruling, FFP secretary-general Piyabutr Saengkanokkul lodged a petition with the EC, saying the ruling did not justify the poll agency's formula for calculating and awarding party-list seats.

Shortly after initial results of the March 24 were made available, the bloc held a press conference to announce it had secured 255 seats, which is comprised of 137 MPs from Pheu Thai, 88 from the FFP, 12 from Seri Ruam Thai, seven from the New Economics Party, seven from Prachachat, five from Puea Chat and one from the Thai People Power Party.

However, based on the official election results, the group's total seats shrank to 245. The FFP saw its party-list seats reduced to 80, the New Economics Party received only six seats, the Seri Ruam Thai received just 10 seats, and one Pheu Thai winning candidate was disqualified.

"It's within the EC's power to decide. If a political party is directly affected by this, or if any designated MPs see their status taken away, they can challenge the EC in court," he said. Using the EC's current formula, the FFP will lose seven to eight seats, which would mean the Pheu Thai-led alliance would only gain about 240 seats instead of 251, said Mr Piyabutr.

The Pheu Thai Party on Wednesday accused the EC of "deliberately using its power against the charter and the law" and vowed to take legal action against the EC. Khunying Sudarat Keyuraphan, Pheu Thai's chief strategist, said the EC owes an explanation to parties that lost their party-list seats as a result of its calculation method, and suggested the court stopped short of endorsing the EC's calculation.

EC deputy secretary-general Sawaeng Boonmee said the list of party-list MPs may still change, depending on the result of the vote re-run in Chiang Mai's Constituency 8 on May 26.