Former prime minister Chuan Leekpai shows a letter of endorsement from the Election Commmission at the EC office in Bangkok on Friday. (Photo by Tawatchai Kemgumnerd)

A third coalition has reportedly emerged as the wildcard in the formation of a new government as mid-sized parties remain tight-lipped about which side they are on.

The Election Commission endorsed 99% of 500 MPs, or 498, earlier this week, giving politicians final figures to play with as they set out to finding allies.

The third alliance is reportedly led by the Democrat Party, with 52 seats, Bhumjaithai (51), Chartthaipattana (10) and Chart Pattana (3). Together, they have 116 seats.

On the anti-military front, Pheu Thai said on Friday that its alliance of seven parties remains strong, with 245 seats. It consists of Pheu Thai (136), Future Forward (80), Seree Ruam Thai (10), New Economics (6), Prachachat (7), Puea Chat (5) and Palang Puangchon Thai (1). The alliance was hard hit by the EC’s party-list calculation method which took away seven seats from FFP. That would put it behind the pro-regime front led by Palang Pracharath (PPRP), provided all other smaller parties join the junta-allied group.

The PPRP coalition now has 130 seats based on public shows of support so far. It is led by Palang Pracharath (115), Action Coalition for Thailand supported by former Democrat fixer and street protest leader Suthep Thaugsuban (5) and small parties that received fewer votes per seat than the 71,000 average and received one seat each (10).

Those believed to be on the fence for now are one other one-seat party, which has said it will join whichever coalition forms a government, Palang Thongtin Thai (3), Rak Puen Pa (2) and Palang Chart Thai (1), totalling 7.

Although PPRP’s key figures have claimed they were "more than 100% sure" they had the numbers to form a government, the parties assumed to be on its side earlier — notably the Democrats and Bhumijaithai — have yet to go public with their support.

Instead, Bhumjaithai leader Anutin Charnveerakul posted on Facebook on Thursday that his party had yet to talk to anyone and was still “listening to the people”.

Pheu Thai secretary-general Phumtham Vechayachai said on Friday that in the absence of open support from mid-sized parties, Pheu Thai was not convinced by PPRP’s claim.

Asked whether his alliance would attract others, especially the third coalition, Mr Phumtham said: “It depends on the ideology of the third coalition but it shouldn’t take too long to decide because people’s problems can’t wait.”

Further complicating the issue is the Democrats' insistence that they would not join Pheu Thai under any circumstance.

The Democrats' final position should become clearer after May 15, when members elect a new executive board and leader to succeed Abhisit Vejjajiva, who resigned following the party's disastrous showing in the March 24 polls. 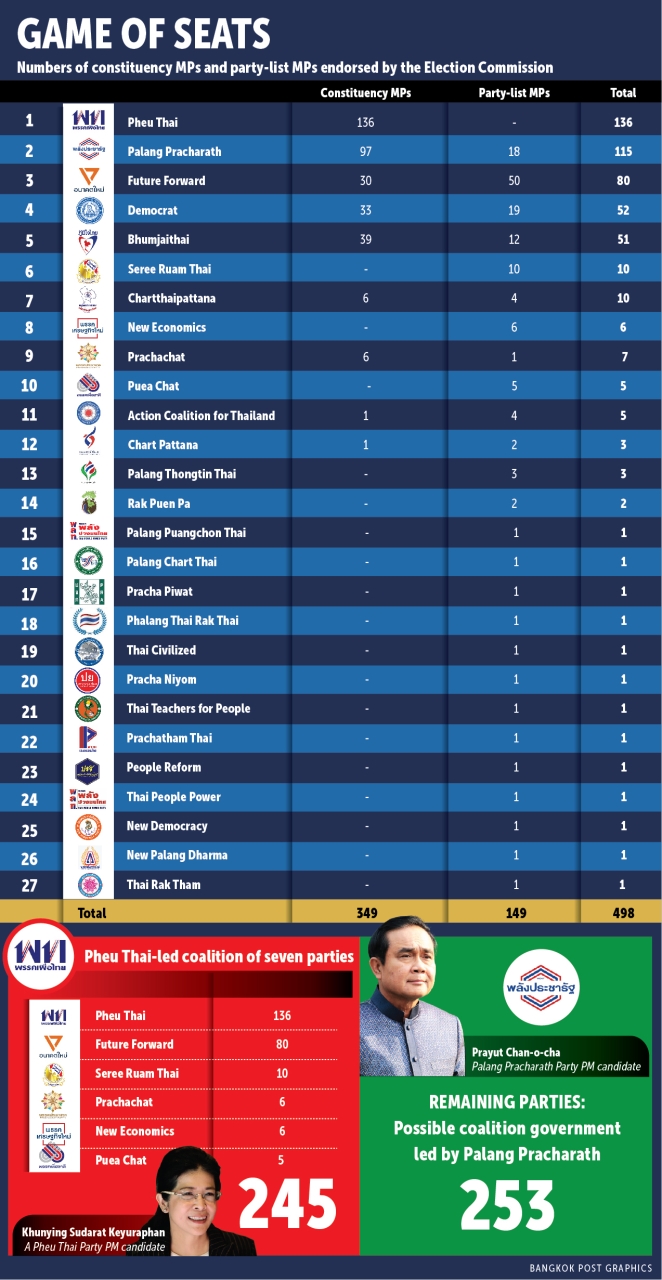