The pro-regime Palang Pracharath Party's (PPRP) chances of forming a coalition government have been thrown into doubt as concerns mount that the Democrat Party under its newly elected leader may switch sides and join an alliance led by the Pheu Thai Party.

The Democrats on Wednesday elected party acting leader Jurin Laksanavisit to be their new leader.

His win was widely expected when the party-list MP became the acting Democrat leader after the resignation of Abhisit Vejjajiva following the party's disastrous showing in the March 24 election.

The first major decision for the party and its new board of executives is to decide whether to partner with the PPRP, which has nominated Prime Minister Prayut Chan-o-cha as its prime ministerial candidate, or work as an independent opposition.

However, several Democrat MPs want to join the PPRP-led alliance and set conditions to bargain for key cabinet seats to push for their election campaign pledges, a Democrat Party source said.

"We are weighing up which option is best for the party. We seem to be on the horns of a dilemma whether we join the PPRP-led alliance or the Pheu Thai-led bloc. But if we choose to be an independent opposition, we don't know if the people will agree with this," another source who sits on the newly elected executive board said.

Another source from the party said that following Mr Jurin's win, the PPRP has become jittery that the Democrat Party, which has been speculated to be the PPRP's potential ally, may ditch the PPRP-led alliance.

This is because Mr Jurin and his key supporters -- former leader Abhisit, Chuan Leekpai, who is the party's chief adviser, and Banyat Bantadtan, another former party leader, made it clear the Democrat Party should not back the PPRP's bid to set up a government led by Gen Prayut, he said.

They see the PPRP as the Democrats' political rival as the PPRP snatched House seats in the South and Bangkok, which are the party's strongholds, he said.

Instead, they agreed the Democrat Party should join the Pheu Thai Party and the Future Forward Party (FFP) in forming another alliance to compete against the PPRP in the race to set up a new government.

The parties share a common aim of amending the current constitution, which is widely seen as a tool to help Gen Prayut prolong his grip on power.

Targeted for change are provisions regarding the regime-appointed 250 senators, the same source added. 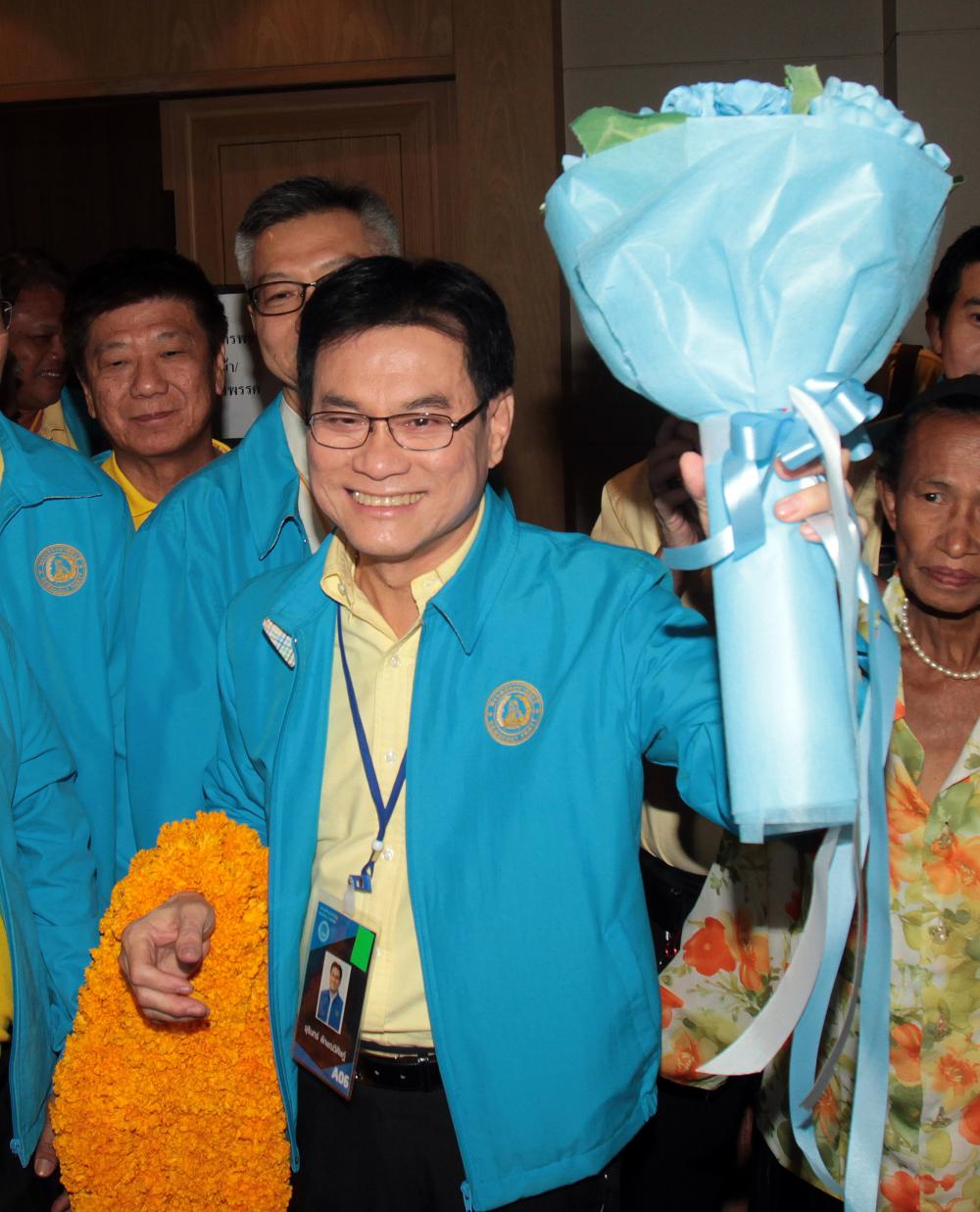 Jurin Laksanavisit holds a bouquet of flowers he received upon winning the Democrat Party leadership election on Wednesday. (Photo by Tawatchai Kemgumnerd)

The alliance would have a combined number of 361 MPs, still not enough to vote for any new prime minister they nominate.

They still need the support of another 15 MPs to beat the 250 regime-appointed senators and the PPRP, which has 115 MPs, to choose a new premier.

In light of this, if the Democrat Party under Mr Jurin agrees to work with the new alliance to form a coalition government, the Democrats would have to draw "cobras", or renegade politicians from the PPRP-led bloc, to join the new alliance, the source said.

The source added that Pheu Thai and the FFP have agreed with the proposed new alliance and they would agree to let Mr Abhisit become the next prime minister.

The move prompted the PPRP to force 11 small parties to pledge their support for the PPRP-led alliance to ensure the new rival alliance does not materialise, the source said.

Another source said that if the new Democrat executives partner with the Pheu-Thai led alliance to back Mr Abhisit to become the next prime minister, many Democrat MPs would likely subsequently quit the party because they could not accept it working with Pheu Thai.

Majority do not believe in PPRP-Pheu Thai political deal: Poll

A majority of people do not believe in a speculation that the ruling Palang Pracharath Party and the opposition Pheu Thai have reached a political deal over the method to calculate party-list MPs and to support PPRP leader Prawit Wongsuwon to succeed Prayut Chan-o-cha as prime minister, according to the result of an opinion survey by National Institute of Development Administration, or Nida Poll.

The Tourism and Sports Ministry is seeking to extend the opening hours of the Full Moon Party by two hours until 4am as the renowned monthly beach party is back in full swing.

Most people worried about monkeypox: Poll

Most people are worried by the discoveries of monkeypox cases in Thailand and most of them already have some knowledge and understanding of the virus, according to survey by Suan Dusit Rajabhat University, or Suan Dusit Poll.

Most people worried about monkeypox: Poll