Mingkwan Sangsuwan, then New Economics Party leader, gives a wai when he led the MPs of his party to report themselves at a new Parliament building in Bangkok on May 13 after the Election Commission endorsed them. He resigned as party leader, effective on Thursday. (Photo by Tawatchai Kemgumnerd)

Mingkwan Sangsuwan has resigned as the leader of the New Economics Party while the Pheu Thai Party has scrapped a meeting planned with its allies in a double blow in one day to the anti-regime alliance.

Mr Mingkwan, a former deputy prime minister during the Samak Sundaravej government, posted on Facebook on Thursday his resignation letter to the registrar of political parties. A stamp of the Office of the Election Commission (EC) showed the letter was received on Thursday morning.

In the letter, Mr Mingkwan wrote that as the party leader, his responsibilities involved drafting economic policies and communicating with people and mass media only.

Other activities — administration, member and candidate recruitment, fund-raising and all financial operations —  were the responsibilities of deputy party leader Supadit Akasarerk and the party's executive team, the letter said.

"As the election is over, now is the right time for me to resign as leader of the New Economics Party," Mr Mingkwan wrote. His resignation took effect on Wednesday.

The letter noted he resigned only as party leader and would remain as its member and list MP. Mr Supadit would act as the New Economics Party leader until a new executive board is elected.

He also wrote in the letter that his party's six list MPs, himself included, would keep their earlier promises to the people; namely, to do their best in performing duties and upholding the royal institution.

Conspicuous in its absence in the letter is Mr Mingkwan's pre-election vow to stay with the pro-democracy alliance and not to support power continuation by the regime.

New Economics is the only party which did not formally join the alliance led by Pheu Thai to form a government shortly after the election. Mr Mingkwan did not show up at the briefing nor did he sign the memorandum on his party's behalf, raising questions about his stand. He later dispelled the suspicion by reiterating his stand but rumours have since spread that his party's other five list MPs may not share his position.

"During vote campaigns, they said they opposed any attempt to extend the regime's power and supported a prime minister candidate from the allies. Now they seem to change their stance," Pol Gen Sereepisuth said.

The third blow on Thursday is the Constitutional Court's ruling to suspend FFP leader Thanathorn Juangroongruangkit from performing his MP duty over his possible media shareholding while applying as MP after it accepted the EC's case for deliberation.

The ban effectively deprived the anti-regime alliance of another vote when Parliament convenes over the next few days.

Up until Thursday, the anti-regime claimed 245 votes in the House, compared to 137 of the pro-regime front led by the Palang Prachararth Party. Both need at least 251 to ensure a majority. (see chart below)

In any case, the pro-regime side already has enough votes in both houses (376) to keep Gen Prayut Chan-o-cha at Government House, provided all 250 senators vote for him. 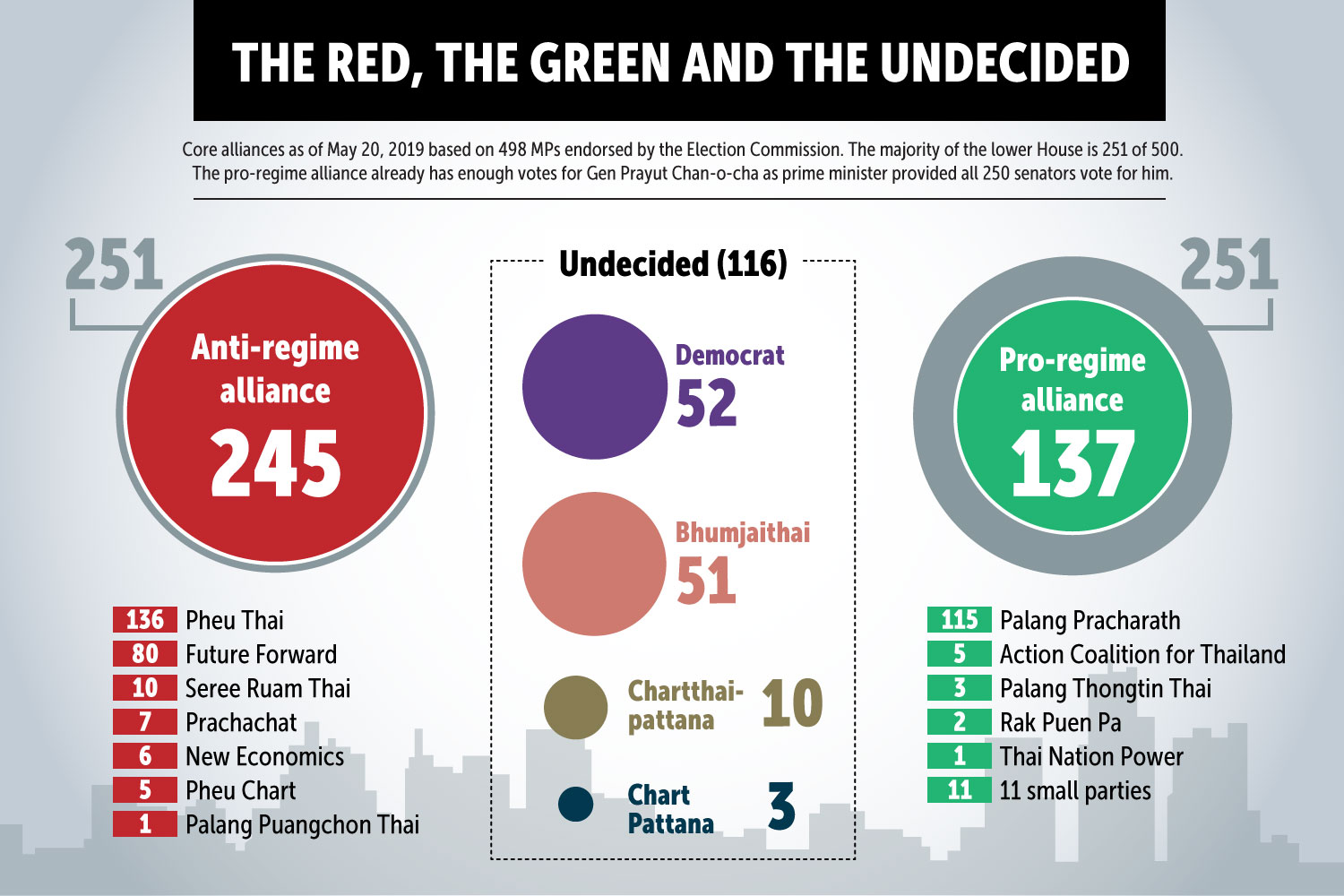