Supporters of the Future Forward Party on Saturday flash a three-finger salute inside a hall at Thammasat University's Tha Prachan campus, where the party organised an event to mark the first anniversary of its founding. (Photo by Chanat Katanyu)

The Future Forward Party will next week file a motion to amend two sections of the constitution which grant immunity to the junta and empower senators to choose a prime minister alongside MPs.

Secretary-general Piyabutr Saengkanokkul said the party would need help from its six allied parties since 100 votes, or one-fifth of the 500-member House, are needed just to get the motion onto the agenda.

Section 279 endorses as legitimate and constitutional all announcements, orders and actions of the National Council for Peace and Order (NCPO), which has run the country since the coup in May 2014.

Section 275 allows senators to jointly vote on a prime minister along with MPs.

Mr Piyabutr admitted that to successfully amend the constitution, his party would also need votes from one-third (84) of the 250 senators. That is a tall order given how the junta-appointed senators — every single one of them except the speaker who abstained — voted to choose NCPO chief Gen Prayut Chan-o-cha as prime minister (see chart).

“As for concern the senators may not support it, we’re counting on people to send them the signal,” he said during an event held on Saturday at Thammasat University to celebrate the party’s first anniversary.

“Once the motion [to amend the charter] enters the House, we hope people who watch the debate will send the signal to the senators. After that, we’ll hold forums to serve as model constitution drafting councils all over the country to hear people’s opinions on which sections should be changed.”

Apart from the constitutional amendments, the young party has vowed to push forward bills based on its campaign pledges, including those ending military conscription, liberalising the alcohol industry and decentralisation.

As for its Opposition role, the party has instructed its MPs to keep minutes of all meetings and report to the public on the progress of the agenda.

“We’ll take seriously our job as the Opposition. And we’ll definitely file a motion for a no-confidence debate as soon as the situation warrants it,” the 38-year-old former Thammasat University law lecturer said.

The party is well aware that it faces a rough road ahead but believes it doesn’t have much choice, he added.

“We don’t know how many more days our party will last given the accusations and lawsuits against us. But the more lawsuits we face, the more convinced we are that we’re on the right path. The powers-that-be view us as a threat and have to stop us at any cost. We are singled out because we’ve met our targets. Everybody knows party dissolution is not strictly a legal issue. There’s a political aspect to it.

“We have two options: do nothing and hope for the best that we’ll be spared, or work harder so people have more faith in us. The first has been proven as useless and we’ll be dissolved anyway so we have to work hard to the point that people feel we shouldn’t be destroyed and should be allowed to grow. If we achieve that, it will be our strongest shield. Everybody can take part. Thailand can be changed in our lifetime.

"We'll bring all voices on the streets to Parliament. By then, change is possible," he concluded.

The charter written by a junta-appointed panel and approved in a public referendum in 2016 has been designed to make amendments very difficult.

First, at least 100 MPs are needed to submit a motion, which will then be deliberated in three readings by a joint sitting of both houses.

To pass the first reading, half the votes of both houses are needed (376). The votes must include at least one-third of the senators (84).

The second reading involves deliberation by section, which requires a majority vote of both houses to pass. People are allowed to propose ideas or opinions at this stage.

Fifteen days after the second reading is passed, the bill must be approved by a majority (376) in the third reading. However, of these 376 votes or more, they must come from parties whose members are not cabinet ministers, House speaker or his deputies at not less than 20% of the votes of these parties combined, as well as one-third of senators (84). 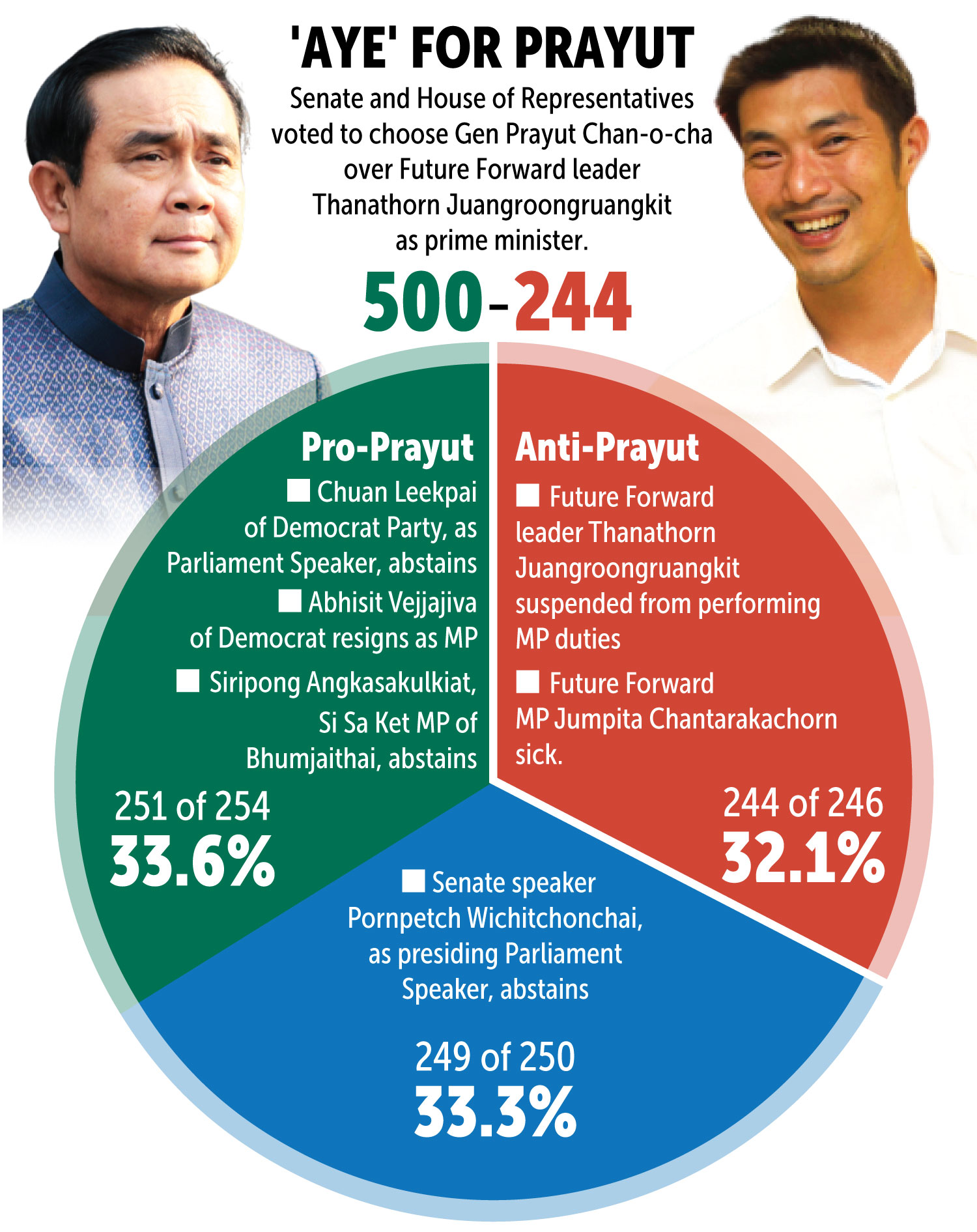 FFP leader Thanathorn Juangroongruangkit said many people are dissatisfied with the return of Gen Prayut Chan-o-cha. He said Gen Prayut's victory was secured by votes from 250 senators appointed by NCPO. "That affected and distorted the decisions of political parties," he said. "We knew Gen Prayut would come back no matter what," Mr Thanathorn told a forum which was part of the event.