Prime Minister Prayut Chan-o-cha is already feeling the heat over his proposed cabinet line-up with questions being asked about the public image of some of the candidates.

The formal cabinet line-up is still not settled, a source said, adding that some politicians earlier tipped to be made cabinet ministers may let their family members take ministerial posts to act as their proxies.

One is the Ministry of Digital Economy and Society with Palang Pracharath Party (PPRP) spokesman and former PM's Office Minister Kobsak Pootrakul earlier expected to take the post. However, reports have emerged of Akkara Prompao now being tipped to for the role.

Mr Akkara, a former deputy chairman of the Phayao provincial administrative organisation, is a younger brother of Capt Thammanat Prompao, a PPRP MP for Phayao and chief of the PPRP's strategic committee in the North. 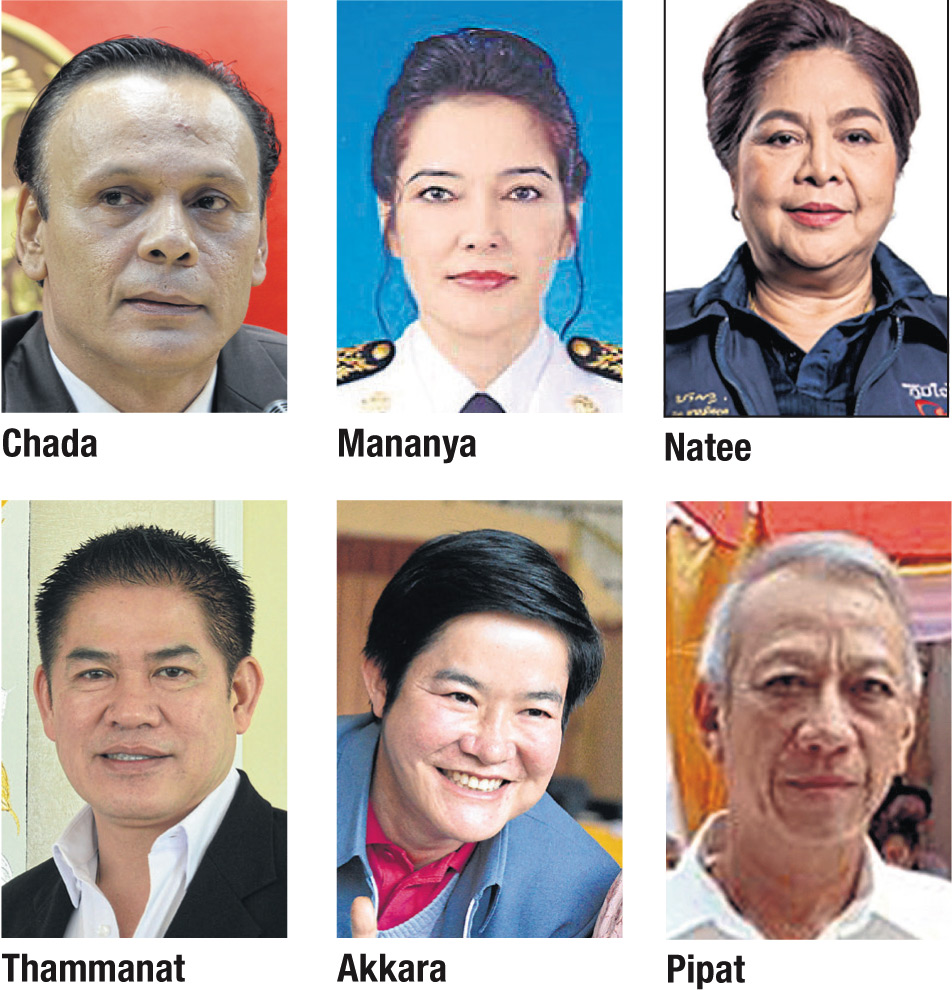 Capt Thammanat is said to be involved in several enterprises including one that is alleged to hold sway over lottery ticket distribution at Bangkok's Klong Toey market.

He earlier told reporters that he would not join the new cabinet but would let a family member take a ministerial post.

The source said Capt Thammanat was concerned about "a public image problem", so he decided to let his younger brother take the digital economy and society portfolio instead.

Similarly, the Bhumjaithai Party, which is expected to get seven cabinet seats, previously proposed Uthai Thani MP Chada Thaiseth to be deputy interior minister but the source said that Gen Prayut disagreed out of concern for his reputation.

On July 23, 2015, police commandos raided a home of Mr Chada and 11 other residences of influential figures in Uthai Thani province, as they hunted two murder suspects.

One police team raided and searched Mr Chada's home in tambon Uthai Mai in Muang district. He was suspected of sheltering two suspects wanted for the murder of a senior police officer shot dead in 2011.

Mr Chada has reportedly proposed his younger sister Mananya to replace him as deputy agriculture minister in the next government and Bhumjaithai Party has agreed.

Also, Natee Rachakitprakan, a Bhumjaithai list MP, was earlier expected to be made sports and tourism minister in the next government, though she later decided to let her husband Pipat, owner of an oil trading and retailer company operating PT filling stations, take the post instead.

Seri Wongmontha, an academic and supporter of Gen Prayut, warned that infighting in the PPRP over cabinet seat allocation could make people lose faith in the party.

On his Facebook account, he wrote that PPRP members should "go easy" with their demands for cabinet posts while Gen Prayut should rise to the occasion and stand firm against some unreasonable demands from within the party.

"The PPRP MPs should be aware that they won the election because voters wanted Gen Prayut back in as premier," he said.

He insisted that if people lose confidence in the party, it will find it hard to win big in the next poll.

Gothom Arya, an adviser to the Institute of Human Rights and Peace Studies of Mahidol University, said that the allocation of cabinet seats was based on the number of House seats each political group won and this only benefits the parties involved and not the public.

Meanwhile, PPRP MP for Nakhon Si Thammarat Rong Boonsuaykwan on Mondaysaid that a group of 13 PPRP MPs in the South wanted the prime minister to have a cabinet that represents people from all regions.

If the group remains unrepresented in the cabinet, it will have a lot of explaining to do to the voters, Mr Rong said, adding that if they were not allocated a cabinet seat, the PPRP will likely be swept aside in the South in a next election.

Pheu Thai spokeswoman Ladawan Wongsriwong said people with questionable backgrounds or without the right credentials for cabinet jobs should not be allowed to be ministers.

Anybody with a history of conflicts of interest should also be sidelined, she said.