PM Prayut Chan-o-cha leads 35 other cabinet ministers to take the oath of office before Their Majesties the King and Queen at Amphorn Sathan Residential Hall in Dusit Palace in Bangkok on Tuesday. (Screenshot from TV Pool news)

Prime Minister Prayut Chan-o-cha and his cabinet members have been sworn in before His Majesty the King on Tuesday.

His Majesty granted them an audience at Amphorn Sathan Residential Hall, or Ambara Villa, in Dusit Palace in Bangkok at 6pm.

Gen Prayut, who was royally appointed prime minister for the second term on June 11, said the cabinet was deeply grateful for His Majesty’s encouragement. The monarch asked the cabinet to work for the country and people and all cabinet ministers would do their best, he said after the ceremony. (continued below) 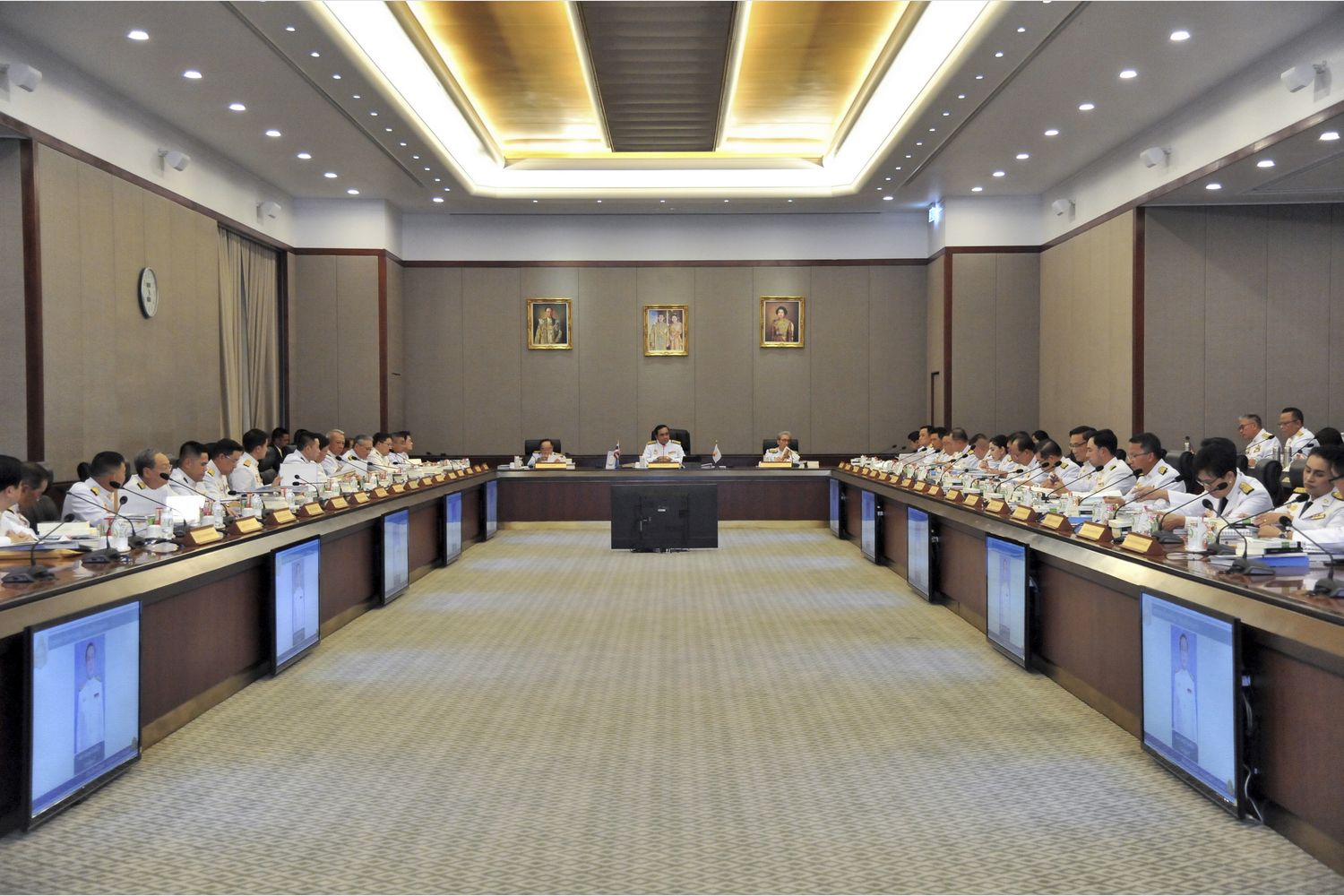 Cabinet ministers have their first meeting at Government after being sworn in on Tuesday evening. (Government House photo)

At the first meeting scheduled after the ceremony, the cabinet members from 19 coalition parties discussed how to work together. Gen Prayut said he was glad to work with them and welcomed them all. Other issues to be discussed included preparations for the government’s draft policy statement to be declared to Parliament and the draft budget bill.

“The country can't stop no matter what problems arise. We must find ways to tackle them, put an end to problems deemed unnecessary and promote unity among the people. Our ultimate goal is the nation, religions, the monarch and the public. People are pinning their hopes on the government,’’ said Gen Prayut.

Deputy Prime Minister Wissanu Krea-ngam said earlier once approved, the policy statement would be printed and copies of it sent to all MPs within 24 hours.

The cabinet was expected to also endorse at the meeting the appointment of Disthat Hotrakit as PM’s secretary-general, said Mr Wissanu.

Mr Disthat is considered a key legal expert, serving as secretary-general of the Office of the Council of State and member of the National Legislative Assembly. On top of this, he used to be a member of state enterprise boards, Thai media reported. (continued below) 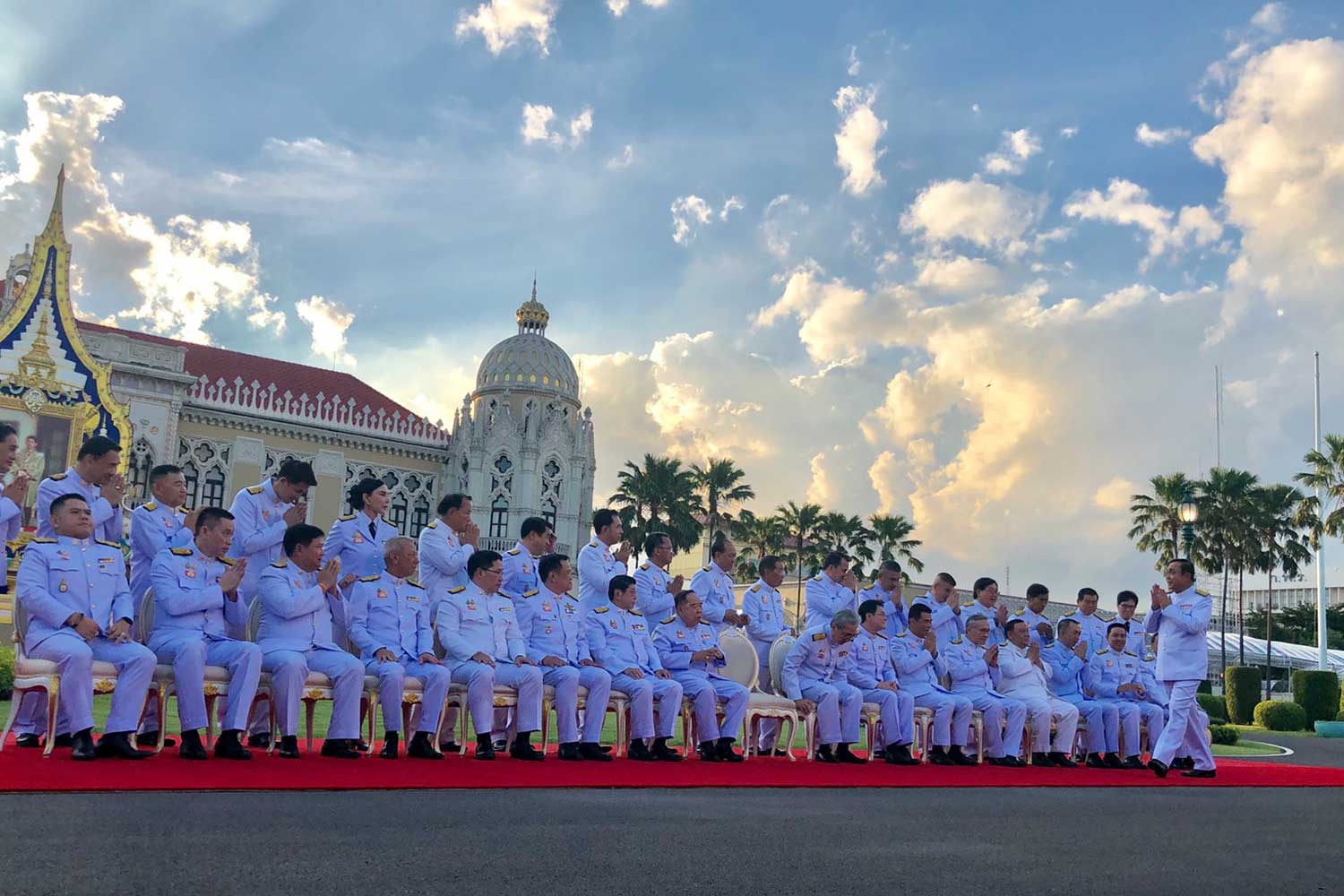 Prime Minister Prayut Chan-o-cha walks to take his seat in a group photo taken before the swearing-in ceremony of 36 cabinet ministers on late Tuesday afternoon at Government House. (Photo by Wassana Nanuam)

Before the ceremony, the atmosphere at Government House was lively in the afternoon. Wearing white uniforms with the Prime Minister’s Office insignia, cabinet ministers from the Bhumjaithai and Democrat parties arrived at Government House at around 2pm.

The Secretariat of the Cabinet had arranged vehicles to take all 36 cabinet ministers to the royal residential hall.

The swearing-in of the ministers in the presence of His Majesty the King is required by the constitution. After they are sworn in, the government will have to deliver a policy statement before the House of Representatives which is scheduled to last three days from July 25.

The key political consequence of the ceremony is the National Council for Peace and Order, which ruled the country for five years, ceased to exist once the cabinet was sworn in.

The cabinet ministers will officially begin working on July 18. 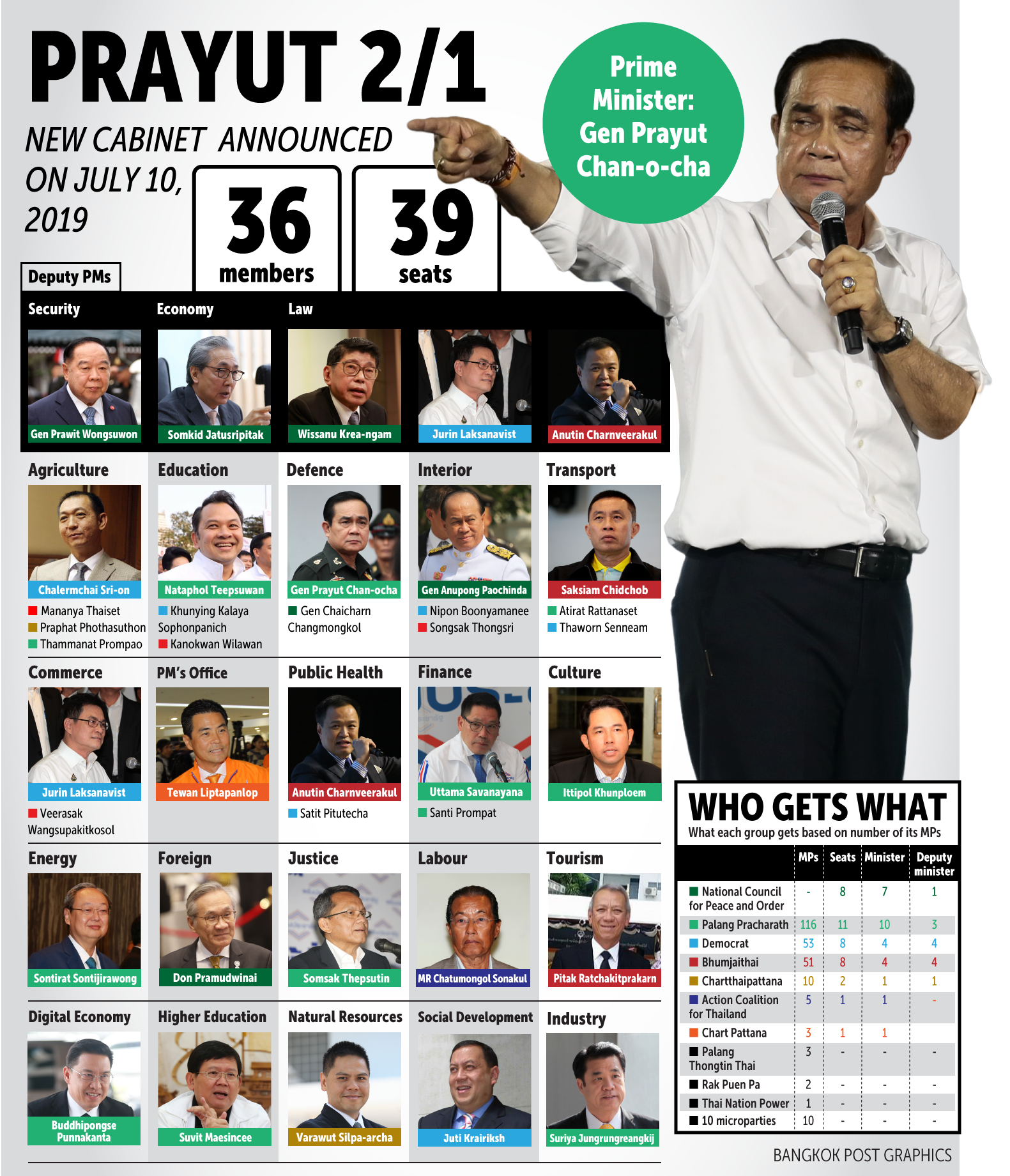