Former commerce minister Boonsong Teriyapirom appealed his 2017 sentencing, only to learn that his jail term will now be extended. (Bangkok Post file photo)

The Supreme Court on Friday added another six years to the jail sentence of former commerce minister Boonsong Teriyapirom, bringing the total to 48 years for his involvement in corrupt government-to-government rice contracts.

The decision by the court’s Criminal Division for Holders of Political Positions was part of a ruling on an appeal filed by Boonsong, former deputy commerce minister Poom Sarapol and 26 other defendants after he was sentenced to 42 years by the same court on Aug 25, 2017.

Sentences handed down by the division that tries political corruption cases can be appealed under the 2017 Constitution, even though it is part of the country’s highest court.

The judges took eight hours to read their ruling on Friday. Mr Poom’s sentence was upheld at 36 years.

A total of 28 people, including politicians and government officials, were charged with committing multiple offences in violation of the law on price collusion, the Criminal Code and the anti-corruption law, with reference to the rice scheme.

In the 2017 ruling, the court found that the G2G contracts to export pledged rice to China were fabricated and in fact involved sales of the pledged rice to private companies in Thailand, which in turn sold them to a third party.

Mr Boonsong was the only one to have his jail term lengthened, while some others who walked free after the first ruling in 2017 were either fined or received jail terms.

Former prime minister Yingluck Shinawatra was sentenced in absentia by the court to five years in jail a month later for negligence for failing to stop corruption in her government’s rice-pledging programme. Yingluck fled the country before the court handed down its ruling in Aug 25, 2017. 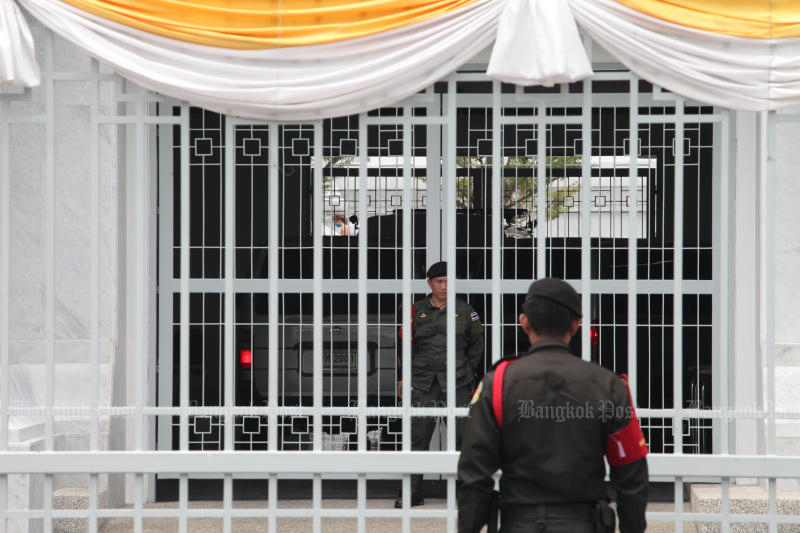 Security personnel guard the Supreme Court on Friday before judges read the ruling on the government-to-government rice deals. (Photo by Apichart Jinakul)