Deputy Agriculture and Cooperatives Minister Capt Thamanat Prompow talks to reporters as he dismisses a report by an Australian media outlet about his conviction in an Australian court on drugs charges. (Photo by Chanat Katanyu)

Prime Minister Prayut Chan-o-cha on Tuesday played down criticism of Deputy Agriculture and Cooperatives Minister Thamanat Prompow following an Australian press report of his conviction in Australia in connection with drug charges, saying every government has had its flaws.

Speaking after a cabinet meeting on Tuesday, Gen Prayut said that he would no longer comment on legal cases against cabinet ministers because they had been clarified by those involved.

The explanation should have laid the matter to rest, the prime minister said.

Meanwhile, Capt Thamanat said on Tuesday the Australian drug case had occurred more than 30 years ago and he had already clarified the matter.

Asked if he had confessed in return for a reduced jail term, Capt Thamanat insisted that he never confessed because he had done nothing wrong. He also dismissed as untrue the Australian report which cited court files.

He said he was convinced that the report was written by someone in Thailand as part of a move to discredit the government, and had instructed his lawyers to prepare civil and criminal suits against those involved.

Deputy Prime Minister Prawit Wongsuwon said on Tuesday the government is unlikely to be affected by the Australian report. Asked about the deputy agriculture minister's jail sentence in Australia for heroin smuggling in 1993, Gen Prawit said Capt Thamanat had to handle the problem himself.

The Sydney Morning Herald on Monday published an investigative report titled "From sinister to minister: politician's drug trafficking jail time revealed", based on the court documents.

The Herald reported that Capt Thamanat, who went by the name 2nd Lt Manat Bophlom at the time, was among key members of a drug smuggling gang. The report cited court files detailing police reports, some of which had been obtained by using listening devices in a Sydney hotel room where the gang members met. He was released and deported immediately after four years in jail, the report said.

When asked whether the case would affect the government, Gen Prawit dismissed it as old news and said Capt Thamanat had said he was cleared of the charges.

Gen Prawit said he did not believe the report would hurt the government's image since it was a matter concerning one person and had nothing to do with the country. More importantly, Capt Thamanat had been released from prison.

He shrugged off speculation the issue could be used to discredit the government. He also declined to comment when asked whether there were any movements abroad that wanted to erode the government's credibility.

Adisorn Piangket, a spokesman of the opposition leader, on Tuesday said that Gen Prayut should remove Capt Thamanat from the cabinet to avoid repercussions that could damage the government's public image and land the prime minster in trouble.

Thammasat University law lecturer Arnon Mamout said that since Capt Thamanat was not convicted by a Thai court, the matter was political rather than legal. The debate on his suitability for office will continue and undermine the government's credibility, he added.

In July, as Capt Thamanat was eyeing ministerial office, he told the press that the heroin charges against him were "minor offences" and he was simply "in the wrong place at the wrong time". He claimed the Australian court acquitted him after eight months in prison, proving his innocence. 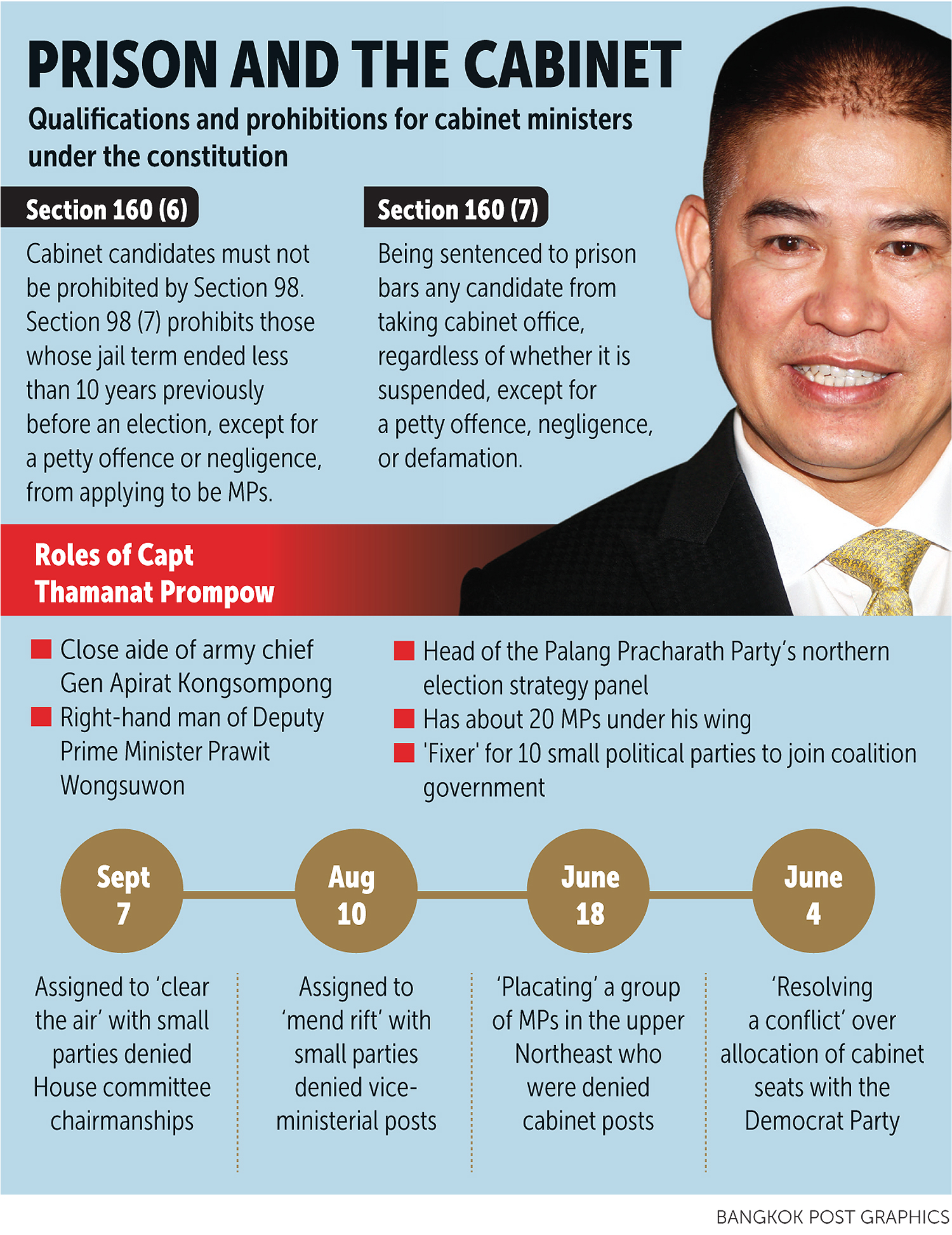