Thamanat to slap 100 lawsuits on critics

Wissanu says a minister needs to have only bachelor's degree so fake or not, doctorate degree doesn't matter

Deputy Agriculture and Cooperatives Minister Thamanat Prompow speaks with reporters at Parliament in Bangkok on Friday. (Photo by Apichart Jinakul)

Deputy Agriculture and Cooperatives Minister Thamanat Prompow, known as the coordinator of the coalition government, has vowed to file around 100 lawsuits against those who he believes have lied about his past.

He said on Friday a network of people had attacked him about his background for a long time and he would now strike back.

"They will face consequences for what they did. I’ve said I’ll take it seriously. I’m not joking. I’ve told my lawyer to proceed with these 100 cases," said Capt Thamanat of the coalition-leading Palang Pracharath Party.

He added media organisations were not among his targets, only individuals.

The Phayao MP said he had waited for his opponents to show all their cards and would then respond through legal channels.

The former Pheu Thai MP is facing criticism from the disclosure of court documents by an Australian newspaper that showed he might have lied about his conviction and the time he did in Australia in a heroin-smuggling case in 1993.

He told the House he did not confess but a photocopy of the NSW Court of Criminal Appeal judgment dismissing an appeal on sentence severity shown by The Sydney Morning Herald indicates otherwise.

Some social media users subsequently looked into other areas of his life and found his doctorate degree might have come from an unaccredited institution that did not exist.

On the latter case, the 53-year-old reiterated on Friday he did not forge his educational background.

"Who would have done that? Yet the criticism continued. Don’t ask me about it anymore because I’ve explained everything," Mr Thamanat said. 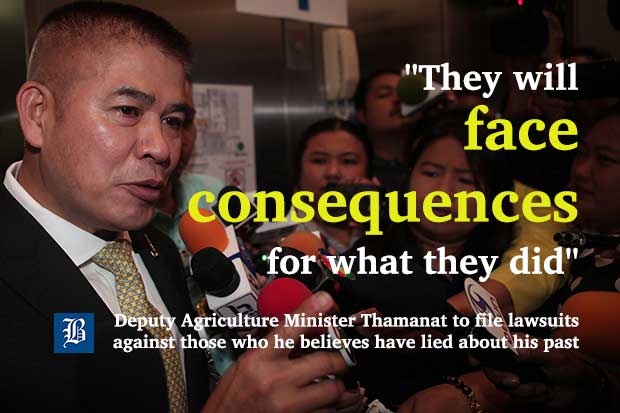 The deputy agriculture minister, who earlier claimed he was the “artery” of the coalition due to his crucial role of keeping a dozen coalition parties happy, was facing criticism about his suitability as a minister.

Opposition's Sereepisuth Temeeyaves, chairman of the House's anti-corruption committee, said on Friday that the controversies involving Capt Thamanat’s past would be its first assignment and Capt Thamanat would have to testify before it.

Commenting on his doctorate degree case, Deputy Prime Minister Wissanu Krea-ngam suggested on Friday even if his degree was fake, Capt Thammanat could still be a minister because the constitution requires an MP to have only a bachelor’s degree at a minimum, which he already obtained from the army school.

Mr Wissanu declined to directly answer when asked whether a false declaration of an educational degree was a prohibition for public office.

“Don’t mix the two issues. In terms of qualifications, he meets every one of them. But ethics is entirely another issue and requires a long investigation to prove,” he said.

Asked whether Capt Thamanat may continue to serve as a deputy minister, albeit not very honourably, Mr Wissanu said he did not need to reply because reporters already knew the answer.