Thailand would not allow entry to Cambodian opposition founder Sam Rainsy, Prime Minister Prayuth Chan-ocha said on Wednesday, after the self-exiled dissident said he planned to return to Cambodia via Bangkok.

At a news conference. Gen Prayut referred to Thailand's ties with Cambodia as a fellow member of the Association of Southeast Asian Nations (Asean)  grouping.

"According to our commitment to Asean, we will not interfere in each other’s internal affairs, and we will not allow an anti-government person to use Thailand for activism," Gen Prayut said.

"I have ordered this, so he probably won’t get in."

Sam Rainsy on Wednesday tweeted a photo of his airline ticket from Paris to Bangkok, from where he would travel to Thailand's border crossing with Cambodia. Hun Sen has ordered airlines not to allow him to board flights into Phnom Penh.

Mu Sochua later flew to Indonesia, where the Cambodian embassy on Wednesday requested she be arrested after she attempted to hold a news conference.

Rainsy said on Wednesday he will return on Saturday to face arrest amid a crackdown at home on members of his banned party and Malaysia's detention of two party activists trying to return.

He said that he was shocked and disappointed by Thailand's position, but that he would still try to carry out the plan to return.

“I don't give up. I will try to the last minute. I think no one should stand with Hun Sen, he is a dictator,” the 70-year-old politician, who maintains dual Cambodian and French citizenship, told The Associated Press by phone from Paris.The former finance minister has vowed to return to lead demonstrations against the one-party rule of longtime Prime Minister Hun Sen, whom he called "a brutal dictator".

"For those of you who know me, this may just be the last time you will see me alive as a free man," Sam Rainsy said in a video message posted on Twitter and YouTube.

Hun Sen has accused the opposition of fomenting a coup, and his government has arrested at least 48 activists with Sam Rainsy's banned opposition party this year. The party's last leader remains under house arrest on treason charges.

Sam Rainsy fled to France four years ago following a conviction for criminal defamation. He also faces a five-year prison sentence in a separate case.

He denies wrongdoing and says the charges were politically motivated.

Dozens of other opposition activists who fled Cambodia fearing arrest have vowed to return in support of Sam Rainsy.

On Monday, Malaysian authorities detained two Cambodian activists waiting to board a flight to Thailand. Malaysia withdrew an order to deport them to Cambodia after an appeal, a rights group said.

The CNRP's remaining leader in Cambodia, Kem Sokha, was charged with treason in 2017 and months later the Supreme Court dissolved the opposition party.

Hun Sen's party went on to win every seat in parliament in elections held in 2018.

Cambodia's ambassador to Indonesia on Wednesday had a face-to-face confrontation with a top opposition politician who was holding a news conference at a hotel in Jakarta, Indonesia's capital, to explain the returnees' plans.

Ambassador Hor Nambora barged into the news conference and spoke in front of the assembled journalists as Cambodia National Rescue Party vice president Mu Sochua sat waiting to speak. The envoy described the opposition politicians as fugitives and criminals, and accused Mu Sochua of trying to mislead Indonesian immigration authorities into thinking she was only a tourist by using her American passport. She holds dual Cambodian and US citizenship. 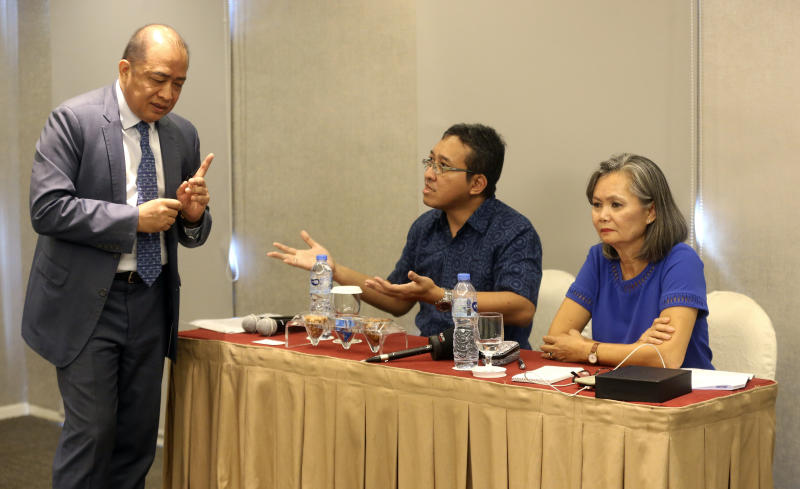 Hor Nambora did not further disturb the proceedings, though he paced at the front of the conference room as Mu Sochua spoke. As he left, he apologised to journalists for any disruption, but reiterated that Cambodian courts had ruled against the opposition politicians.

“We are risking our lives, we will go to Cambodia empty-handed with bare hands,” Mu Sochua told the news conference, which was also attended by Indonesian activists. “Returning home for democracy in Cambodia, it's not a revolution, it's not a coup d'etat.”

“We have asked neighboring countries to permit us safe passage to Cambodia and to have free movement when we are in Cambodia,” she said. “We have been asking governments all around the world to witness our return to our nation, our homeland, with good intentions and totally transparent.”

After the news conference, the Cambodian Embassy in Jakarta issued a press release saying that Mu Sochua was a fugitive from the law because a Cambodian court on Oct 2 had issued an arrest warrant against her for her allegedly seeking to overthrow a legally elected government.

“It is unfortunate that Indonesia, a fellow member state of Asean, allows Ms Mu Sochua to enter in Indonesia despite of her arrest warrant and conduct anti Cambodian activities in Jakarta,” it said.

The statement said the embassy “requests Indonesian authorities to arrest Ms. Mu Sochua and deport her to Cambodia immediately in the true spirit of Asean.”