Analysis: A split opposition makes change to the constitution difficult

Constitutional amendment is one of the 12 priorities detailed in the policy statement which the Prayut Chan-o-cha administration declared before parliament.

The Democrat Party even insisted on a charter change as a precondition for joining the Palang Pracharath Party-led (PPRP) coalition.

The issue has become a thorn in the side of the government, now the House is moving to appoint a special panel to study charter change.

Political observers believe the Democrats are serious about pushing the issue, after its MPs this week backed their ex-leader Abhisit Vejjajiva to sit on the committee under its quota, even though Mr Abhisit has resigned as an MP.

It is widely speculated that Mr Abhisit -- a vocal advocate of changes to the 2017 charter -- will be nominated as the chairman. Reacting to the speculation, PPRP MP for Nakhon Sawan, Weerakorn Khamprakob, raised objections to Mr Abhisit heading the House committee.

Suthin Khlangsaeng, the opposition chief whip and Pheu Thai Party MP for Maha Sarakham, has voiced support for Mr Abhisit, saying the former Democrat leader is the most qualified candidate for the post, when compared with the PPRP's proposed candidates.

He said even though opposition parties have yet to reach a resolution, they seem to agree that Mr Abhisit is a suitable choice given his stance on charter amendment.

As a representative of the Democrat Party, he is expected to work as a go-between for the government and the opposition as well, said Mr Suthin.

"No matter how hard the PPRP objects [to charter change], the party can't resist public demands for changes and the Democrat's commitment to the issue," he said.

According to Mr Suthin, the Democrat Party's decision to name Mr Abhisit as its representative, along with Democrat chief adviser Chuan Leekpai's stance against the 2017 charter, indicate how seriously the party will pursue charter amendments.

Mr Chuan recently told a public forum that he did not vote for the 2017 charter at the referendum.

Mr Abhisit told the Bangkok Post on Wednesday that he has yet to decide whether to join the House committee.

"If the core party [the PPRP] is opposed to charter amendments, I think there is no point in me working on the committee," he said. 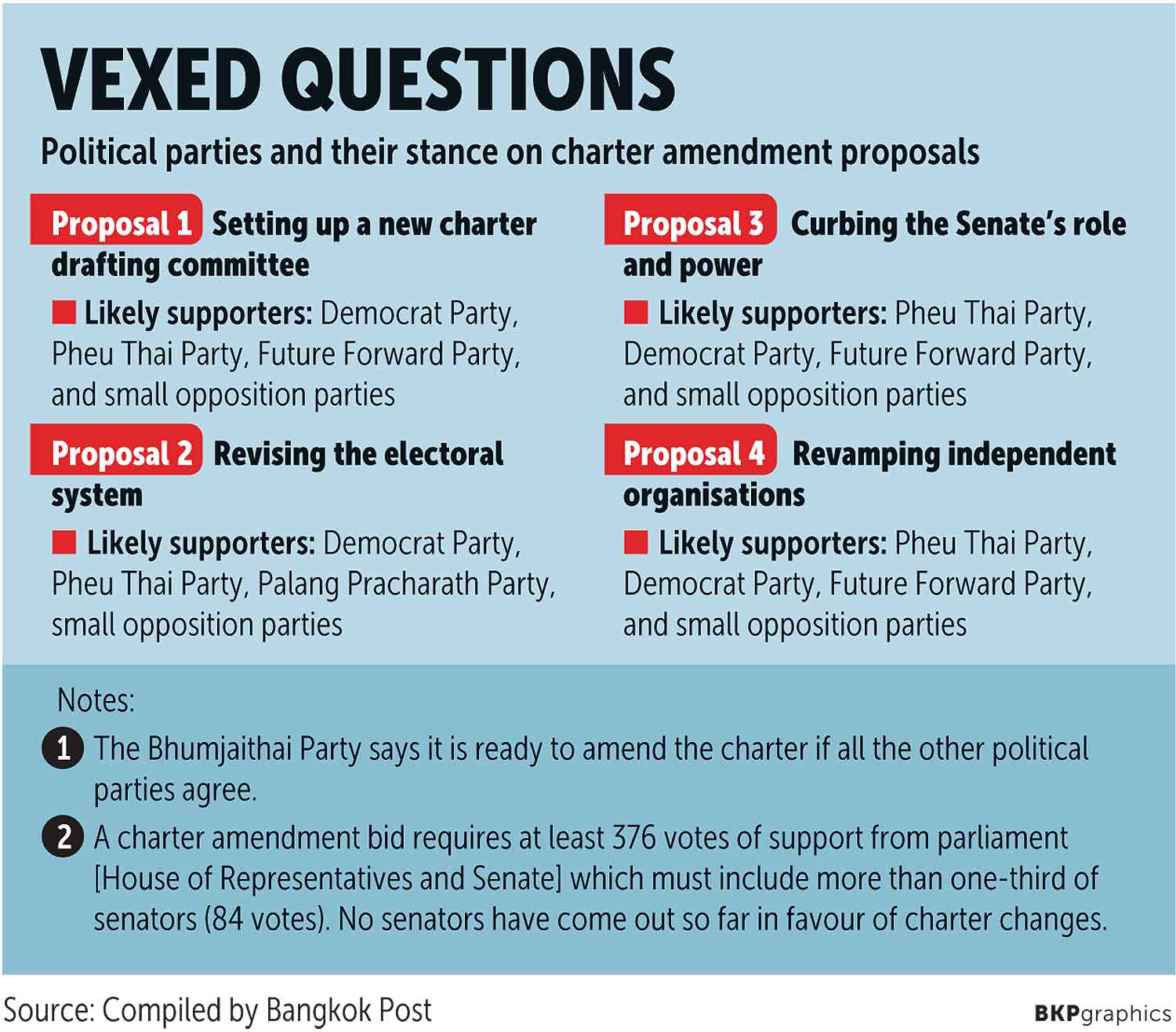 Meanwhile, Prime Minister Prayut Chan-o-cha on Wednesday distanced himself from the debate. "It's an affair of the House which I can't intervene in. The committee has to work for the public's interest -- and it's not a one-day job," he said.

Jade Donavanik, former adviser to the Constitution Drafting Committee (CDC), said signs of objection from some government MPs and opposition parties could make the charter rewrite a difficult task.

He said that without support from government MPs and the Senate, the bid looks set to fail. He said the Bhumjaithai Party, another coalition partner, is not committed to amending the charter.

Mr Jade said flaws in the charter should be listed for revision while the "good parts" -- including chapters on the state, the monarchy, and civil liberties -- should not be touched.

According to Mr Jade, elements involving the Senate and the election system will be fiercely debated.

Senator Somchai Sawaengkarn told the Bangkok Post that he is opposed to efforts to revise Section 256 of the charter, which says a charter amendment requires the support of at least one-third all 250 senators, or 84.

Mr Somchai likened Section 256 to a key to a house, saying if the key was handed over to political parties, they could then do anything to the charter.

"A referendum is needed if parties want to make it easier to pursue charter changes," he said.