Analysis: Charter court has power to break party up in crunch Nov 20 ruling

All eyes will be on the Constitutional Court on Nov 20 when it delivers a ruling which could make or break the embattled Future Forward Party (FFP) leader Thanathorn Juangroongruangkit in a media-shareholding case.

The party and its leader face a slew of legal cases that place their political future in jeopardy.

In the worst-case scenario, the party, which has 80 MPs, could be dissolved and its 24 executives banned from politics.

If the court rules against him on Nov 20, this may cause "a domino effect" that could culminate in the party being disbanded, observers say.

The Election Commission (EC) alleges Mr Thanathorn held shares in V-Luck Media Co, a media firm, when he registered as an MP candidate in early February, in violation of Section 98 (3) of the charter, which prohibits owners and shareholders of media or publishing firms from applying to become MPs.

The case was later handed to the court which issued an order suspending Mr Thanathorn from his MP duties on May 23, pending a ruling.

The FFP and Mr Thanathorn have been in a serious predicament with several legal cases brought against them during the past few months. Some even say the party has now been in a downward spiral since its inception in 2018.

An internal rift has also emerged in the party as 120 former election candidates and party members resigned en masse, accusing Mr Thanathorn of ignoring unsuccessful candidates and failing to keep promises to give them political jobs.

A few of the party MPs also refused to toe the party line as they voted in favour of government-sponsored bills -- an executive decree to transfer army units to the royal command and the 3.2-trillion-baht spending plan for the 2020 fiscal year.

But there are three cases which could lead to the dissolution of the FFP. One involves donations made by Mr Thanathorn and his wife, Rawiphan. The FFP leader donated 10 million baht to his party and his wife contributed 7.2 million baht.

Activist Srisuwan Janya has asked the EC to rule whether the couple are considered a single entity under the law. If so, their combined donations of 17.2 million baht would be in violation of Section 66 of the law on political parties, which caps donations by an individual to a party at 10 million baht, he said.

Mr Srisuwan has also asked the EC to investigate whether Mr Thanathorn broke the same law by granting a loan of more than 100 million baht to his party. The charter court also accepted a petition filed by lawyer Natthaporn Toprayoon, who accused Mr Thanathorn and his party executives of trying to bring an end to the monarchy.

Mr Thanathorn yesterday brushed aside criticism his party could be disbanded if the court rules he is no longer qualified to be an MP due to the media-shareholding case. He said the media shareholding is not related to the dissolution of the party. "Some people who have come out to talk about this matter have a political agenda. They don't want many people to work with my party,'' Mr Thanathorn said.

FFP secretary-general, Piyabutr Saengkanokkul, said it was surprising the party has so many legal cases brought against it, despite the party not being in power.

"I want to ask if everyone really feels the party broke the law or whether this is because the party's approach has upset those in power," Mr Piyabutr said. In the media-shareholding case against Mr Thanathorn, Mr Piyabutr said the constitution's intention is to prevent MPs or cabinet ministers from wielding influence on media.

It is necessary to consider whether the company in which Mr Thanathorn held shares was actually a media company, and whether the shareholding was so considerable that it could influence the media. V-Luck Media Co was not an media outlet, but only a company making publications, Mr Piyabutr said, adding the company was already closed.

Yutthaporn Isarachai, a political scientist from Sukhothai Thammathirat Open University, said that if the court rules against Mr Thanathorn on Nov 20, this could set off a chain reaction leading to the FFP being disbanded.

In the event of the party's dissolution, its MPs still have 60 days to move to new parties and retain their MP status as stipulated by Section 101 of the constitution, Mr Yutthaporn said. But if the FFP manages to go through this rough patch and survive, it will likely grow into a major party, matching or even surpassing the Pheu Thai Party, he said.

Mr Yutthaporn likened the FFP to a hot-headed youth who wants quick change in politics. "The party needs to understand there are many conservatives in Thai politics... The FFP needs to adjust its approach. It has to be more calm and level-headed. One has to wait patiently for change," he said. 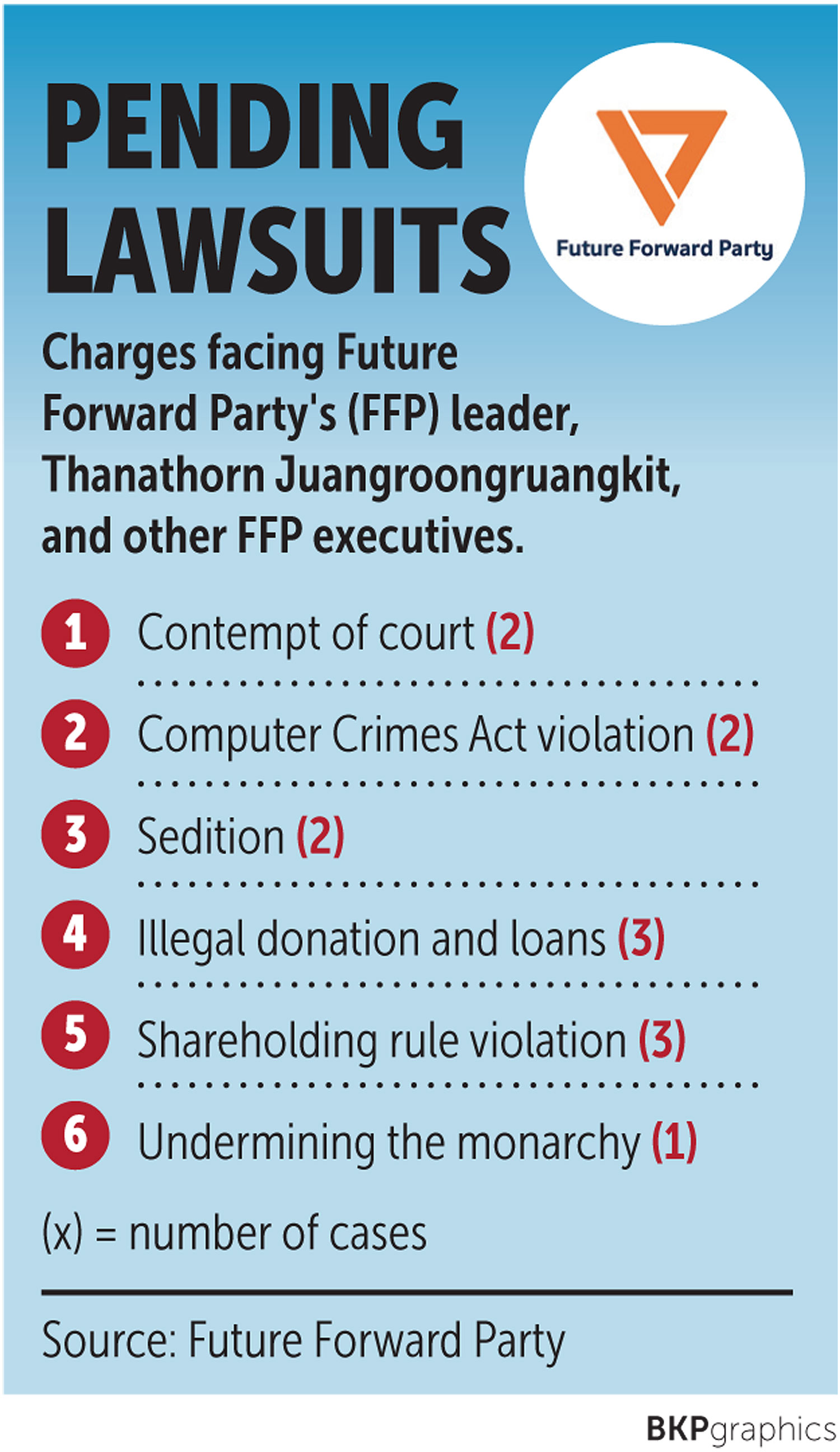