Pareena Kraikupt, a Palang Pracharath MP for Ratchaburi province, during the debate after Prime Minister Prayut Chan-o-cha delivered his policy statement to Parliament on July 26. (Photo by Pattarapong Chatpattarasill)

A Palang Pracharath MP for Ratchaburi province may lose her chicken farm after authorities found it is located in a land reform area and reserved forest.

Pareena Kraikupt, the most outspoken critic of the Future Forward party, declared assets totalling 169.7 million baht upon becoming an MP this year.

In her asset declaration form, she reported owning 76 land plots, 58 of which were later found to be so-called Por Bor Tor 5 land or "no man's land".

The land in the area was formerly reserve forests, but much of it was declared a land reform zone in 2011 by the Agricultural Land Reform Office (Alro) although it has yet to be divided into plots and allocated to needy farmers.

Today, most of her 1,706 rai was believed to be Alro land while some might remain part of reserve forests.

She said it was government land and the Royal Forest Department allowed people to farm on it. Her family duly paid the "grass-flower tax" or local tax on the Por Bor Tor 5 land, she added.

As well, Alro was also checking the nominees holding part of the land, he added.

An official at the Ratchaburi Alro office told Thai media if the land was in fact Alro land, Mr Tawee was not qualified to occupy it. The land will then be seized under the junta's order issued under Section 44, which requires that Alro land be taken away from large owners.

Mr Tawee, however, believes the trouble faced by the family is politically motivated.

"It happened because she played hardball. She dared to mention two fugitive prime ministers who now live happily abroad, leaving their henchmen to rot in jail. She has the courage and now she is paying [for it]," he said, apparently referring to the Shinawatras.

Mr Tawee asked for justice for his daughter. "We all know who filed the petition. My daughter did not encroach on any land. She's a real farmer, not a fake one."

He added he bought the land from farmers who had already grown sugarcane, tapioca and pineapples on it.

The probe into Ms Pareena's land ownership came less than a week after she did the same to Somporn Juangroongruangkit, mother of Future Forward leader Thanathorn.

The 43-year-old MP questioned the ownership of Mrs Somporn's land in Ratchaburi, saying she acted on local people's complaints.

The people want to create a 1,050-rai community forest and some of it was believed to be Mr Somporn's land. Mrs Somporn later said she was willing to donate the land to the community. 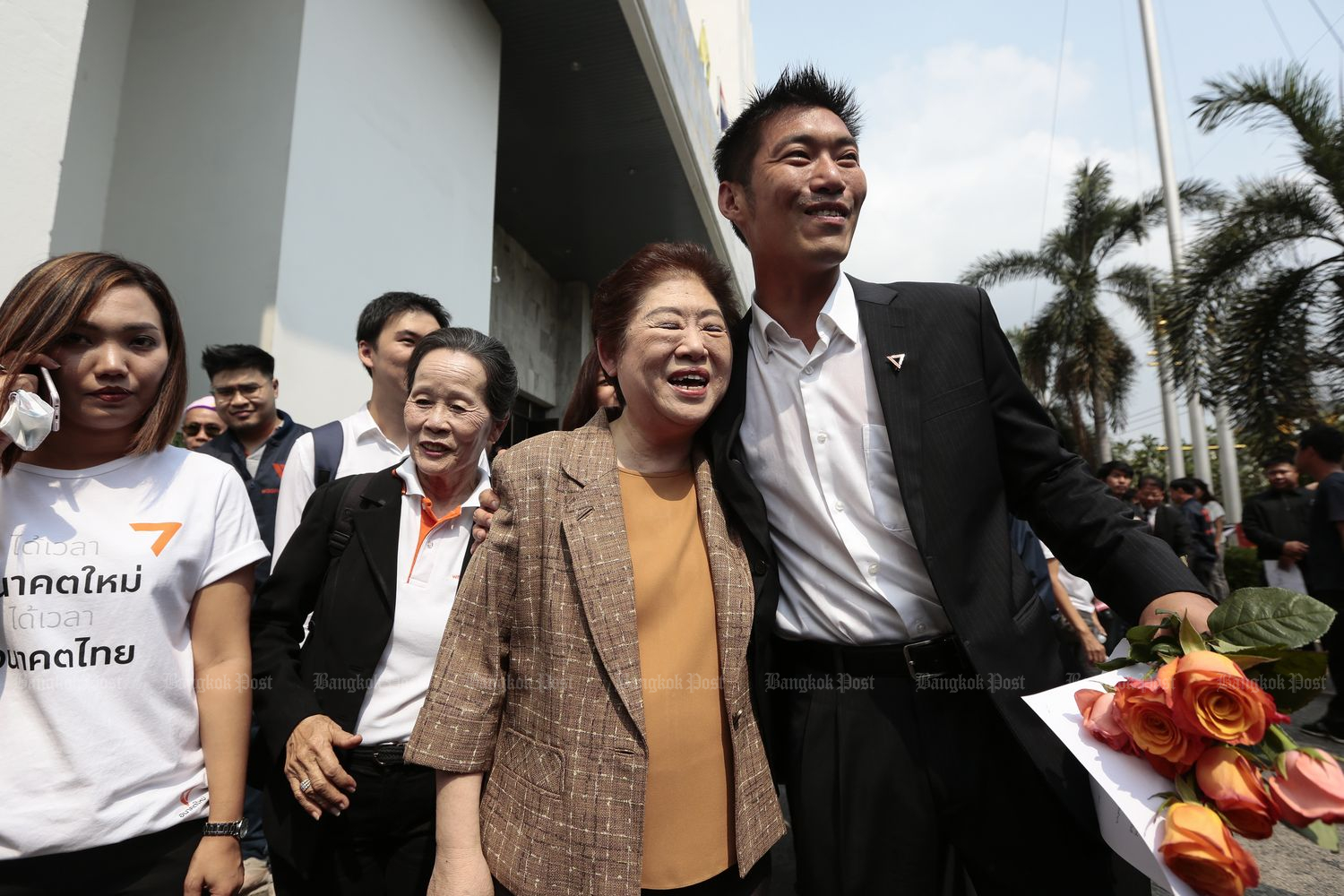 Somporn Juangroongruangkit, arrives at the Office of the Attorney's General to give her son Thanathorn moral support in a case in which he was accused of breaking the computer crime law on Feb 27. (Photo by Patipat Janthong)

He said Mrs Somporn had bought it as a large plot, probably from a broker who had bought several small plots from people in the area.

The deal, therefore, involved different kinds of deeds and documents, and some of them are Por Bor Tor 5 land, he said.

Mr Attapol said in both cases, the department would sort out the papers and check the demarcation of the plots before taking further action.

Decades ago, there was not enough farmland and people encroached on empty land or forests to make a living. To keep track, authorities required them to pay minimal local tax — unofficially called "grass-flower tax" — as proof of their occupational purposes. This tax form is called Por Bor Tor 5 and the name has since been used to refer to this type of land.

However, such land does not fall into the two categories of land with proper documents — title deeds or occupation rights documents. As a result, it cannot be legally bought or sold. While it may change hands, technically only the occupation rights are transferred, usually done by changing the names of the payer of the local tax. No other fee or tax is charged.

Much of this type of land has since been declared land reform areas and proper ownership documents issued to occupiers.