Thailand could see street protests again if establishment forces continue to resist democratic change, according to the leader of Future Forward, the nation’s most high-profile opposition party.

A flash-point could come if the party is dissolved by judges next month, Thanathorn Juangroongruangkit signalled in a speech at the Foreign Correspondents' Club of Thailand (FCCT) in Bangkok on Monday evening. Future Forward and some of its officials face more than two dozen cases, stemming from the police, the attorney general, the Constitutional Court and the Election Commission, he said.

“The establishment are pushing people out,” he said. “They seem certain they could contain it and control it. But many think otherwise. I’m not convinced. I think this is a very dangerous gamble.”

Mr Thanathorn, a critic of the establishment’s grip on power, opposes military influence in government in a country with a history of coups. He was barred from parliament in a court ruling last month for breaching media shareholding rules, accusations he said were politically motivated.

"They consistently use fake news and misinformation to discredit opposition. They are branding us as traitors, branding us as anti-monarchy, installing hatred that divides the people of this country," Thanathorn told reporters in his strongest comments since the court ruling.

"We can see clearly the effort to dissolve our party," he said.

Mr Thanathorn said he has no control over the timing of protests, while adding the “anger of the people is real” and that an anti-government demonstration expected next month -- in the form of a run -- will be a test of sentiment toward the ruling coalition.

In a question posed after the speech, Colonel Artcha Boongrapu, a member of the Committee to Return Happiness to the People at the Royal Armed Forces HQ, said many politicians were hypocritical troublemakers. "Come in and solve problems, not make more problems," he intoned.

On Tuesday, Thanakorn Wangboonkongchana, a spokesman for the coalition’s biggest party, Palang Pracharath, said that he disagreed with Mr Thanathorn’s comments.

“He should respect the justice system. Nobody knows how these legal cases will play out,” Mr Thanakorn said. “The majority of people don’t want to see street protests again. They don’t want to see chaos and disruption in the country.”

Future Forward emerged as the third-largest party and became part of an opposition bloc that controls almost half the lower house of parliament.

The deeply divided parliament, and the government’s slim majority, have put the spotlight on political risk in Thailand, where officials are straining to revive a struggling economy.

The administration managed to get the annual budget bill through an initial parliamentary vote in October, with more due in January. Analysts remain split on whether the coalition will survive future tests.

Mr Thanathorn said he doesn’t support violence. He also said tension is rising and that a “storm” might be coming.

“I look at my role as a chain breaker,” he said. “To break the chain that’s preventing us from achieving further.” 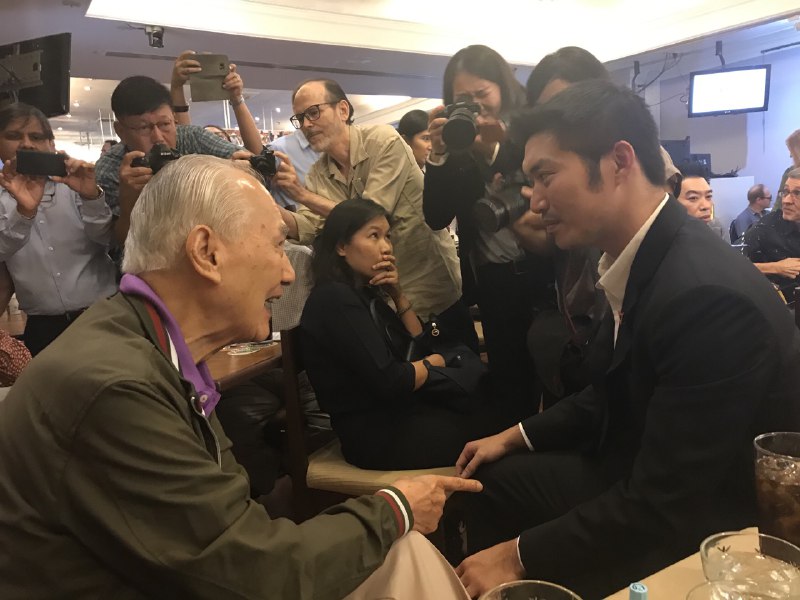 Making a surprise appearance at the event was Anand Panyarachun, the architect of the 1997 ‘People’s Constitution’ and the former prime minister who helped calm one of Thailand’s previous political struggles between the military establishment and those calling for democratic reforms around the ‘Black May’ incident of 1992.

Mr Anand presented Mr Thanathorn with a copy of his biography, written by former FCCT president Dominic Faulder, and signed it with the words: “I hope you learn something from this book. Good luck!” 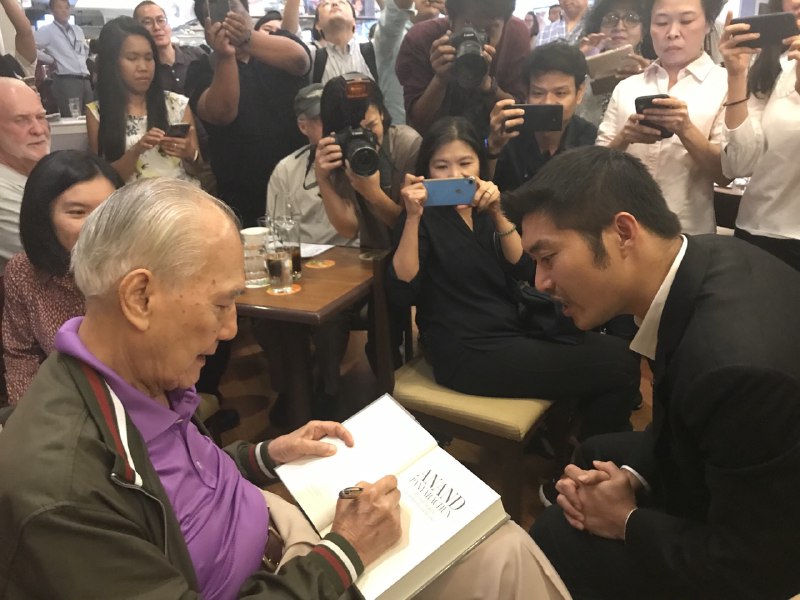 Former Prime Minister Anand Panyarachun signs a copy of his biography for Thanathorn Juangroongruangkit at the Foreign Correspondents' Club of Thailand on Monday. (Photo by Lee Poston/FCCT)