Prawit confirms run against Prayut can go ahead
Thailand
Politics

Prawit confirms run against Prayut can go ahead

Opponents and supporters of Prime Minister Prayut Chan-o-cha will be out in force in Bangkok on Sunday, with a run against him at Railway Park in Chatuchak, and a walk of support in Lumpini Park. (Photo by Chanat Katanyu)

"The government has given it the go-ahead and will not ban it," Gen Prawit said, but warned the organisers must stay within the law and not use the event to stir up political conflict. 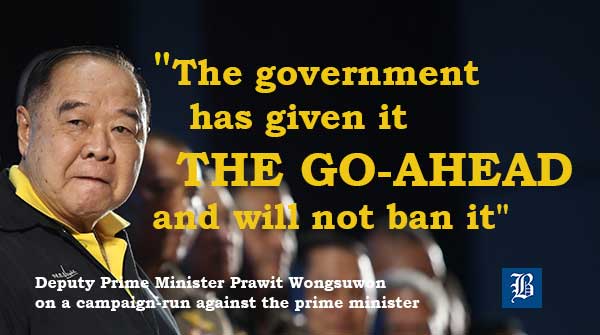 The run against the prime minister will be held at Suan Rot Fai, officially known as Wachirabenchathat Park, from 5am-9am on Sunday. Supporters of the prime minister plan a rival event that same day - a campaign-walk at Lumpini Park for Gen Prayut.

"Do not cheer him in front of the tube. We will be at Lumpini Park on Jan 12," a promotional post said on the Facebook account @CheerLung.

Both camps claim overwhelming support for their events, although Gen Prayut on Monday seemed less than keen about both activities, saying the country needed to move forward.

Future Forward leader Thanathorn Juangroongruangkit and party spokeswoman Pannika Wanich will be among the runners calling for Gen Prayut's removal, and the deputy prime minister did not have any objection to this.

Gen Prawit, however, made it clear that he would not be taking part in the walk for the prime minister.

"Me? I can barely walk," he said when asked.

Results of a Nida poll by the National Institute for Development Administration released on Sunday showed the run against Gen Prayut was more popular that the pro-prime minister meander.