Dissolution of FFP 'will have dire outcome'
Thailand
Politics

Dissolution of FFP 'will have dire outcome'

Future Forward Party (FFP) secretary-general Piyabutr Saengkanokkul has warned of grim consequences if the party is disbanded over allegations related to the so-called Illuminati group.

The Constitutional Court will on Tuesday rule whether the party should be disbanded over allegations that it tried to overthrow the constitutional monarchy system.

Natthaporn Toprayoon, a lawyer and former adviser to the chief ombudsman, filed a case with the court early last year asking for it to dissolve the FFP for violating Section 49 of the charter, which prohibits actions that undermine the monarchy.

He also cited several actions including the party's regulations and speeches and lectures delivered by senior party figures. 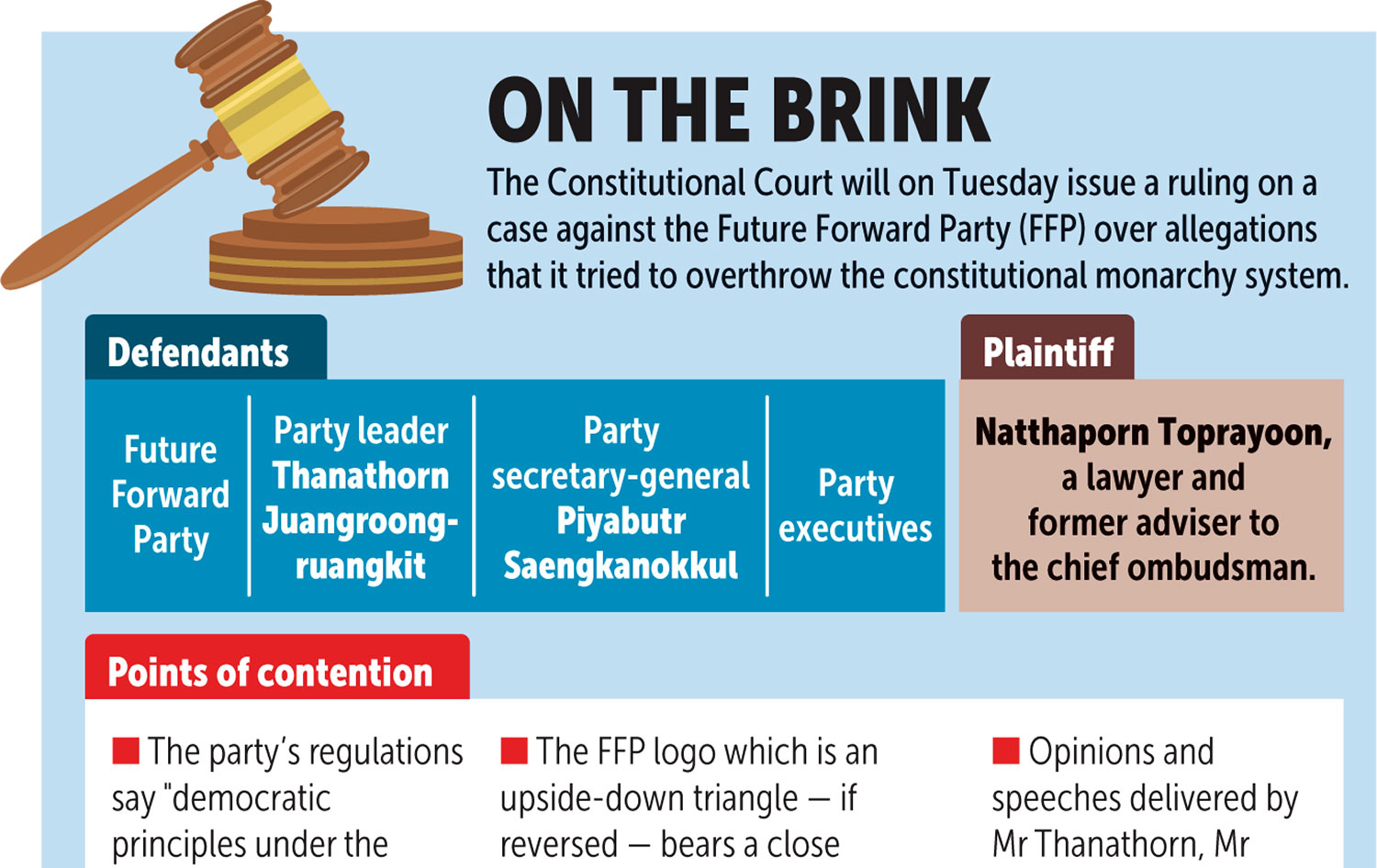 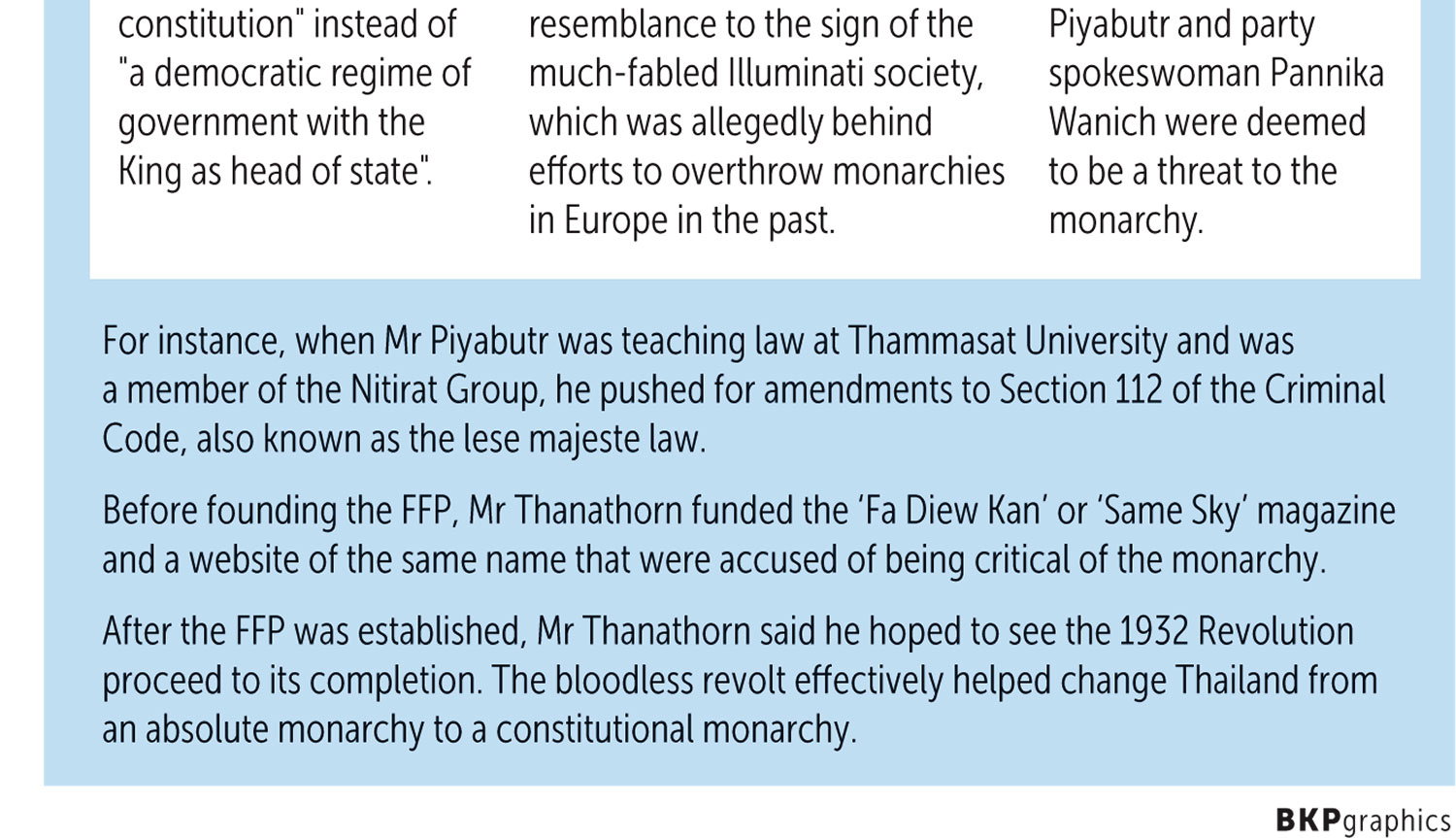 In a Facebook post yesterday, Mr Piyabutr said that he, Mr Thanathorn and other party executives will continue their political activities even if the party is dissolved and its executives banned from politics.

"If the court rules to disband the party, I don't think it will be a disaster because we will press ahead with our political roles. But there will be serious consequences for society, Mr Piyabutr said.

The disbandment of the FFP is tantamount to dashing Thais' hopes and dreams of better politics, he said, adding that this will lead to deeper divisions between the old and young or "a clash of generations".

"Most importantly, the monarchy is being used once again as a tool to destroy political opponents," Mr Piyabutr said.

However, political scientists argued that the Constitutional Court's ruling on the case may not spell disaster as is expected by its secretary-general.

Yuttaporn Issarachai, a political scientist at Sukhothai Thammathirat Open University, said the development of Thai politics does not rely only on the FFP, but factors in civil society groups or new parties like the FFP.

"We can't assume that the FFP is equal to the development of Thai politics and the dissolution of this party will lead to a hopeless political situation," he said.

As for the clash of generations, Assoc Prof Yuttaporn dismissed Mr Piyabutr's assumption that FFP supporters are the new generation and its opponents are the old generation.

"In fact, young people have conservative and liberal views, as do older people. The dissolution of the FFP may cause resentment among its supporters, but will not intensify. Besides, the polarisation of political ideologies makes it more difficult to trigger mass rallies," he said.

The politics lecturer also said the court's ruling will depend on evidence and the law, though its interpretation may vary, which might draw criticism.

Meanwhile, Phichai Ratnatilaka Na Bhuket, a political scientist at the National Institute of Development Administration, said that if the court decides to dissolve the party, it will breed resentment, especially among FFP supporters.

"Dissolving the party could provoke anger, but if the FFP creates a new political party, young supporters can hold out hope," he said, pointing out that the clash of generations is already entrenched in political ideology.

He also said Mr Piyabutr's claim that the monarchy is used as a tool to defeat opponents is an over-interpretation.