The Future Forward Party (FFP) is likely to be spared by the Constitutional Court on Tuesday as the alleged offences of its members do not warrant its disbandment, according to law scholars.

The court is due to hand down its ruling on whether the party attempted to undermine the monarchy,

Today's ruling involves allegations made by Natthaporn Toprayoon, a lawyer and former adviser to the chief ombudsman, who sought the FFP's dissolution last year for violating Section 49 of the constitution which prohibits actions that undermine the monarchy.

In his petition, Mr Natthaporn cited FFP actions including regulations, speeches and lectures made by senior party figures to substantiate his accusations against the party, its leader Thanathorn Juangroongruangkit, secretary-general Piyabutr Saengkanokkul and executives.

Another allegation made by Mr Natthaporn concerned the FFP logo. He said if it is reversed, it bears a close resemblance to the sign of the much-fabled Illuminati society, which was allegedly behind efforts to overthrow European monarchies in the past.

The court rejected the FFP's request for a full inquiry into the case, saying there was sufficient evidence to rule without holding an inquiry under Section 58(1) of the court's Procedure Act.

Jade Donavanik, former adviser of the Constitution Drafting Committee, said on Monday: "There is only a slim chance the party will be dissolved because the charter does not allow for the disbanding of a political party based on the acts of individuals." 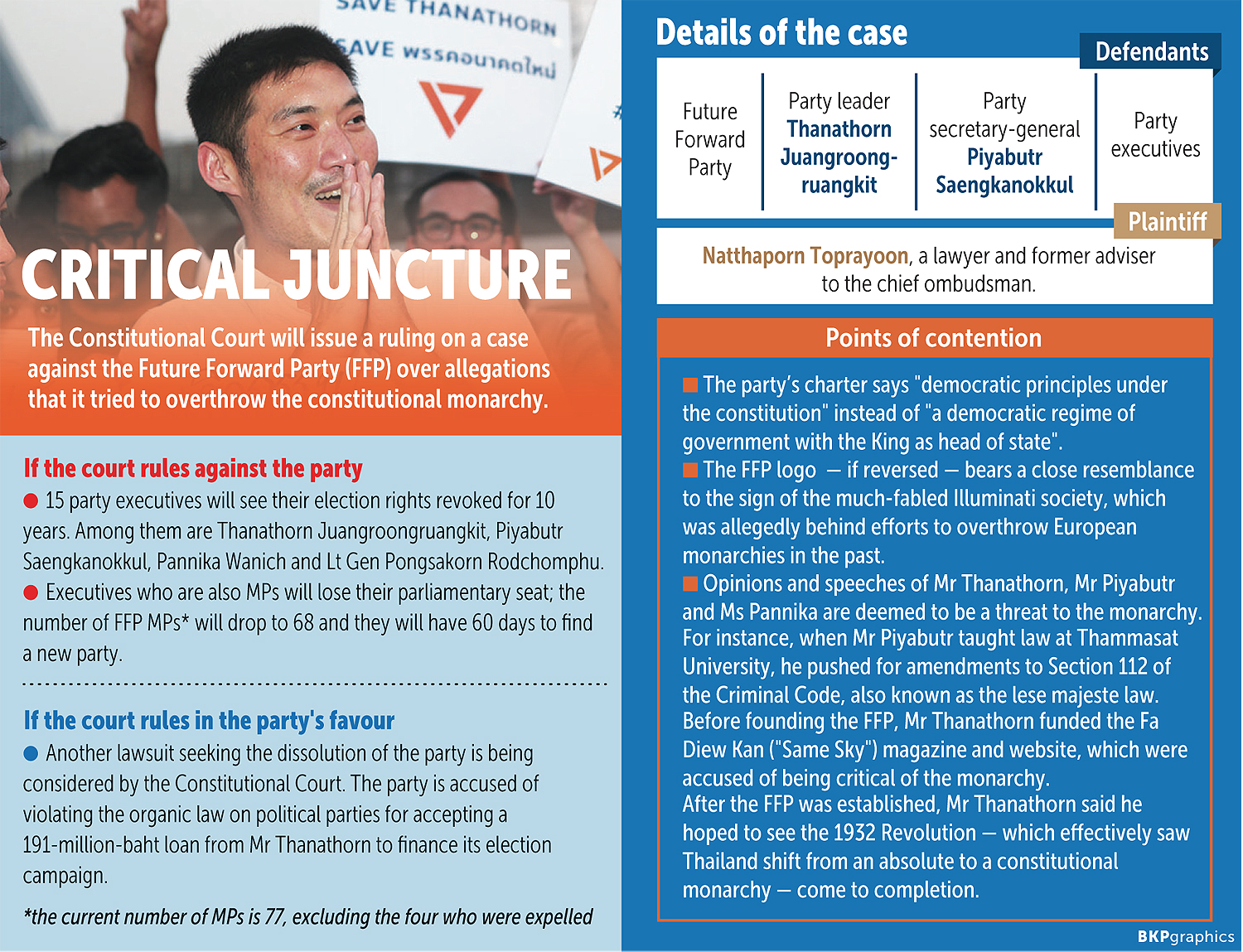 While some of the FFP's key figures stand accused of violating Section 49, there must be evidence to prove that they have done so on behalf of the party.

Stithorn Thananithichote, director of the Research and Development Office at King Prajadhipok's Institute, agreed that the FFP is unlikely to be disbanded.

Mr Stithorn said Section 49 does not stipulate automatic dissolution if a political party is found to have undermined the constitutional monarchy and Section 92, on which the petition is based, allows only the Election Commission (EC) to seek a dissolution.

According to the legal scholar, if evidence establishes that key FFP figures have engaged in acts deemed to undermine the constitutional monarchy on behalf of the party, the court may order the EC to initiate a probe.

Nevertheless, even if the court rules in the FFP's favour on Tuesday, the future of the opposition party remains grim.

Pending in the court is a case involving loans worth 191 million baht the party obtained from Mr Thanathorn.

These allegations, which were brought by the EC, also provide grounds for dissolution.

"The EC is under pressure after 18 other political parties were also accused of violating the law on borrowing money," Mr Stithorn said.

The issue came to public attention when Somchai Srisutthiyakorn, a former EC member, recently posted information about the loan records on Facebook.

Meanwhile, barricades have been put up at the Rajaburi Direkriddhi Building where the Constitutional Court is located as part of security measures and it is reported that about 80 police will be deployed on Tuesday to keep order. The court is inside the compound of the Government Complex on Chaeng Watthana Road.

The Office of the Constitutional Court has has also asked reporters to conduct media interviews outside the compound.