Supporters of the Future Forward Party celebrate after the Constitutional Court acquitted the party of attempting to overthrow the constitutional monarchy — a charge which could have lead to its disbandment if found guilty. Wichan Charoenkiatpakul

Despite being acquitted by the Constitutional Court of seeking to overthrow the constitutional monarchy, the Future Forward Party (FFP) is not out of the woods yet, with a case involving a multi-million-baht loan from its leader Thanathorn Juangroongruangkit pending in court.

The court on Tuesday ruled to reject a petition submitted by Natthaporn Toprayoon, a lawyer and former adviser to the chief state ombudsman, seeking the disbandment of the FFP for violating Section 49 of the constitution. 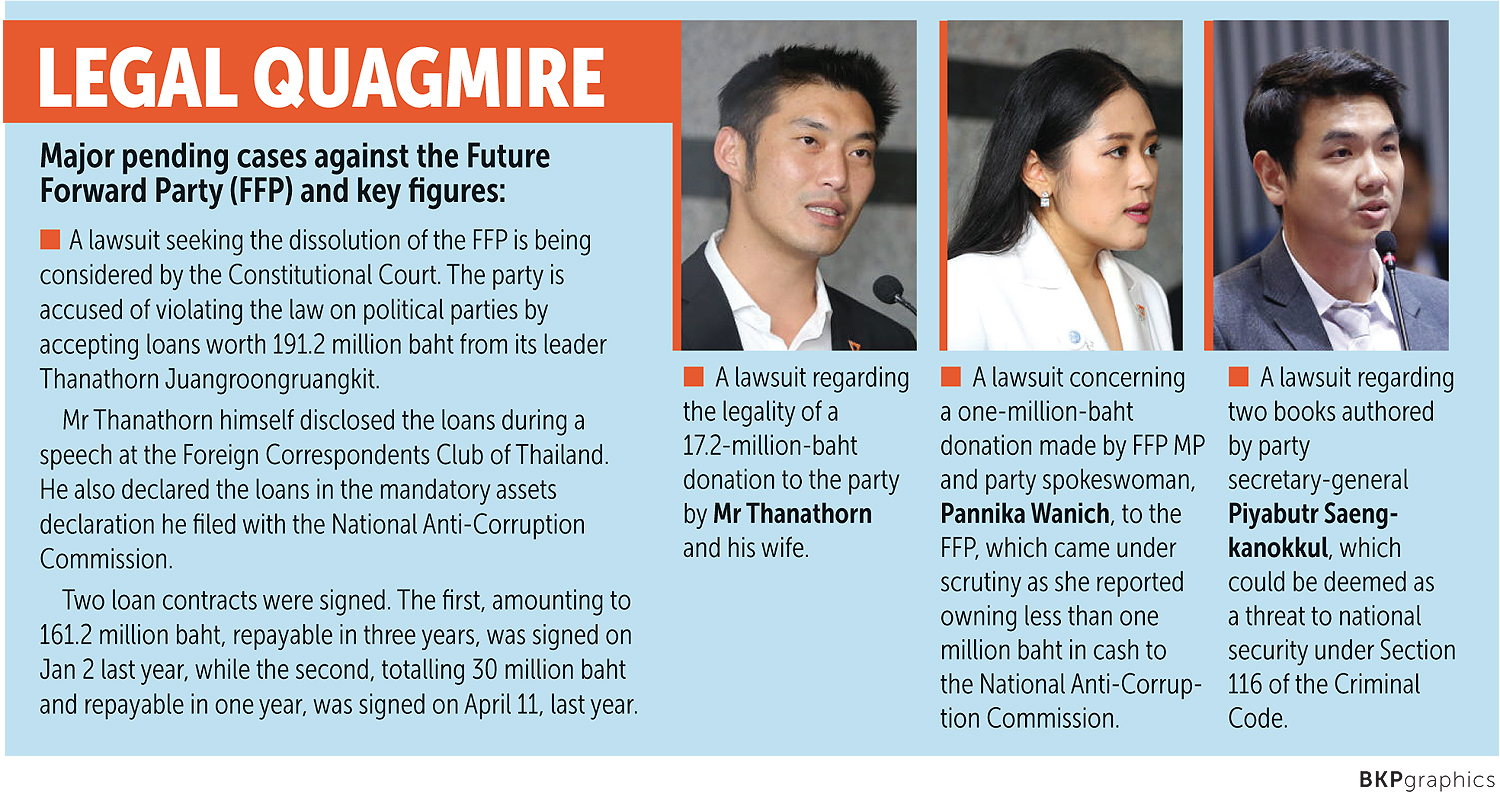 He cited the party's regulations, as well as speeches and lectures made by its senior figures.

The court, however, found that party regulations, press interviews and speeches did not undermine the monarchy.

A total of 150 police officers were deployed to beef up security at the court for the ruling, but Mr Thanathorn and other party members did not appear in court. They followed the ruling from party headquarters on the eighth floor of the Thai Summit Building.

Speaking after the ruling, Mr Piyabutr said the case should never have been filed. The FFP had no intention of undermining the monarchy, he said, but instead was trying to protect the constitutional monarchy with the King as head of state.

He blamed military coups, not political parties like the FFP, for undermining the constitutional monarchy.

Mr Piyabutr said the party will table a motion in the House of Representatives to set up a panel to study measures to prevent military coups.

Although the petition seeking the party's disbandment was thrown out, there was still a movement to destroy the FFP, he said.

The party was ready to fight on, said Mr Piyabtur, with its fate once again in the balance in the looming case involving the 191.2-million-baht loan.

"We believe we are innocent because the law does not forbid us from borrowing money. Loans are not income. We have paid off some money, which we used for political activities, not business," he said.

"In particular, the loan [of 191.2 million baht] was given by the FFP leader to his own party. This would allow its leader to dominate the party's affairs. Therefore, the money is from an illegitimate source, in violation of Section 72 of the law," Mr Srisuwan said.

Section 72 prohibits parties and their executives from accepting cash donations, assets or other benefits when they know or suspect the money comes from an illegitimate source.

On Dec 25 last year, the Constitutional Court accepted the Election Commission's request to consider disbanding the FFP for allegedly violating the organic law on political parties by accepting the loan from Mr Thanathorn to finance its election campaign.

The EC concluded the party may have violated Section 72. Poll commissioners also consider the loan "illegitimate" under Sections 62 and 66 of the law on political parties, according to EC sources.

Section 66 bars any individual from donating money or assets to parties in excess of 10 million baht within a one-year period.