Prim Pooncharoen of the Palang Pracharath Party speaks as her party colleague, Chaiwut Thanakhamanusorn, looks on in a press conference in Parliament on Thursday defending the former's vote more than once during the budget debate session.

The Palang Pracharath Party (PPRP) on Thursday defended the proxy voting by its MPs after a video clip showed one of its lawmakers inserting more than one card during the budget bill vote.

PPRP secretary-general Sonthirat Sonthijirawong claimed there were problems with the voting devices equipped on all seats on Jan 10-11 when MPs voted on the 3.2-trillion-baht budget bill. But he said he did not know the party members were among MPs who voted on behalf of absent colleagues.

PPRP was the latest coalition party under fire for the violating voting rules, which prohibit a member from using cards that are not his or hers to vote.

A video clip of Channel 7 showed a female PPRP MP inserted at least three cards into the machine in front of her during the vote. The clip also showed another man doing the same.

The issue of proxy voting was brought up by former Democrat MP Nipit Intarasombat, who revealed on Monday records showed Chalong Therdwirapong and Natee Ratchakitprakan of Bhumjaithai voted even though they were not present.

Prim Pooncharoen, a PPRP representative for Samut Prakan, admitted she was the person in the Channel 7 clip but defended her action. She said she had been requested by Tawirat Rattanaseth, an MP for Nakhon Ratchasima from the same party, because he was unable to go to his seat during the vote.

Chaiwut Thanakhamanusorn, secretary-general of the coalition whip, said the PPRP had no policy of proxy voting and blamed it on the insufficient number of devices. 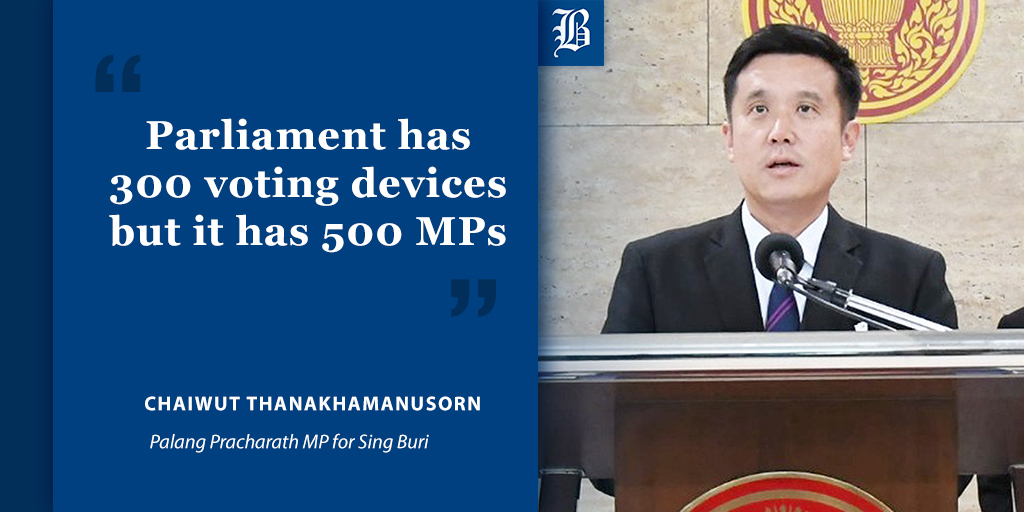 "Parliament has 300 voting devices but it has 500 MPs," said the Sing Buri representative, adding it led to a problem showing MPs inserted more than one voting card into the same device.

A parliamentary source explained MPs had been using the Chandra room intended for senators since their own Suriyan chamber had yet to be completed. The Chandra room has a capacity of 300 while Suriyan supports 500.

The issue will be discussed at the PPRP's meeting on Friday and party leader Uttama Savanayana said the party would find out what happened first before coming up with measures.

The Senate passed the bill on Tuesday after the House passed it on Jan 11 in a 253-0 vote, with 196 abstentions and one uncast vote.

Had it not been for the proxy voting issue, the bill would come into effect soon so planned investments could proceed. The 2020 budget bill has already been long overdue given the exceptionally long time it took to endorse election results and form the government.

Civil servant salaries and most fixed expenses won't be affected by the delay since the Finance Ministry has planned to tap treasury reserves to cover the costs until the budget can be drawn.

Prime Minister Prayut Chan-o-cha said on Thursday he was looking for solutions to the problem.

Some Opposition MPs have challenged the validity of the bill. They pointed out during the Yingluck Shinawatra government, her 2-trillion-baht infrastructure borrowing bill was scrapped by the Constitutional Court which cited as a reason an illegitimate act of proxy voting by a Pheu Thai MP.

Deputy Prime Minister Wissanu Krea-ngam said proxy voting was wrong and the Constitutional Court could be asked to rule on the validity of the bill. He also said passing the bill as a government decree was another option albeit an inaproporaite one if the case was already sent to the court for a ruling.