Sutin bullish despite dissolution of FFP

Despite the censure debate against Prime Minister Prayut Chan-o-cha and five cabinet ministers kicking off today without key speakers from the now-dissolved Future Forward Party, the session will be no less interesting, according to opposition chief whip Sutin Klungsang.

Mr Sutin, a Pheu Thai MP for Maha Sarakham, said the Pheu Thai Party will take the lead in the three-day debate against the six target ministers while speakers from the dissolved FFP, the third-largest political party in the House, will be led by list-MP Pita Limjaroenrat.

Among the ex-FFP MPs who will miss the censure debate are former FFP secretary-general Piyabutr Saengkanokkul and spokeswoman Pannika Wanich who on Sunday held a talk titled "Outside-Parliament Censure Debate" as a curtain-raiser.

The FFP was dissolved on Friday by the Constitutional Court over the 191.2 million baht loan it took from former party leader Thanathorn Juangroongruangkit. The 16 executives were slapped with a 10-year ban from politics although it was announced on Friday the former executives would continue to work under the banner of the "Future Forward Movement".

Stithorn Thananithichote, director of the Research and Development Office at King Prajadhipok's Institute, said while the opposition camp may be weakened, the key player will still be the Pheu Thai Party.

"On the Future Forward part, the debate may be less lively because the party was just disbanded. But if they can connect with those working outside, they may create something new," he said.

On the government's part, he said that besides Gen Prayut, Interior Minister Anupong Paojinda is likely to face an intensive grilling from the opposition for allegedly causing conflicts of interest in the ministry.

According to the academic, the Democrat Party is likely to be lobbied hard by the coalition to toe the line when casting their votes. He noted the Democrat MPs are expected to be approached individually by key Palang Pracharath Party (PPRP) members.

"The government wants every target minister to get an equal vote of confidence. This is to avoid an early cabinet reshuffle," he said.

Suchart Chomklin, a PPRP MP for Chon Buri, said the party MPs have been warned that attendance is mandatory for every session of the debate but he admitted it may not be possible to ensure each minister receives equal levels of support in the votes to conclude the debate.

"We are the coalition government and we are undivided. But it's really difficult to give everyone the same number of votes. We'll try to keep the difference small, around 5-6 votes," he said.

Wirach Ratanasate, the chief government whip, said he will hold talks with small coalition partners to ask them to toe the government line after some indicated they will not vote for the "grey ministers" over whom doubts linger.

"I have no particular concerns for any minister because the allegations are nothing new," he said.

He also expressed confidence that Gen Prayut will be able to keep his temper in check. 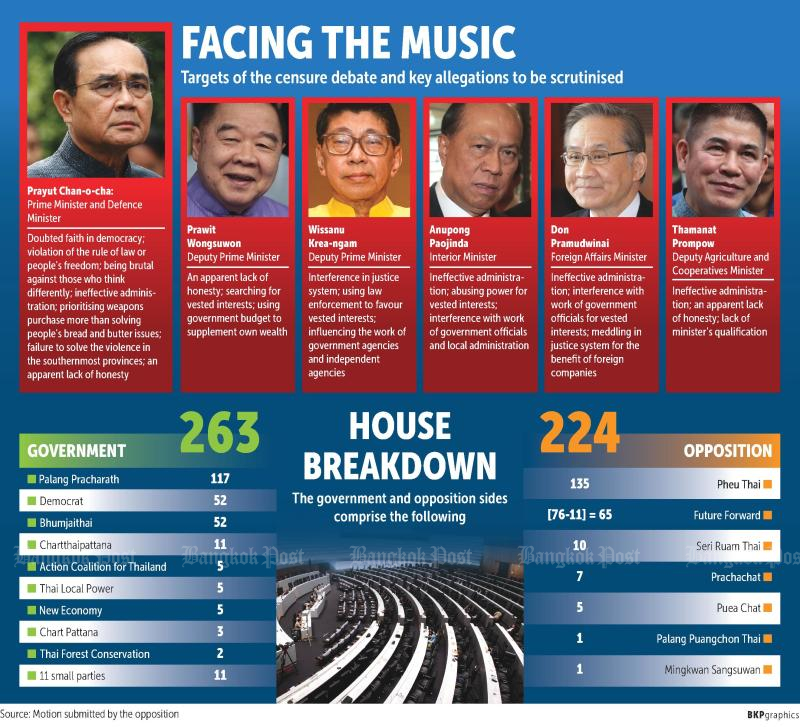 Democrat deputy leader Ongart Klampaiboon said the party will have to listen to the opposition's information before it decides how to vote because the censure debate is part of the checks-and-balances mechanism.

He noted that even though none of the Democrat ministers have been targeted in the debate, they are ready to defend themselves if allegations arise.

House speaker Chuan Leekpai said he has asked parliament officials to inspect the voting machines to make sure there are no technical glitches. He said he will make sure the opposition parties and the cabinet ministers receive their fair share of time.

The debate is scheduled to begin in the afternoon with Pheu Thai and opposition leader Sompong Amornvivat delivering an opening statement and outlining the charges against the prime minister and the five ministers.

Pheu Thai MP for Maha Sarakham Yutthapong Charasathien will then spend two hours going into the details of those charges before giving the floor to Mr Pita who will spend one hour addressing the House. Mr Sutin will speak next in his capacity of the chief opposition whip.