Thanathorn Juangroongruangkit (left), Piyabutr Saengkanokkul (top right) and Pannika Wanich launch the Progressive Movement with a campaign urging people to express their frustration over the handling of the virus outbreak. (Photos from @ProgressMov2 Twitter account)

Thanathorn Juangroongruangkit and Piyabutr Saengkanokkul of the former Future Forward Party has formally introduced the “Progressive Movement” to continue with their agenda after their party was disbanded.

The former leader and secretary-general of Future Forward went live on their new Facebook page on Saturday, exactly one month after their party was dissolved. 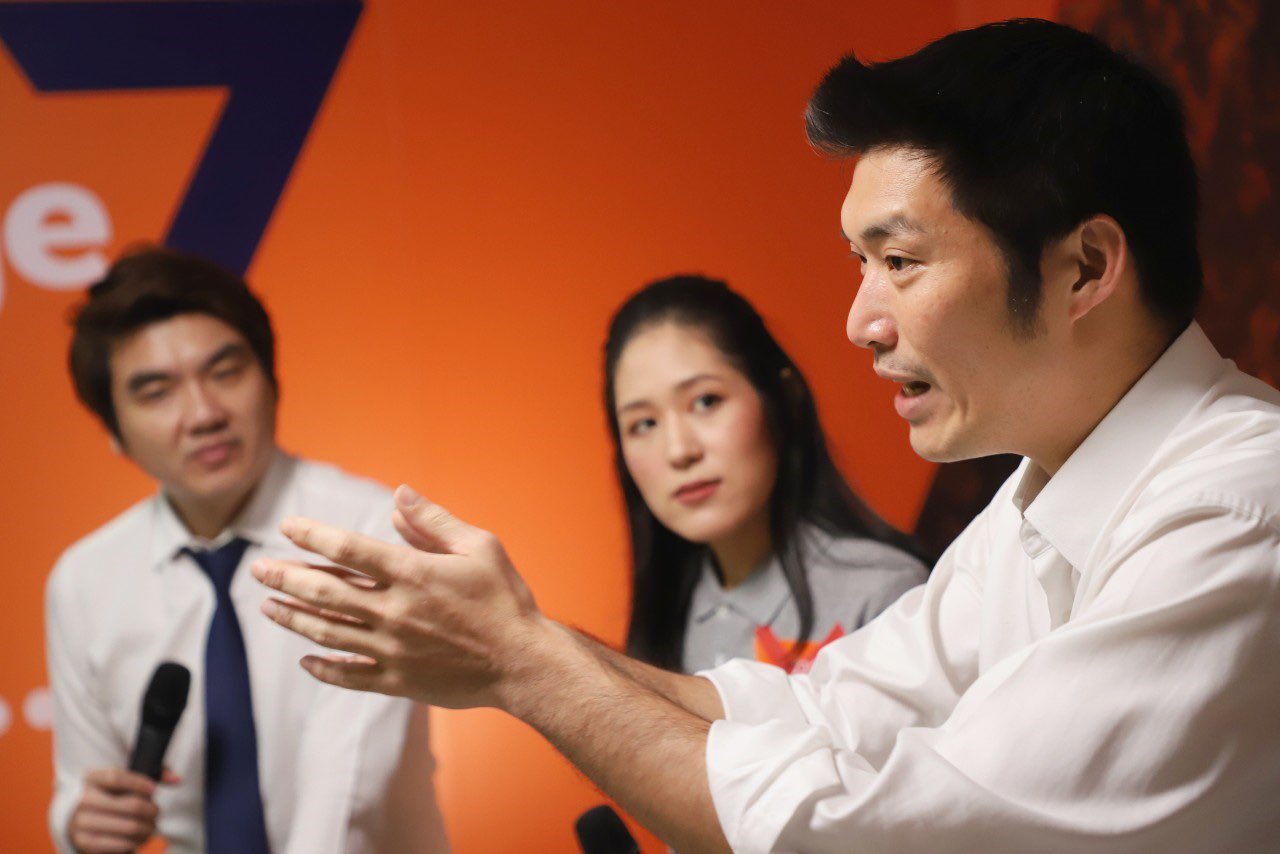 Thanathorn Juangroongruangkit speaks during the launch of the Progressive Movement on Saturday. (Photo from @ProgressMov2 Twitter account)

Mr Piyabutr said the group would use all online channels to dissemminate news and knowledge related to their agenda.

“Our three missions are to create a nationwide network, 'thoughts campaign' and campaigns for local elections at all levels,” the former law lecturer said.

Mr Thanathorn accused the government of discrimination — between Thais and foreigners, as well as between large businesses and everyone else.

“The government has yet to show responsibility for its mistakes. Social distancing cannot be implemented by everyone because many people are living from hand to mouth.”

He also pointed out discrimination in the treatments of people selling overpriced masks. “Only small vendors were prosecuted and jailed. Those close to a minister faced only a computer crime charge and was temporarily released.”

A lack of unity in the government caused people to lose faith in its ability to tackle the virus crisis.

To end this, he said, Prime Minister Chan-o-cha has to resign to pave the way for an appropriate person to tackle the Covid-19 crisis.

The new prime minister will have two agenda to be accomplished within one year — tackle the virus crisis and rehabilitate the country; and lead efforts to amend the constitution.

He floated what he coined "3 dissolved, 1 scrapped and 1 changed".

In his view, the three bodies that must be dissolved are the Constitutional Court, Election Commission and appointed Senate.

To be axed is a clause giving impunity to the coupmakers, led by Gen Prayut, he said. To be amended is a clause in the charter that will unlock a rewrite of a new one by an elected constitution drafting council.

As soon as FFP was dissolved on Feb 21, the two men announced it would be reborn as the Future Forward Movement. However, the name has to be changed because the election law prevents the use of the name of a dissolved party anywhere.

They said back then a two-prong approach would be used. The remaining FFP MPs, numbering 50-54, will join a new party, later renamed as Move Forward, and work in Parliament. At the same time, Mr Thanathorn and the 15 banned executives will form a movement and continue with campaigns to push FFP’s key agenda, with the focus on the rewrite of the charter.