Deputy Prime Minister Somkid Jatusripitak has sent one of his strongest political messages yet since taking the helm of economic affairs, saying any changes in the cabinet must come with increased efficiency.

“If the present team cannot get the job done, they should not stay on,” the deputy prime minister said in a keynote speech to launch a new project hosted by the Bank for Agriculture and Agricultural Cooperatives on Wednesday.

“If the new team has no ideas about how to do it, or cannot do it, then don’t come,” he added. “What is the point of change?”

The bottom line was, he said, the country needed to build a solid economic foundation to prepare for the recovery of the economy after the coronavirus pandemic ends.

“Don’t talk about a reshuffle. That is not important,” he said.

Mr Somkid then immediately stepped down from the podium.

His message was delivered amid expectations of a cabinet reshuffle after an imminent leadership change at the Palang Pracharath Party.

Deputy Prime Minister Prawit Wongsuwon has agreed to take over the party leadership from Uttama Savanayana, the finance minister who works hand in hand with Mr Somkid.

The change at the very top of the party is expected to be followed by other changes. This includes the post of PPRP secretary-general, currently held by Sontirat Sontijirawong.

With changes in the cabinet likely to follow, the future of the Somkid-led economic team is uncertain. (continues below) 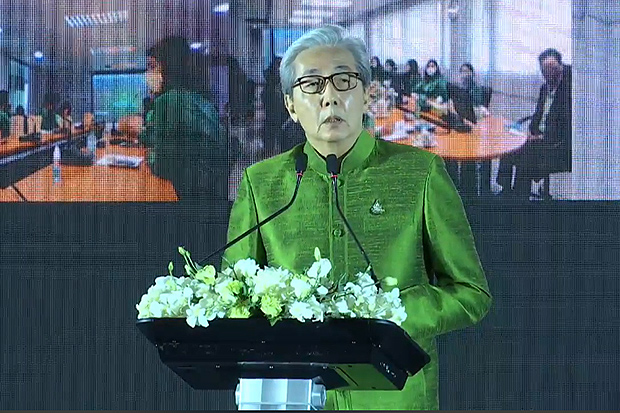 Mr Somkid on Wednesday launched the New Gen Hug Baan Kerd project to build up the local economy by encouraging the younger generation to develop their communities with financial support from the bank.

He warned that more businesses in Thailand will shut their doors next month as the global economy has still not recovered from the slump caused by the Covid-19 pandemic.

The deputy prime minister said building a stronger local economy and foundation based on the sufficiency economy concept was essential to prepare Thailand for the recovery of the world economy.

The sufficiency economy philosophy was initiated by the late king Bhumibol.